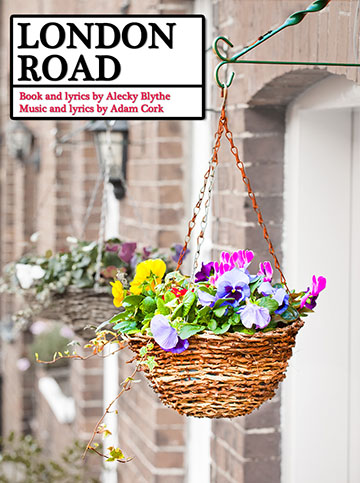 It seems entirely appropriate that my first theatre review for this blog should be of an amateur production. I somehow missed London Road when it premiered at the National Theatre and although there has been a film since it stuck me, from what I had read about it, that here was a uniquely theatrical piece which deserved to be seen as intended – on a stage. Thus I was happy to learn that SEDOS were making the bold attempt to bring this piece to the intimate setting of the Bridewell.

It’s not the most obvious premise for a musical; a community in Ipswich dealing with the aftermath of a serial killer murdering several prostitutes. But then who would have thought that a musical set in 1840s Paris about the poor and disaffected would have had any traction? What makes this piece stand out is its use of verbatim theatre techniques where the exact words spoken by the original participants are transcribed and worked up into a script by a skilled dramatist – here Alecky Blythe. David Hare has written pieces in this vein and London’s Tricycle Theatre has produced verbatim theatre about Guantanamo Bay, the Hutton enquiry and the Tottenham Riots. I’m not sure whether it has even been tried as a musical before and that, of course, it what gives it such stunning originality.

I’ll confess it took me a good ten minutes or so to get my ear tuned in properly. We’re just not used to hearing hesitations, repetitions, half-finished thoughts and interruptions when set to music. By the time the narrative reached the Christmas market (“Everyone is very very nervous”) though, it all began to seem entirely natural and, dare I say it, even normal. The technique gave a rhythmic muscularity to the unfolding narrative and helped the audience to understand that these were real people struggling to come to terms with terrible crimes happening in their midst. I thought the first half was the stronger with a particularly chilling first half finale (“It’s A Wicked Bloody World”) which featured some explosive choral work. By the second half the techniques being used were less unsettling and (slightly) more familiar. Highlight for me here was the remarkably poignant silence, held for what seemed forever, as events were recounted from the point of view of three prostitutes.

The use of video (particularly in the “live” sequences) was extremely well done and lighting and sound enhanced the experience for the highly appreciative audience. As for the performers I can only wonder at their prowess. This was a true ensemble piece, cast perfectly, and one which must have stretched the capabilities of all concerned. I used to think Sondheim was tricky until I saw/heard this! It would be invidious to single anyone out and to do so, I think, would entirely miss the point. Director Matt Gould and his entire team can feel justifiably proud in pushing back the confines of amateur theatre – I’m even kind of glad that I did miss it at the National.