Have you ever read reviews after watching a show? And have you ever felt: “Did they see the same show, I did?” Or “Have they even seen the same show as each other?” Such were my feelings after going online to see what others thought of The Divide – “a narrative for voices” by the prolific Alan Ayckbourn currently at the The Old Vic.

Some context first. As the astute among you will have seen this is not designated as a play and is not even listed as such amongst the official canon of works on Ayckbourn’s website. Even so it has now been presented on stage in both Edinburgh and London but it is more in the nature of a novel/graphic novel running originally to some 80,000 words.  Set in a bleak dystopian future where men and women are segregated, the narrative consists chiefly of the diary extracts of the two main protagonists, sister and brother (Soween and Elihu), supplemented by council minutes, court transcripts, emails and letters, etc. In keeping with the wide ranging freedom afforded by a full length work of prose, the piece ranges across a multitude of settings and contains a host of characters. The first rehearsed reading took 8½ hours. At Edinburgh the piece was divided (how apposite) into two parts which ran for a total of 6 hours. Its present incarnation at the Old Vic stops just shy of 4 hours. But then that’s what happens when a piece of prose is dramatized – the RSC’s famous production of Dickens’ Nicholas Nickleby ran for nearly 9 hours and this was seen as one of its strengths.

Not so here for many critics. Edinburgh reviewers were consistent in condemning the piece as too long and this seems to have informed the decision to make the Old Vic version leaner. Yet there is still dissatisfaction. Trade magazine The Stage brands it “four hours long, and devoid of drama”. The Evening Standard opines that “it warrants further trimming”. Both reviewers award two stars. On the other side of the critical divide (!) both The Times and The Telegraph opt for four stars with the former stating “I’d say the time flies “and the latter claiming that “a lumbering dud has become a spry delight”. Plus ça change!

Of course length is not the only consideration. There are also comments that there is far too much exposition (sorry, but that IS the nature of the piece) that characters do not develop (true, some do not but that is by no means universal) and there is a lack of conflict (patently not the case). The problem here is that some critics are trying to impose the structure and tropes of a play onto something which is not a play and was never intended to be.

I wrote it under very extraordinary circumstances because I just wanted to write something I couldn’t even see myself directing. I just let my mind go into free fall – in the sense that I threw my constructional kit away – and I just wrote something that went on and on and which still hopefully obeyed the rules of narrative and character, but that was probably unstageable. It was like nothing I had ever written before. (AA)

The critics are pretty unanimous though when it comes to the staging, the design and the acting all of which come in for considerable praise.

So where do I stand in all this? Difficult. I don’t think it’s any secret that I’m an Ayckbourn fan and I see this piece as the culmination of a long strand of dystopian fiction in his work – plays such as Henceforward…, Comic Potential and Surprises among others are all set in future imperfect worlds. However, they are still primarily about personal relationships and I don’t think there has been an attempt to picture a whole community in this way before – though the early 1960s piece Standing Room Only is set in a world where a family are living on a double decker bus with the whole country being in permanent gridlock. So it’s very wide in scope and there are a lot of characters and concepts to introduce. I think the current production actually does this with some verve and even wit. Whatever the feelings about overall length there is no doubt that the piece is pacy, energetically staged and beautifully lit. The use of video projections on curtains to suggest a waterfall and to display the various diary entries and Soween’s school essays are masterfully done. The small orchestra and choir provide empathetic underscoring at key moments and the monochromatic colour scheme of the costumes and settings enhance the key idea of the division between the genders. In all, director Annabel Bolton has done a remarkable job in pulling together something which even the author admits is basically unstageable.

Nor do the performances disappoint. As Soween, Erin Doherty is utterly convincing as the young heroine who grows in both age and understanding. She is delightfully gauche in her dealings with others and convincingly bewildered about the changes that are starting to take place both to herself and the society she lives in. The rest of the predominantly female cast is universally excellent with the stand outs being Weruche Opia and Finty Williams. I was, perhaps, less convinced by the male characters – possibly because there were relatively fewer opportunities to observe their side of The Divide (a result of the editing?).

My only real gripe was the extended coda in the last twenty minutes when things were allowed to wind down far too slowly. While this gave a sense of what happened after the further shifts in this society, the tension evident earlier had gone and it all seemed a bit too cosy for comfort. In the main (though I wouldn’t go as far as this five star review which seems to have no criticisms at all) I’d say it was an interesting experiment, even a bold attempt to do something entirely different and, if forced to put a rating on it, opt for something like 3.5 stars. Personally I look forward to the mooted 2019 publication of the project in book form – far closer to its original intention and something which can be pored over at leisure. Whatever else it is heartening to see Ayckbourn still pushing back the boundaries of the dramatically possible – one thing on which, perhaps, we can all be united. 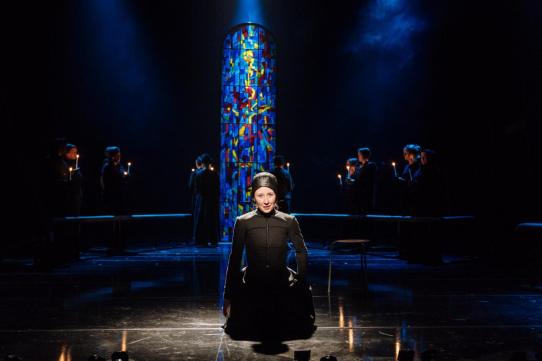 One thought on “Divide? It Certainly Did!”