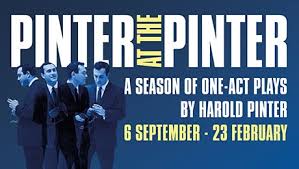 Harold Pinter (like Beckett and Stoppard) is one of those giants of the modern stage that is often spoken of in hushed reverential tones, analysed to near extinction and has become a guiding light to many contemporary actors. Gielgud, Richardson, Ashcroft and Olivier all appeared in his works during his lifetime and so it was no surprise to see the roster of star names lined up to pay homage to him in the season of his shorter works playing at the Harold Pinter Theatre (formerly The Comedy Theatre) in London’s West End. Here was a very rare chance to see a body of seldom performed work by some of the most skilled exponents of the dramatic art in a coherent season. The added bonus was that even if you found a particular piece was not working for you then there would soon be another one along which might.

A few weeks ago I went to see Pinter One and Pinter Two and enjoyed the talents of, among others, Antony Sher, Papa Essiedu, David Suchet, Russell Tovey and Maggie Steed. Part One was a collection of nine of Pinter’s most political works which might best be described as harrowing. Featuring torture, interrogation, cruelty and manipulation, it was, I thought, a surprising set of choices with which to open the six month season. They did, however, immediately re-establish Pinter’s heavyweight credentials. The stand out piece was One For The Road (definitely not to be confused with Willy Russell’s play of the same name) featuring Sher as an interrogator (and probably torturer) who is perhaps more troubled than his victim. Most baffling, and taking up the whole of the second half, was the Lia Williams directed Ashes To Ashes. This was a duologue performed by Essiedu and Kate O’Flynn about a couple agonising on the state of their relationship and the cruelty of the outside world. Very downbeat and very bleak.

Part Two by contrast was much more fun – hard for it not to have been really. Both featured one act plays which came from the early 60s and dealt with the theme of relationships and infidelity. The Lover presented a couple (Hayley Squires and John Macmillan) playing marital games…or were they? Undermining the social conventions which would have been typical of the time, the piece now seems somewhat dated but was still good fun. Russell Tovey turned up very briefly as a cheery milkman. All three performers then returned in the second half in The Collection along with a supremely camp David Suchet who stole the show with some hilarious one liners especially in his dealings with an equally impressive Tovey.

This weekend I was treated to Parts Three and Four and here is my (rather fuller) review of these plays.
The Pinter at the Pinter season from the ambitious Jamie Lloyd Company has reached parts 3 and 4 and continues to provide a comprehensive overview of the late writer’s shorter pieces. It has attracted an extraordinarily high calibre of performers and the latest additions to the rosta are no exception. Lee Evans, Tamsin Grieg, Meera Syal, Keith Allen and Tom Edden…..and that’s just Pinter 3! As might be expected from such a talented team there are many powerful moments but, unfortunately, there are also some longeurs.

If there’s an overarching theme evident in the eleven pieces that make up section 3, it is that of communication problems. Lee Evans addresses an empty chair (substituting for a friend/rival) in the poignant Monologue, he and Meera Syal are all misunderstandings and confusion on the telephone in Apart From That, Tom Edden agonises over the contents of a cryptic note in Girls. Pinter examines the idea that words are used to both explain and conceal, that they cloak us in double meanings and cause misconceptions: “One way of looking at speech is to say it is a constant stratagem to cover nakedness”.

Nowhere is this more evident than in the two pieces that bookend the performance and which both feature Tamsin Grieg and Keith Allen on fine form. In Landscape a couple sit largely motionless in a kitchen. She never looks at him and delivers a fractured monologue into a microphone in a soft Irish brogue reminiscing about a long gone encounter on a beach. He does look at her but talks about mundanities and inanities in a coarse Cockney voice and to which she never responds. They are in the same room but miles apart spiritually and emotionally. It is a powerful piece but the lack of plot and its near motionlessness has a soporific effect which perhaps should have been avoided in an opening piece. Rightly placed to close the performance is A Kind Of Alaska, in which a young girl who has been in a narcoleptic state for 29 years wakes to find herself a grown woman (Greig) cared for by her brother in law doctor (Allen) and a devoted sister (Syal). Grieg is magnificent in this piece cleverly capturing the child like qualities of the young Deborah in her current middle aged body and her difficulties with coming to terms with a family history which has passed her by.

For the rest Pinter 3 is an odd lightweight confection – many of the plays are little more than revue sketches and hail from 1959 when Pinter was still honing his craft. Lee Evans (purportedly retired) is good value here though I did feel he was imposing some of his “schtick” onto thin material in order to make it worthwhile. While these pieces are amusing enough they lack the depth and substance of the two main plays. Many of them are short monologues (appropriate given the general theme of non –communication which pervades) which simply leave one craving for more.
Pinter 4 is somewhat more robust in that (as with Pinter 2) there are just two one act plays to contend with. The first of these is Moonlight which some critics have argued probably comes closest to summing up what is meant by Pinteresque. By turns bleak and dark, comically savage, whimsical, elegiac and (what else?) enigmatic it concerns the deathbed reminiscences of Andy – a ferocious Robert Glenister – and his relationships (or lack of them) with other members of his family and his friends. His wife is long suffering, his two sons are estranged and his daughter is (possibly) a ghost. I was reminded of the characters in Death Of A Salesman though without the depth and development which Miller brought to bear. In the end I found the play rather exasperating though beautifully directed by Lindsey Turner. In particular I thought it wasted the considerable talents of Janie Dee who appeared all too briefly as Maria, Andy’s mistress and his wife’s best friend.

Fortunately she had far more to do in the second half’s Night School where she and an equally impressive Brid Brennan play Milly and Annie, sisters, landladies and a comic double act in the vein of Meg (from Pinter’s own The Birthday Party). Forever feeding everyone cake and hilariously bickering about who should eavesdrop on their tenants they welcome back into the fold Al Weaver playing their nephew Walter (see Stanley – again from The Birthday Party) a petty criminal who has been inside. While away they have let his room to Sally (Jessica Barden) ice cool and detached and who may be a teacher or a cocktail hostess or possibly both. She is clearly a woman with a past – and indeed a present – and becomes the object of Walter’s infatuation while she herself remains distant and emotionally disconnected. The night school she attends “three nights a week” turns out to be a seedy nightclub and when her secret is about to be exposed by Solto (Glenister – ferocious again) she absconds. 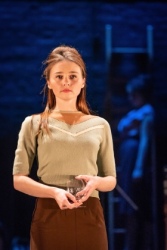 It strikes me that, if anything, Night School is perhaps the more typically “Pinteresque” of the two pieces. The sense of domestic claustrophobia, the air of unstated menace, the enigmatic female, the inability to communicate are all tropes which appear in other early(ish) Pinter plays. That said it is played on a stage where the wings are fully displayed and the lighting design of Jon Clark is used to very good effect; both emphasize the inherent theatricality of the piece. That the play is akin to a sustained jazz riff is highlighted by having the action underscored with live drumming from Abbie Finn. Directed by the up and coming Ed Stambollouian it ultimately satisfies rather more than Moonlight or many of the pieces which make up Pinter 3. It will be intriguing to see where the final three sections of the season will take us.*

Apparently Penelope Wilton is joining Pinter 3 later in the month to perform a monologue called Tess which Pinter wrote specifically for her so my advice, if you are going to attend, is to wait for one of those performances. It seems odd to be adding in an extra treat at a later stage but I can only assume Wilton was not available for the full run.; I’m sorry to have missed her. Anyway, next up are Jane Horrocks and Rupert Graves in pieces directed by Patrick Marber….it’s the gift which keeps on giving.

*This review first appeared on the website of Sardines Magazine.