There are dozens of shows on in London at any one time yet it is rare for many of these to belong to a broad category of new writing. West End producers, given the sky high level of theatre rents and other costs associated with mounting a production, tend to play safe circulating and recirculating tried and trusted formulae (cf. the juke box musical), putting on revivals of classics (Shakespeare, et al) or populating their production with television “names” (just about any panto you care to point at). There seems to be little room for productions without an immediately obvious pedigree and it has become harder for anything new to get a foothold. If new writing is scarcer than the proverbial hen’s teeth then new writing by a new writer is even less likely to be discovered – at least in the commercial sector of the capital’s theatre. Thus the addition of Natasha Gordon to the roster of new writers is a welcome addition. Her first play Nine Night has just opened in London; here’s my review.

Following its successful run at The National Theatre last spring, Natasha Gordon’s play Nine Night about the Jamaican way of death comes to the Trafalgar Studios in a well-deserved transfer. Lauded as the first West End play by a living, black female writer it is, no doubt of it, a highly accomplished piece of work that asks important questions about the legacy afforded to the Windrush generation – the scandal that broke earlier this year ran concurrently with the play’s premiere.
Gloria, the family matriarch, arrived in Britain as part of that generation leaving behind her life in Jamaica as well as her young daughter Trudy. Since that momentous decision she has built a new life, acquired two more children (Lorraine and Robert) and a house in North London; as the play begins she lies dying upstairs. Her demise is followed by the traditional Caribbean nine night wake. Neither Gloria nor the wake are ever seen but the influence of both is keenly felt as the family and various visitors gather, drink, reminisce consider their futures, dance, argue and eventually fight in the wonderfully detailed kitchen with fully working appliances – hats off to designer Rajha Shakiry.

Central to the action is Gloria’s second daughter Lorraine who has housed and cared for her dying mother, brought up her own daughter Anita and who is now a grandmother to nine month old Rosa – unseen. Lorraine has basically sacrificed her own life to care for and support others. She is heartbroken by her loss but stoically plods on, hosting the wake, organising the funeral arrangements and dealing with the family angst. That this family is a matriarchy is left in little doubt. This is emphasised by the arrival of Aunt Maggie a woman with an opinion on anything and everything (and who undoubtedly has all the best stinging one liners) and a later appearance by abandoned daughter Trudy who flies in with a suitcase full of Jamaican goodies and a heart full of resentment which eventually boils over into overt rage. The men, by contrast, are somewhat less forthright in the persons of feckless brother Robert and kindly laid back Uncle Vince.
The cast does not have a weak link and integrate so well that they are fully believable as a family unit. Author Natasha Gordon herself plays Lorraine (a change from the NT production) and as such she does so with an outstanding sense of empathy for her character’s various predicaments. A growing sense of anger and resentment towards the other family members culminates in a strong final scene where Lorraine grabs a kitchen knife and looks set to do some permanent damage. Sister in law Sophie tries to calm her with yoga at one point but it is clearly not working. Hattie Ladbury’s performance as Sophie, the only white member of the cast and the family’s outsider (a neat reversal of stereotypes), was very engaging. Sophie is eager to immerse herself in a culture of which she can never truly be a part but clearly has her own demons – especially when she announces that she is pregnant at the age of 45. The plum role, however, belongs to Aunt Maggie and Cecilia Noble has received rave reviews for her portrayal of the domineering old lady; at the performance I saw the part was taken by understudy Jade Hackett. She acquitted herself extremely well, moving around with a sense of increasing age and weariness and delivering her lines with an acute sense of timing; several of her opinionated remarks brought the house down. I notice that Hackett is also understudying both Lorraine and Trudy so she truly has her work cut out. Michelle Greenidge as Trudy was a real “force of nature” performance. Her first sudden appearance momentarily has the audience believing that she is the ghost of the departed Gloria but she is clearly entirely her own woman. The character’s arrival forces the crisis at the climax of the play and the consequent possession of Aunt Maggie by Gloria’s departed spirit. 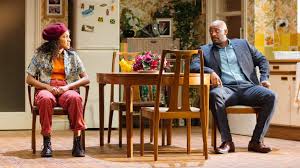 At this point the play becomes a slice of magic realism and this is suitably aided by moody lighting designed by Paule Constable and an insistent thrumming soundtrack from sound designer George Dennis. As with all the other elements in the play (costumes, props, etc.), these serve to highlight the outstanding nature of the piece all brought together under the excellent direction of Roy Alexander Weise – a still young director on whom it would be sensible to keep an eye. Sensibly played through without an interval the play is by turns truthful, well plotted, hilarious, demanding and draining. Natasha Gordon’s debut is going to be a hard act for her to follow but already it is keenly anticipated.*

I would add to the above that the audience for the play was noticeably different in composition from that at the average West End performance. Encouraging new writers and opening out the dramatic experience to a wider range of people can only benefit all theatre goers encouraging diversity and experimentation and helping to keep ticket prices affordable. It makes good business sense and with West End gross box office revenue in 2017 reaching £705,000,000 (source: The Stage) there is a big prize to strive for. Let’s hope that this trend continues into 2019.

*This review first appeared on the website of Sardines Magazine.