For a number of years now (actually 14 – yikes!) I have worked either full time/part time as employed/freelance in the world of personal finance education. A popular task to set young people involves asking them to imagine the life story of a £5 note, the sort of hands it might pass through and the various purposes to which it might be put. It was, therefore, with a degree of professional interest that I noted the arrival on the scene of a new(ish) British musical called simply Fiver and based on this exact premise. On what was one of the hottest evenings of the year I visited Southwark Playhouse to catch up with the opening night. Here’s my review:

Fiver is an intriguing British musical by Alex James Ellison and Tom Lees, constructed as a series of musical vignettes as the titular bank note passes through the hands of a whole host of people. A busker played by Alex James Ellison inveigles a fiver from an audience member and sets the wheels in motion. He then becomes a narrator/chorus figure commenting on the action and bridging scenes. Incredibly, all the other roles are played by just four multi talented performers including at one point all the guests arriving for a baby shower. With just a change of accent and/or a slightly different body stance the performers conjure up a whole gallery of characters which keep the story moving along; Dan Buckley is particularly strong in this regard. Sometimes we lingered with the note’s recipients and found out more about their lives, at other points the note changed hands rapidly and we got just the merest glimpse of the temporary owners of the money. Thus a busker’s reward became a homeless person’s lifeline used to purchase a scratch card and then given in change by the shopkeeper to a customer who tucked it into a birthday card as a present…. and so on (and that’s just in the first quarter of an hour). The note is used for buying, gambling, donating, borrowing, present giving and as payment; it is lost, found, washed out to sea, used for snorting coke and narrowly avoids destruction in a washing machine. It maybe that the writers are using the premise as a huge metaphor for the vagaries and resilience of life itself but there is no doubting that the structure works well on either level. 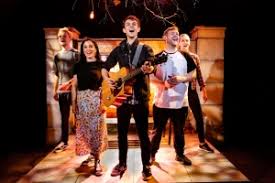 So what’s not to like? Well unfortunately quite a bit; although I really wanted to root for this show there were a number of minor faults which manifested themselves and detracted from the overall experience. I hasten to add that there isn’t anything that isn’t fixable with a bit more consideration and tweaking but I can only judge on what I actually saw. Judging by the rapturous reaction of most of my fellow audience members I may well be in a minority but in the interests of trying to help a good show become a great show I thought I should raise the relevant issues. It seems appropriate to present my findings on this monetary odyssey as a balance sheet (albeit the reverse way round) 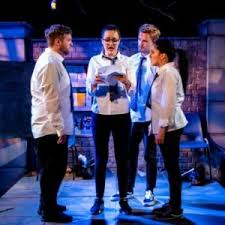 Research revealed that the show had been a great deal shorter in its first incarnation (apparently forty minutes has been added in) and I think it should have been left at its original length rather than stretching the premise to a full two hours which was too long to support the central conceit. I would strongly suggest the unnecessary subplot, which involved a teacher being stalked by a letter writer, should be removed. It added nothing and was only very tenuously linked to the main arc of the story; it might well form the spine of another musical piece but had no place here. That said it did include one of the strongest musical numbers “Gotta Keep My Head Down” so I can quite understand why it was included on that level. Another number that regrettably needs to be sacrificed in order to preserve the overall integrity of the piece is “Press Hashtag To Record”. A standout number in terms of composition (shades of the master, Sondheim) and performance (hilarious delivery by Aofie Clesham) it simply had no place in this show. Indeed the whole of the second half needs careful rethinking. The “explanation” about timescales at the beginning was especially confusing. Beyond that there is probably room for a little reordering of material – the three piece song “A Fiver’s Destiny” could usefully be repositioned (and added to?) more evenly through the show for instance. There also needs to be tighter grip placed on the direction and staging – perhaps writer/MD Tom Lees needs to allow an independent eye to be cast over proceedings!

I do hope that, wearing my dual hats of theatre critic and financial education consultant, we hear more of this show in the coming years. That it is highly original, cleverly constructed and bursting with possibilities is in no doubt. There is just now a need to regroup and invest time in developing a first rate product – one with immediate interest and long term rewards. On balance, I think there is the makings of a very good show here – it is now time to speculate in order to accumulate!

Production images: Danny with a Camera

One thought on “On balance…..”