So, how did you mark Brexit Day? Did you join the crowds in Westminster Square to listen to triumphalist rabble-rousing? Did you join the elite at 10 Downing Street to eat British Yorkshire pudding canapes (no French champagne or Belgian beer, I assume) Did you stay at home and crawl under a duvet?…..Well, thank you for asking. Actually, I spent an evening in that definition of pre- Brexit Little England, the seaside town of Walmington-on Sea. For I was at the Dad’s Army Radio Show which launched its second tour with an evening at the British Library; and what an absolute delight it turned out to be.

The basic idea couldn’t be more simple if it tried – indeed it invoked the make do and mend ethos of the War years. Take some well-loved (even revered) comedy scripts that have stood the test of time and reproduce them in a live format. That’s it really. Staging and scenery are practically non-existent. Locations and props are recreated through a detailed soundtrack and the rest is left to the audience’s imagination; as the pieces are so well known it’s pretty easy to fill in the visuals in your head. I did hear one American lady afterwards saying that she found the show difficult because she had no point of reference. The rest of us, however, had the proverbial whale of a time and familiar phrases (“Stupid boy!” in particular) were joyously received.

The radio show format is one that has been tried before, of course –  a stage version of “Round The Horne” springs to mind. What really makes this a special evening though are the superb performances and the twist/surprise that all of these familiar characters are played by just two people. David Benson and Jack Lane dress in army fatigues but let their voices and faces do the heavy lifting. The vocal impersonations are nigh on faultless and at times the ghosts of Lowe, Le Mesurier et al seem to inhabit the performers; if it wasn’t so funny it would be quite a chilling experience. Benson particularly shines when he is Sergeant Wilson – all languid vowels and flouncing fingers. And of course, he doesn’t stop there. He’s also gentle Godfrey and a particularly manic Frazer – his catch phrase “We’re all doomed” seemed to have a particularly contemporary resonance last night. Lane is equally impressive. Although he is physically nothing like Arthur Lowe, his turn as Captain Mainwaring (complete with pompous harrumphing) is spot on. He makes a fine immature Pike  and he absolutely nails the slight whistling sound and vocal confusions which mark out Corporal Jones. 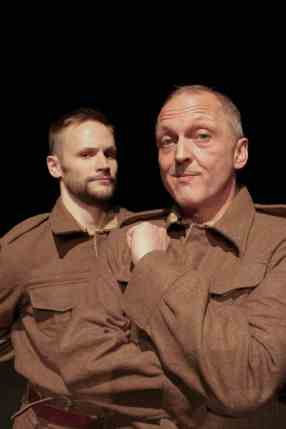 Initially, it did seem odd when the performers had patches of dialogue where they spoke to themselves but after a few minutes this didn’t seem to matter. Indeed, in a particularly delightful section Benson rapidly and seamlessly switched from Vicar to Verger to ARP Warden with consummate ease (at least he made it seem so). This was, if anything, outdone by Lane in an extended scene where he played both Mainwaring and his dissolute brother, Barry. The sheer speed with which the pair morphed from one personality to another was quite breath-taking and there was never any doubt who was speaking even when there were half a dozen characters present. The one sad omission was not hearing Walker but as the two scripts used for the show were penned after James Beck’s untimely death his character was not featured; I’d be prepared to bet good money that both Benson and Lane can “do” that character too… and consummately at that.

Normally there would have been three scripts performed but as this was a tour launch, we were treated to just two (though no complaints about that). The evening was rounded off with a short Q and A featuring Frank Williams, the original Vicar and one of only two surviving cast members, who regaled us with tales of filming the show and the various performers that bonded to become the well known team which still inhabits our TVs on a Saturday night. I shall long treasure David Benson corpsing in front of Williams who was sitting in the front row watching the actor mimicking him as the Reverend.

Not wishing to get all political on this but the ironic timing of this evening as we waved goodbye to the EU was not lost on me. Here I was watching a show which first began before we had even joined the EEC (as it was then known) and which looked back even further to a time when Europe was bitterly divided; let’s hope we’re not heading that way again.  The coming weeks/months are probably not going to be easy, but humour is a universal bonding agent. So it is with absolute pleasure that I can say that out there – touring round – is a show which can lighten your mood, give you a hearty laugh and at which you can admire the consummate skill of the performers involved. The tour starts next week and lasts until April (details here). They seem to be playing everywhere…although I couldn’t find Walmington-on-Sea listed; that did really exist …. didn’t it?