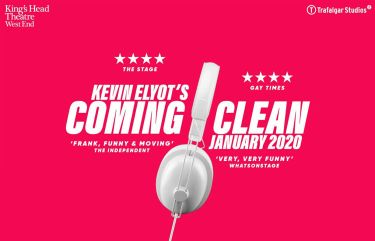 Scrounger by Athena Stevens (Finborough Theatre) This piece is, in essence, a stand-up (or, to be more accurate, sit-down) routine about a real incident which happened to and is narrated/acted by the author. It is a tale of disability, company incompetence, injustice and perseverance against the odds. A second actor, who was extremely good, played every other role. Interesting and quite memorable but rather uneven veering from comedy to supressed rage. I did not see the point of starting the show by haranguing the audience who had actually turned up to support the venture – even if the anger against the world at large iss justified ***

Persona by Ingmar Bergman adapted by Paul Schoolman (Riverside Studios) A tedious, confusing mess which was not even well staged. A severe case of “The Emperor’s New Clothes” *(and that’s for the music) Full review here

Dad’s Army Radio Show based on the scripts of Jimmy Perry and David Croft (British Library) Tour launch with two episodes and a Q and A. Remarkable. Full review here ****

BEST OF THE BUNCH (by some way)

1917 directed by Sam Mendes. A thrillingly constructed war movie with shades of every other great war movie. Everything worked magnificently to provide a seamlessly visual and auditory treat and, towards the end, it was extremely moving. Particularly outstanding is the cinematography of Roger Deakins and even though it clearly can’t have been done as one long tracking shot this effect gave the film such immediacy and contact with the viewer that it was the cinematic equivalent of a book that’s impossible to put down. If this doesn’t clean up at the Oscars then there ain’t no justice *****

The Body: A Guide For Occupants by Bill Bryson The usual Bryson mix of fascinating fact and anecdote **** Full review here