As the reviewing lark has gathered apace the engagements diary has been filling rapidly. So, in order to clear some backlog, I decided to attack the growing list in one fell swoop. The result was a very varied and totally theatrical weekend. (Sorry if you were looking at the title and expecting tales of war, famine, pestilence and death – I can safely leave that to the corona virus and subsequent hoarding of toilet paper)

Friday night it was off to a, to me, new venue the Jack Studio Theatre in Brockley, south east London. This turned out to be a very pleasant little venue – attached to a pub – which puts on an eclectic mix of drama. In this case it was a trio of Samuel Beckett plays – namely Not I, Catastrophe and Rockaby produced by Angel Theatre Company which has previous form in this area. These pieces are far from easy to engage with (Not I is the one with the disembodied mouth) and, to my mind anyway, are not so much pieces of drama as dramatic poems which meditate on the meaninglessness of life and the difficulties of communication. Slickly performed and carefully directed the pieces were cleverly structured to flow into one another and were warmly received by an audience of what were clearly Beckett aficionados – if the subsequent Q and A session was anything to go by. If I’m honest I can’t say they did much for me. I find Beckett’s full-length works (Godot, Happy Days) more to my taste so perhaps it’s something to do with being left unsatisfied by what can seem unfinished rough sketches. In all, I found I had a similar reaction to the previous Beckett triple bill I saw at the Jermyn Street theatre a few weeks ago (click here) which also met with a generally high degree of critical approval …so perhaps it’s me.  Last year I worked my way through the short plays of Pinter (click here and here) and this year seems to be shaping up for a Beckettathon. I suppose I should really squeeze in Endgame at the Old Vic but if I’ve learned anything from Beckett it’s that life can just seem so short and having seen Michael Gambon and Lee Evans perform this a few years back I think anything would be hard put to outclass that production 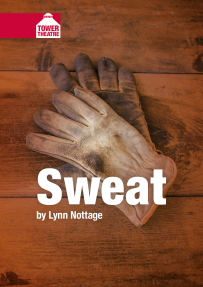 Sweat is a play I wanted to see but managed to miss when it was on in London not long ago – it was one of those shows which was blessed by being able to post regular “House Full” notices. So, it was to a welcome revival of this dark and dazzling play at the Tower Theatre that I went on Saturday afternoon. The play looks at the dark underbelly of life in America through the prism of steel workers in an industrial town. The actual setting is a local bar and it is here that the protagonists come to wind down, celebrate, commiserate and eventually, fight and fall apart. A most realistic setting, coupled with firm direction and strong acting drove this tale to its inevitably bleak conclusion. If I felt it took some time for the audience to invest in the various tragedies that were unfolding the second half, particularly, kept us immersed and engaged.

Once upon a time…. a feisty princess might have been something quite innovative but now, meh! Once Upon A Mattress is a late 1950s American musical which I saw at Upstairs at the Gatehouse on Saturday evening. It could certainly not have been more different from the American drama I had seen that afternoon. Based on one of the flimsiest of Hans Christian Andersen’s fairy tales (The Princess And The Pea) the story line had been fleshed out to breaking point and took for ever to get to the central test, which in itself wasn’t particularly dramatic – then suddenly everything was wrapped up in minutes. The songs were pretty unmemorable, even if the music was by Richard Rogers’ daughter Mary and the lyrics sometimes inaudible; I’m afraid the wide stage of this particular venue does little for putting on a musical. Perhaps the show was seen as daring in its day – one of the characters was pregnant but (horror of horrors) unmarried – but to me it was rather a ragbag of ideas; at least the costuming emphasised that particular element.  The direction of the show bordered on the pantomime and I found the whole thing unremittingly twee.

At Sunday lunchtime I attended a small book launch for Michael Coveney’s account of amateur theatre in the UK. Entitled Questors, Jesters and Renegades it was published last week and features quite extensive coverage of a number of groups and individuals with whom I have been associated over the years – as I discovered from a quick glance at the index. Michael had interviewed me (and treated me to a very passable lunch) not long after the completion of the RSC Dream project so it was nice to be invited along to celebrate the launch of the resultant book. It was a select gathering and it took place at Ealing’s Questors Theatre – a local venue which I had never visited before and which, if it wasn’t quite so far away from home, would be one where I could see myself working. It was a pleasant couple of hours spent in convivial company chatting to the likes of legendary critic Michael Billington and eased me in to the rest of the day’s events. 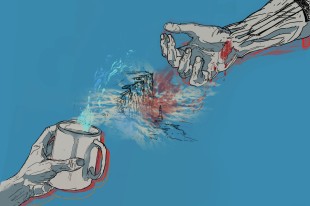 Next it was across the river for a Sunday afternoon matinee performance of Can I Help You? at the Clapham Omnibus. This was another venue new to me (there’s a surprise) and I have to say it prompted me to think about starting a list of comfortable fringe venues – this place would certainly feature. All too often lately I’ve found myself sitting on hard wooden benches or flimsy fold up seats – understandably so when the venues’ budgets are so limited. Clapham Omnibus’s seating is, by contrast, positively luxurious and feeling comfortable certainly helped me to appreciate the play. This was written by the late Philip Osment and is highly recommended. It features two characters who meet on Beachy Head late at night. Both have troubled souls but talking through their issues brings them some hope and redemption. I found the production mesmerising and engaging and was forcibly reminded of the clifftop scenes in the latter part of King Lear. The two superb actors played not only their central character but also took on personas from each others’ pasts. Staging was very simple, lighting and sound highly effective and the note of hope at the end was a welcome relief from some of the more doom-laden productions I have seen recently.

My final port of call of the weekend was Battersea Arts Centre (yes, you’ve guessed it –  another previously unvisited venue) for the 10th Annual Offie Awards Ceremony. These awards are given out by Off West End for the best of the London Fringe Theatre productions and performers and, if the excited recipients are anything to go by, are highly coveted. While the affair may not have been as swish as the Oscars or the Oliviers there was a real sense of community discernible in the very large gathering; who knows, with a looming public health  issue such an event may not even be permissible very soon. I was pleased to note that I had seen at least some of the productions shortlisted during 2019; my personal favourite win was the double award for Bart Lambert and Jack Reitman as the protagonists in Thrill Me at the intimate Hope Theatre in Islington – very well deserved. If there can be said to be a big winner then it was last year’s production of Equus from the Theatre Royal at Stratford East which took awards for Best Lighting Design, Best Director and Best Production. By all accounts it was probably a worthy winner (alas, I didn’t see it) though I did find it odd that none of the recipients felt moved to namecheck the author, Peter Shaffer. If you want to see who and what else took home awards, then shortlists and winners are shown here.

Four productions, a book launch and an awards ceremony later I feel a bit more caught up with myself though I suspect the diary will soon be straining again; indeed, I know it will as I’m suddenly back in rehearsal. Local theatre group WP are mounting a production of Joe Orton’s Loot in a couple of weeks’ time and have unfortunately lost their Mr McLeavy. Having played the part before (though way back in 2012) I’ve been drafted in to help out. So, any spare minutes there have been are taken up with relearning lines I thought I could safely consign to the mental shredder. Here we go again (literally)!

2 thoughts on “My rather dramatic weekend”