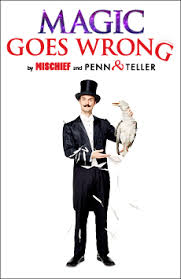 Last weekend I was at the Questors Theatre in Ealing for a book launch (Michael Coveney’s Questors, Jesters and Renegades – an account of amateur theatre in the UK) and I was tickled to discover that Michael Green had once been a member of the theatre group there. For those of you who have never heard of Michael Green, he wrote the “Bible” on theatrical mishaps, The Art of Coarse Acting. Green describes a coarse actor as “one who can remember his lines, but not the order in which they come; one who performs … amid lethal props”. Green developed a franchise out of his “Art of Coarse…..” books which also included guides to rugby, sailing, golf, drinking and even sex. In much the same way the Mischief Theatre company (who coincidentally gave their first significant performance at Questors) have made great capital out of variations on a theme. After four stage productions, a couple of TV specials and a whole TV series, the latest incarnation of their work is an ambitious show featuring conjuring, illusions and sleight of hand entitled Magic Goes Wrong.

Written in collaboration with top stage magicians Penn and Teller there are, in fact, a number of tricks which actually do work though these are heavily outweighed by those which do not, or seemingly do not. Bad presentation, bad timing and just bad luck all play a part in limiting the success of the supposed charity event for which this magic is being performed. The acts range from the tail suited old school magician Sophisticato (laden with parental issues), via shock magician Blade who ends up battered, bruised and one limb down, to irascible clairvoyant the Mind Mangler. The latter of these was, for me, the most successful turn of the evening. Henry Lewis’ characterisation caused gales of laughter as his props, the tampered with teleprompter and a particularly dense stooge planted in the audience systematically let him down. Admittedly the funniest aspect wasn’t so much the script as Lewis’ ad-libbed improvisations riffing off members of the audience. I’ve only ever seen someone do this so successfully once before and that was the great Edna Everage/Barry Humphries in her/his prime.

The weakest aspect, alas, was probably the female input with Bryony Corrigan and Nancy Zamit (as spangled duo Spitzmaus and Bär). Initially quite funny, the reliance on outrageous cod German accents soon became a bit wearing though I’m still trying to work out how Zamit got from inside the barrel of a canon into a box perched on the opposite side of the stage. I guess that’s where working with Penn and Teller has paid dividends – two illusionists who can really work the magic. A particularly awesome and gruesome finish to the first half had all the hallmarks of their input – top marks (and a strong stomach) to whoever on the special effects team put that together.

There are video cameos from Derren Brown and David Copperfield and some amusement to be had with a charity totaliser charting the paucity of supposed money being raised. What the piece lacks most of all perhaps is a strong narrative thread. The offstage lives of the performers are hinted at but never really developed. Neither are the onstage disasters particularly cumulative. One of the joys of the original Play That Goes Wrong was in watching the team trying to keep alive the narrative of the play within a play as disaster built on disaster. As the nature of this current piece is as a series of individual variety turns, we return to base camp each time and the build-up has to start all over again. True there are some running gags but in the end, this is not so much a play as an entertainment though still with all the expected errors, cock ups and pratfalls

Mischief Theatre have come in for some criticism that they are simply ploughing the same furrow all the time but surely that is part of their appeal. The expectation is that things will go disastrously wrong and, to our hilarity, they do – repeatedly. Their one previous stab at doing something different (Groan Ups) apparently didn’t really hit the mark and so who can blame them for finding a formula and sticking to it. The fact that they have been then able to franchise out their product right round the world means that success is theirs even without putting in an appearance in their own shows. It is a model very much based on that used by Canadian circus troupe Cirque du Soleil who have six shows playing in Las Vegas alone. The franchising leaves Mischief free to develop new work for their year’s residency at the Vaudeville Theatre and capitalise on their new found TV success. Although this latter was a little erratic in terms of quality, I felt the half hour format generally served them well. It didn’t overstretch the premise each time (unlike their two earlier Christmas specials which after a while just became repetitive). I’m sure we will continue to see much more of their work in the coming years – let’s just hope they can find enough variety within the format to sustain the joy in their work.

2 thoughts on “The “Goes Wrong” phenomenon”