For the second week in a row the National Theatre is streaming a classic novel in staged form. This time round it’s Robert Louis Stevenson’s tale of piracy and high seas adventure, Treasure Island as adapted by Bryony Lavery. But I’m not sure it is one that would particularly captivate its, presumed, young target audience. However, at least they won’t be counting up, as I did, the changes made to the original which were sometimes gratuitous.

The first big alteration which hits you straight away is that Jim Hawkins has become Jemima (though still referred to as Jim throughout). Treasure Island is, of course, notorious as a text for almost completely sidelining women but it is what it is, and I found myself contemplating why the change had been made rather than concentrating on the action. Dr Livesey  also turned out to be female but only the performer not the character and so did several of the pirates – sometimes as female actors playing female characters and sometimes as female actors playing male characters. Now while this shouldn’t matter (and generally I find it doesn’t) on this occasion it came across as somewhat muddled thinking. Mrs Hawkins had been turned into Grandmother Hawkins for no other reason that I could see than to provide some much needed light relief. 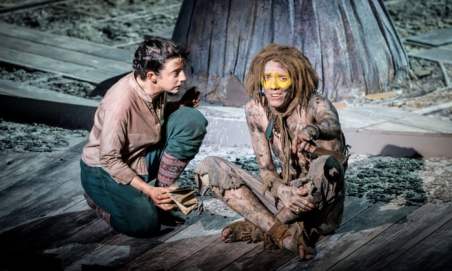 Ben Gunn was transformed from a wizened old man to a much younger mud splattered ex-cabin boy reminiscent of Poor Tom in King Lear. This change worked in that it made his quickly formed relationship with Jim far more credible. And then there’s Long John Silver. Forever fixed in many minds (well mine anyway) as Robert Newton in full on ham mode, this was a much subtler reading of a complex character and, truth be told, probably much nearer to Stevenson’s original concept of the character. 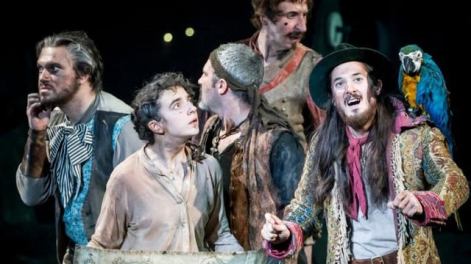 The play took its time getting going. Act 1 is full of some long-winded exposition about what has happened in the past and whose side everybody is on but that’s always been a fault with the original. However, there was some interesting characterisation going on especially from David Sterne as a foul  and brilliantly made up Blind Pew surely channelling Gloucester (Lear again) and from Nick Fletcher as Squire Trelawney who got the naïve bumptiousness of the character spot on. Patsy Ferran as Jim held the piece together well and despite my criticisms above gave a winning and spirited performance which provided a good deal of damage limitation. But, in the end it is all down to your Long John and although Arthur Darvill’s performance was subtly conceived, and particularly in the star gazing sequence there was evidence of real depth to the man, there was something missing. I just didn’t think he had enough charisma to lure Jim (and us) into his wily schemes and as for that kiss – really? Any leg problems were solved, after the initial, perhaps too swift, reveal by giving Darvill’s version a prosthetic – which, I couldn’t help feeling was rather cheating. And I really didn’t buy into the look that had been created for the character – unfortunately I kept expecting Long John to break into a chorus of “You Gotta Pick A Pocket Or Two” at any moment. Meanwhile, the parrot stole the show!

Though Polly Findlay’s production picks up in Act Two there is still too much talking and insufficient buckling of swashes. Where, for instance, was Israel Hands fight to the death with his fellow pirate? Indeed, most of the fight scenes were disappointingly bland. Maybe they had to be sanitised or removed altogether for the expected younger audience but, unfortunately, much of the power of the narrative was lost by doing so. I found the denouement muddled and muddling and the whole business with descending into the caves seemed to have been put in to show off the Olivier’s (in)famous drum revolve. Though if any element can be said to have brought the production to life it was the settings of Lizzie Clachan. In particular she provided a spectacular Hispaniola with rigging reaching the cavernous heights of the auditorium and a beehive of cabins which rose and descended throughout. The atmosphere created was made even stronger by the clever lighting design of Bruno Poet.

Treasure Island  is, undoubtedly, a difficult book to adapt for the stage and to me this production did not quite crack it. If you have nothing to do of an evening you could do worse than reread the novel – particularly if, as I have, you happen to have a copy with illustrations by the marvellous Mervyn Peake (see here for a post about him). On the day when the lockdown was extended for at least another three weeks, the play at all events did get us outside and off on a West Indian voyage for a while so, “for this relief, much thanks”.

A reviews of the NT’s previously streamed production One Man, Two Guvnors is here and of Jane Eyre here