London’s Vaults Festival was forced to close down early and the Edinburgh Festival has been cancelled outright. Never fear though, an enterprising website has sprung up offering an online equivalent. OFF (Online Fringe Festival) may not have the breadth of its non-virtual counterparts but the shows listed for this week all, in their own way, look interesting. Rather as you do at this sort of event I decided to cram in a few performances and so armed with the “festival brochure”, I planned my choices and made my way to the various locations (i.e. I watched one on my phone, one on my tablet and one on my laptop!)

First up was Blood Orange by writer/performer Tania Amsel. Now, I had already seen this particular show at the Old Red Lion in Islington just before Christmas but I hadn’t felt 100% on the night so I thought that I might appreciate it more this time round. Besides which, as I already knew, the piece partly dealt with the difficulties faced by the NHS and what could possibly be more topical than that? Amsel wrote the piece in response to the junior doctor’s strike – remember that? – when part of their grievance was chronic underfunding? And look how that turned out! But, politics aside, the character telling her story is Amy, a junior doctor, working long shifts in a Swansea hospital  and up against the odds. It is the run up to Christmas, A & E is manic, she is not going to get home for the festivities, is due to attend an important interview for a post at Great Ormond Street hospital and an embarrassing incident in her personal life have all left her tired and vulnerable . The appearance of Luke, a young patient, sets Amy’s mind racing about her own younger days and specifically about her sister Alice who had her own health problems. To say more would give away too much but, through scenes that take place in both the past and the present, Amy has to find a way towards some inner peace and resolve her difficulties. 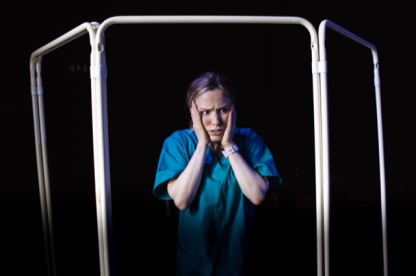 The monologue is very simply staged – the main prop being the frame of a hospital screen which can be wheeled into various configurations. Amsel’s performance is thoroughly engaging. Gradually as the story reveals its darker corners we are sucked into the narrative and it is a relief when resolution is found. It was a rather better piece than I remember and I am glad I got to see it again and revise my opinion. With the caring professions being so much on our minds at present it should almost be a compulsory watch.

My next choice was something completely different – Fulfilment created by the company SharkLegs. It’s a piece about Amazon and its fulfilment centres; the rather ridiculous name given to the storage warehouses where human figures acting like robots race around the premises acting as “pickers” of ordered goods to be sent out. SharkLegs has based some of this piece on interviews with Amazon employees (presumably now ex-employees) who tell grim tales of zero hours contracts, slave driving picking rates and having little time to visit the loo. Essentially this is informal verbatim theatre and the three cast members (Phoebe Hyder, Claire Parry and Ronan Cullen) give us some insight into these drone like figure who work simply to fulfil the orders of others.

The other interlinked and overlapping but distinct element is rather more whimsical and, I felt, rather more engaging. It concerns the creation and initial programming of Robox – an Amazon robot designed to monitor your every desire and make sure your wishes are fulfilled. This is done through interaction with the audience members – both generally and particular – and means the team are soon ferreting out facts and the preferences of the spectators in much the same way as Amazon’s algorithms do every time we use their services. Robox is quaintly constructed from cardboard but the three strong cast – now acting as puppeteers – make it an entirely credible entity and matters are all the more sinister for it. Think HAL in Kubrick’s 2001: A Space Odyssey. My main concern with the piece is that the two halves sit uneasily together and do not really gel and I think the team would have been well advised to fully develop either one idea or the other – clever concept though it undoubtedly is. In this lockdown Amazon is now apparently raking in $11,000 per second – Fulfilment shows us why we should be wary.

My final choice was The Delight of Dogs and The Problems of People by Rosalind Blessed who also performs alongside Duncan Wilkins. Despite the romcom feel of the title, the pair show us a relationship in freefall. It all begins calmly enough with James preparing dinner for his wife of five years, Robin. He seems like the ideal partner but then time shifts and we gradually learn that he actually should not even be in the house, for the couple are estranged and she, even if not he, has moved on. We see scenes from their past life suggesting they were once happy but the death of one of their pets seems to provide some sort of turning point.

Interspersing monologues and duologues, the actors are completely believable in their roles – particularly Wilkins who is even credible as a dog. Staging is straightforward with locations suggested rather than represented; the dogs are largely an offstage presence. As the couple’s relationship starts to fail the writing becomes spikier and the drama more intense. The last fifteen minutes of the play dealing with the topic of abuse (another prominent concern in these lockdown times) are harrowing but very well done. However, I could have done with some editing of earlier material to get us to this point rather more quickly….or maybe my long day at the Festival was beginning to tell.

While clearly not replicating some aspects of Fringe Festival going – no dashing across town or hurried snacking in this version – this is as near as we’re going to get until lockdown lifts. All three productions I saw have relevance to our current situation and it is good to see serious topics being treated in innovative ways. OFF provides an upbeat welcome experience in the face of adversity and a much needed platform for fringe performers and writers to continue demonstrating their capabilities. As Festival founder Aydan Wilder has said “Our entire goal at the Online Fringe Festival is to bring you good, thoughtful entertainment directly to your homes. Please support us and our Artists in this endeavour!” Hear, hear!

OFF (click here) was launched by director and filmmaker Aydan Wilder and Vibes Art Studios just a couple of weeks ago. It aims to help new and emerging theatre artists reach audiences during these difficult times by streaming shows on a rotational basis. Shows are free to view but donations are encouraged.