I was OFF again. To clarify that’s the Online Fringe Festival which I had enjoyed on my previous all day visit. I took in just one show this time round; here’s the review

Dudley Moore isn’t happy; Peter Cook’s none too pleased  either. Both have just been reunited in comedy limbo awaiting their final processing before spending eternity in comedy heaven or comedy hell. Peter’s had to kick his heels for seven years waiting for his partner to turn up – apparently double acts have to be processed as one unit. Dudley’s put out because his death has coincided with the Queen Mother’s and she’s getting all the attention. If this seems like the premise for a daft Not Only But Also sketch you’re probably right but this particular flight of fancy has been turned into a full length play Goodbye: The (After) Life Of Cook And Moore by Jonathan Hansler and Clive Greenwood.

Cook and Moore soon find themselves reliving snippets of their past as they slip in and out of their Pete and Dud characters as well as the notorious and infinitely more scatological Derek and Clive. Old tensions are brought to the surface and disgruntlements are aired as they wait for their processing ticket number (666 naturally) to be called. St Peter (well Peter Sellers) turns up to offer advice to the bickering duo who are only too keen to air each others’ shortcomings – Cook’s alcoholism, Moore’s sexual proclivities. In the second half we find out the result of their interview but I won’t spoil the outcome by revealing where the pair end up.

The impersonations, while not spot on, are good enough approximations. Hansler has some physical resemblance to Peter Cook and plays him with a recognisable laid-back insouciance that became the legendary comedian’s trademark. Kev Orkian goes for cuddly Dudley and mostly succeeds – he certainly nails the piano playing though this is introduced disappointingly late in proceedings. Hansler and Orkian are also successful in recreating the banter of the duo’s alter egos in dialogue that eerily echoes some of their famous routines. There even seemed to be instances of Dudley’s corpsing; I couldn’t decide whether this was genuine or scripted.

Everybody else is portrayed by Greenwood; everybody else being a mixture of other dead comedians and God who turns out to be….but no spoilers. Greenwood is a good mimic and I particularly enjoyed his recreations of Sellers/Clouseau and Rossiter/Rigsby; indeed, the latter characterisation deserves a play of its own. That said, I did begin to feel that these appearances were being thrown in because Greenwood could “do” them rather than advancing the main plot in any meaningful way. Delightful all the same.

The play has been has been shot on two cameras and is broadcast “on two screens  to give the impression of a Big Brother like afterlife where the cameras of the CBB, (Celestial Broadcasting Board) are always watching you”. Fair enough but that wasn’t really readily apparent until I read that explanation. However, it is a clever enough device which reinforces the notion of duality which runs through the play and with Zoom becoming so prevalent we’ve all got used to the idea of small boxes on the screen. It also shows the influence of renowned film maker Vadim Jean who directed the play. 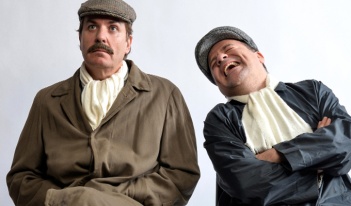 As a tribute to the spirit of one of the greatest comedy duos ever this anarchic piece was a pleasure to see and is definitely a feather in the cap for OFF. However, I felt the piece rather lacked focus in the second half and completely lost its way towards the end. Rather than finish with the expected song that was their trademark it just fizzled out on a weak joke. Sometimes Cook and Moore’s sketches petered out (apologies for the bad pun) rather than ended so perhaps this was a subtle homage rather than a lack of ideas. Maybe, then, I should just do the same……

Goodbye: The (After) Life Of Cook And Moore is periodically available as part of OFF (Online Fringe Festival). Click here

One thought on “Goodbye: The (After) Life Of Cook And Moore (Online review)”