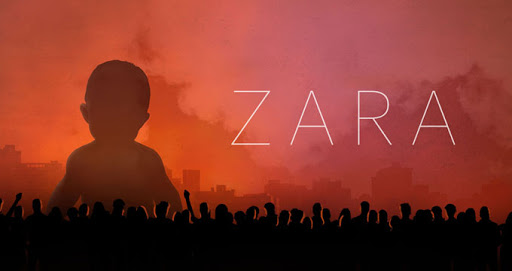 If Zara is anything to go by, Mind The Gap is clearly a theatre company which doesn’t do things by halves. A true piece of event theatre, it is the final part of their Daughters Of Fortune trilogy which examines the subject of learning disabled parenthood. Though the other two elements are rather more low key, this piece has an epic scale and visually is truly memorable even as a home streamed video.

Zara is heavily pregnant, is estranged from her own mother and her baby’s father and feels hemmed in and harassed by social services – the very system which is supposed to help her through her difficult time. However, she is soon visited by “the system” after the birth and it becomes clear they are going to place the baby in care. Not unnaturally Zara refuses to co-operate and a crowd of protestors join her in support. Battle lines are literally joined when the army is eventually called in and tanks (yes, tanks) roll in to join the action.

The last part isn’t very likely, I know, but somehow it fitted the scale of the production where emotions were also of epic proportions. Forcibly ramming home the message that baby Eva is a gigantic problem for society,  this character appears in the guise of a huge puppet operated by no less than eleven puppeteers dressed as midwives. The advertising blurb states that Eva is bigger than a double decker bus – she is easily that. Gigantic props – a dummy,  a bottle and a quilt – make their way through the audience to placate the very loud infant and there’s an army of biohazard suited cleaners to clean up what babies do naturally to the accompaniment of a song about Poomageddon. There’s a projected light show (thrilling), filmed testimony from people who have found themselves in Zara’s shoes (moving), a community choir, a wheelchair dance team – the video credits at the end were just stuffed with names; hats off to director Joyce Lee for co-ordinating such a mammoth event. The whole is framed as a rolling news programme and there are some pleasing skits on “forthcoming programmes” to kick off the show. 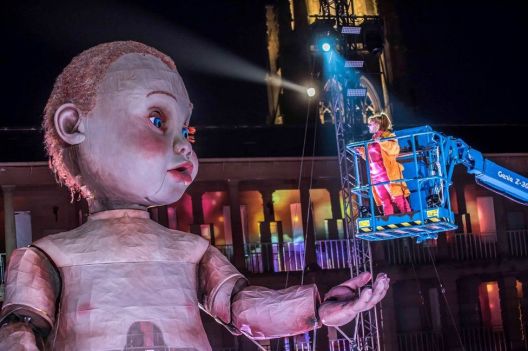 It’s not all about the big event though. At the heart is a personal tale of potential tragedy showing the effect all this has on the unfortunate Zara. JoAnne Harries plays the young mother as a victim of circumstances but with a fighting spirt which gets the audience on her side. She spends much of the action in a cherry picker (oh, didn’t I mention those?) which takes her up to the level of the baby’s face and which ensures the audience can see what’s happening. At one point she even does some spectacular aerial ballet work. Zara’s main adversary is known as the Assessor (Alison Colborne), a clearly bureaucratic pen pusher who advises fostering and kick starts the battle. Liam Bairstow acts as a quasi-narrator during the scene breaks, interviewing members of the audience and keeping the whole thing flowing.

Mind The Gap is a world renowned learning disability theatre company and it is thrilling to see them spearheading such a remarkable show. They have partnered with outdoor events companies Walk The Plank and Emergency Exit Arts to provide a high quality “experience” rather than just another play which bemoans the fate of the less fortunate  – a so much more life enhancing and effective way to raise such an issue. You’ll be thrilled and you’ll be moved; definitely recommended.

Zara is available on You Tube until May 11th. Click here