A couple of weeks ago I was pointing out that the National Theatre At Home offerings so far had nearly all been of Shakespeare or adaptations of classic novels and called on them to branch out a bit. They have certainly done so with the latest stream of Barbershop Chronicles by Inua Ellams. Unlike previous weeks this was never originally shown as part of the NT Live project broadcast to cinemas but is, rather, an “enhanced archive recording”. Presumably it was never meant to be seen by the public and there are moments when there seemed to be some picture quality issues (unless that was my broadband – difficult to tell) 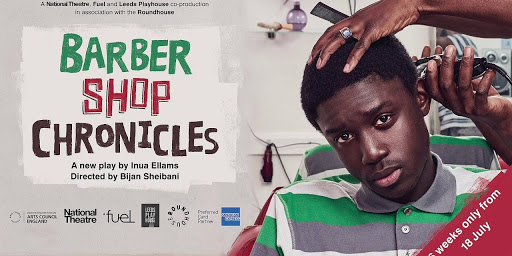 Barbershop Chronicles exploded into the National’s repertoire in late 2017 and garnered universally good reviews for its writing, direction and energetic cast. The action is all set on one day, mostly centrally in a Peckham salon but we also transported to five other locations on the African continent drawing parallels between them. It soon becomes clear that in African culture a barbershop is more than just a place to get unruly locks tamed. It is a central part of the community where men (and this is an all male cast) go to talk about local, national and international politics, watch/listen to football and share experiences about themselves. As one character points out they are the equivalent of a British pub without the alcohol. 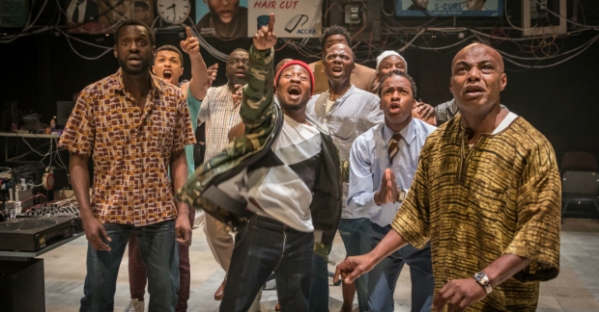 In the central Peckham salon there is tension between Emmanuel the barbershop’s current owner and Samuel, the son of the previous proprietor who feels that he should have taken over the business and has been passed over. This sets up a central theme about fathers and sons which spills over into the situations in the other shops and we come to understand the cultural pressures that exist to be a “strong, black man”. This does not only revolve around physical strength but also encompasses discussions about employment, the power of language, sex and attitudes to women, parenting and absentee fathers and so on. There is much talk about physical abuse in the home (not that some of the characters regard it as such) and it is evident that a trip to the barber is a chance to vent with the chairs becoming, to all intents and purposes, psychiatrists’ couches. 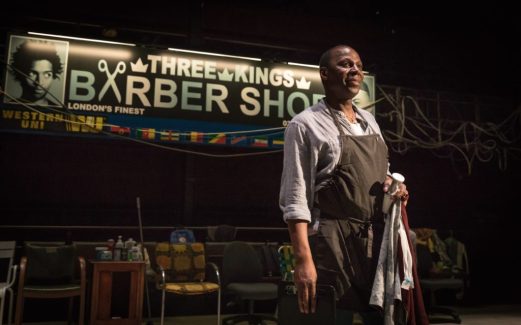 The show itself has a hybrid structure which, at times, lends it the air of a sketch show – it is just that all the sketches are set in similar locations. Ellams’ script veers from the farcical to the tragic and, I felt, lost a bit of focus in the second half as the various stories began to be tied up. One element that certainly remained with me afterwards was the tragic sequence in which a Johannesburg man describes how, because he was so poor following paternal abandonment, he used to charge the white boys to be allowed to call him “kaffir”, a highly offensive Afrikaans term, and this is paralleled by much talk of the “n” word in the Peckham shop. The central story of wounded Samuel and kindly Emmanuel – a very good Fisayo Akinade and an even better Cyril Nri respectively – is brought to a satisfactory conclusion and there is a clear sense that the social function of the barbershop will continue to play a key part in these various (yet clearly linked) cultures across the globe.

I did find the constant shifting between locations a bit disorienting at first but, as we returned to some of them, the stories that were developing were allowed to play out. Perhaps it’s not for me to say but I did wonder if, because of the need to fast track some of the characters, there wasn’t some stereotyping going on and whether the piece didn’t do some reinforcing of negative images of the cultures it was trying to display positively. If I didn’t feel as enthusiastic about the play as the majority of its initial reviewers maybe that says more about my current state of mind than anything to do with the performance. What can’t be denied, however, is the cast’s undoubted energy and attack – a livelier show is hard to imagine. One of the most enjoyable elements was the various scene changes beautifully choreographed by director Bijan Sheibani and movement director Aline David with formation dance routines, twirling chairs, snapping hairdressers’ coveralls, clicking scissors and evocative chanting. Maybe, right now, I just need something escapist to watch rather than listen to and concentrate on, which is why this element came over so well. 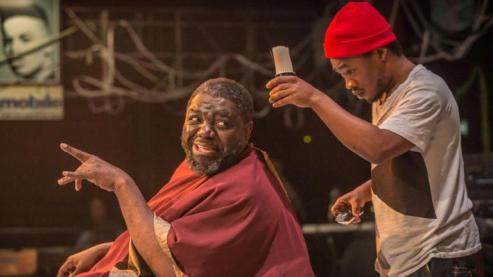 So, was this all a wicked joke by the programme schedulers for the National Theatre At Home strand? At a time when we’re all suffering from lockdown hair and on the day when reports reached us of people queuing at midnight in New Zealand as hairdressers reopened  it was a pertinent moment to allow this production into our homes. It was also a timely reminder how, for many of us, our trip to the hairdresser is a chance to put the world to rights – just don’t ask me where I’m going for my holidays!

Barbershop Chronicles is available on NT At Home’s You Tube channel until May 21st . Click here