In Shakespeare’s day the audience would refer to going to “hear a play” rather than see it. Complicité’s streamed production The Encounter seems to be trying to resurrect that notion. It places sound firmly front and centre (literally) to create an assault on the ears the like of which I can guarantee you will have never experienced before. If you’re not sure what the term “immersive theatre” means, then begin here.

It is perhaps unusual to start a review by referencing the sound designers but in this instance it is fully justified; Gareth Fry and Pete Malkin’s soundscape is nothing short of a triumph and, even should you find nothing to engross you about the storyline, it is worth watching this piece just for the aural experience alone. Headphone wearing is absolutely essential though, being a collective experience, it must have been odd to sit in a theatre completely isolated from everybody else; in fact, this production may well work better in the home environment. The opening sequence when the intricacies of the system are explained is  delightful. It put me in mind of albums that could be purchased in the late Sixties, often called something like This Is Stereo (or Quadrophonic), which introduced listeners to a brave new world of sound. This is intelligent referencing as the main narrative takes place in 1969. It is also clever on another level as solo performer Simon McBurney puts us through our paces making us think that the show proper has yet to begin, when in fact it already has.

McBurney’s performance is the second extraordinary thing about this production. Starting as a narrator, he also assumes the character of the protagonist, American photojournalist Loren McIntyre, who set out to capture a record of the “lost” people of the Mayoruna in a remote area of Brazil. He holds the stage for two hours in a punishing routine which sees him whirling around the vast Barbican stage becoming increasingly frenzied, almost demonic. His voice is instantly recorded, replicated and looped to create the background soundwash over which he narrates the main story. Extensive use is made of Foley techniques as he tramples unspooled video tape to replicate footsteps and sloshes bottles of water to suggest the lap of the river water. At one point a rustling crisp packet leads to a sequence in which a crackling fire rips through the Mayoruna encampment. McBurney is therefore not only writer, director, narrator and actor but also sound technician, composer and conductor orchestrating the increasingly frantic and nightmarish soundtrack – I felt exhausted just watching him.

All this is played out on the expanse of the Barbican stage backed by a representation of a sound engineer’s baffle board on which the stunning light projections of Paul Anderson and Will Duke play. The main stage is largely bare apart from litres and litres of bottled water both necessary to keep McBurney hydrated and provide the raw material for sound effects –  and perhaps to be suggestive of the river around which much of the action takes place. There is a binaural “head” on a pole used for demonstration purposes at the start and which becomes an all seeing (all knowing?) totem in the main action. And, apart from the sound equipment, that’s more or less it. Somehow though that is more than sufficient. The main scene setting comes from the detailed and crisp soundscape which fills your head with the sounds of nature and sorely tempts you to close your eyes and immerse yourself further in this alien world. 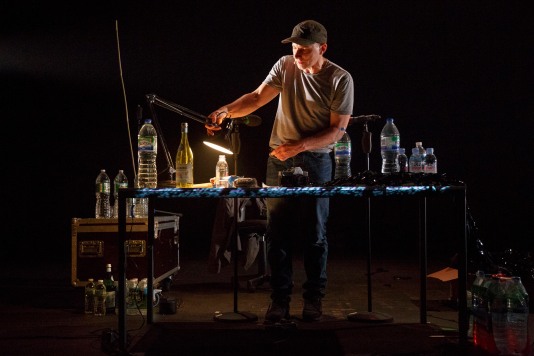 Gradually the seemingly disparate strands coalesce to form a unified hole as some big themes emerge. The power of narrative, relationships, our collective consciousness, the nature of time and the nature of nature are just are few of the big questions which are wrestled with. Such is the character of the piece that there are seldom any answers provided but breath can be drawn in the charming interludes where McBurney’s daughter (voice over) interrupts Daddy because she wants to hear just “one more story”.  Here is another piece of narrative as she is frozen in time as a young child asking those sorts of disarming questions that only children ask – “Who are you talking to?” Who indeed? McBurney reads to her and, by extension, us a passage from Amazon Beaming by Petru Popescu, the book that fired the performer’s imagination sufficiently to construct the piece in the first place – and thus we have multiple layers of narrative all inside one another like Russian matrushka dolls.

Over and above that, though, McIntyre’s is a compelling story about an individual’s fight to survive in a hostile environment and it is this which propels the piece towards its finale of a drug induced nightmarish frenzy. At the very end of the performance, Simon McBurney steps forward to acknowledge his two sound operators, Ella Whalstrom and Helen Skiera. While this would generally be regarded as rather unusual, in this case it is not only justified it is absolutely fundamental. They have, in essence, acted as indispensable intermediaries between actor and audience and without their timing and expertise there would be no show. It’s grand to see the techies getting some recognition.

I’ve watched a number of one person shows/monologues since these lockdown reviews started six weeks ago and this is undoubtedly the best so far. The Encounter is compelling, utterly different and despite its length extremely rewarding. So, visit the loo before you start – because once immersed you won’t want any interruptions.

7 thoughts on “The Encounter (Online review)”