The BBC’s Culture In Quarantine project is composed of several strands and one of these is Performance Live. It is an eclectic selection of arts based programmes ranging across dance, comedy, poetry and so on. I decided to investigate a couple which appeared to have the most connection to theatre, The Way Out and Love. 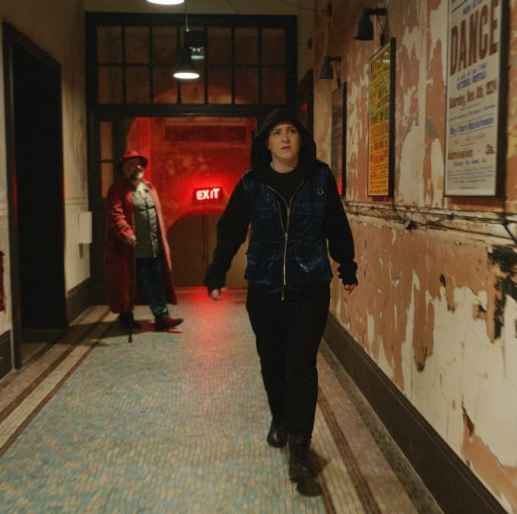 The last few years has seen a dramatic rise in site specific and/or immersive theatre with seemingly no space off limits. Pioneered by groups like Punchdrunk, the genre incorporates anything and everything and seemingly the more bizarre the better. This seemed to be the idea behind The Way Out in which The Young Person stumbles into a building out of the rain and is shown round by The Guide until finding, well, the way out. The venue is the distressed corridors, staircases, rooms and spaces of Battersea Arts Centre. Really this thin premise is there just to show a succession of acts singing, dancing, speaking poetry and doing strange things with a bunch of hula hoops. The most well-known of these, in theatrical circles anyway, are wild child performance artist Lucy McCormick and singer Le Gateau Chocolat. 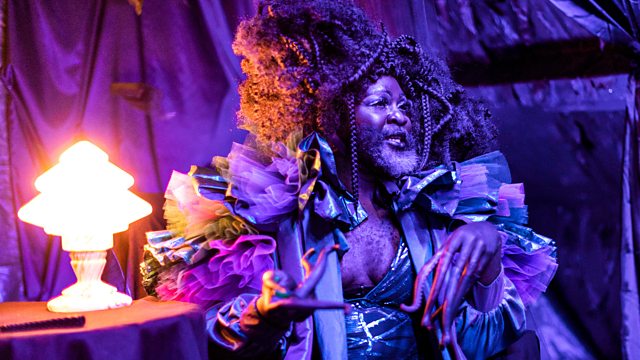 The Guide is played by comedian/actor Omid Djalili (also credited as co-writer with Nicholas Mark Harding). He wears a dapper costume and swishes a cane making gnomic utterance along the lines of “here’s a door, it’s up to you whether you go through it or not” and this said in suitably sombre tones designed to make us all think about the path of life we are on. I couldn’t decide whether Djalili was being serious or sending the whole thing up. As The Young Person, Bláithín MacGabhann has precious little to do other than register annoyance at not being able to get out of the building or interest in the performers that are the whole point of the show. 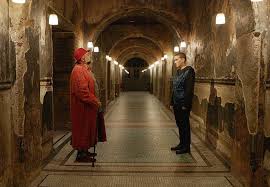 The venue provides a suitable backdrop and the whole thing has an “Alice In Wonderland as filmed by Jonathan Miller” feel to it – indeed there is a direct passage quoted from the book at one point. Technically it is cleverly done as it is has been filmed with one continuous 42 minute take. However, as a piece of immersive theatre it simply doesn’t work because, of course we are not and cannot be there for it to be immersive. It’s a diverting enough 45 minutes but ultimately it fails to do what it says on the tin. 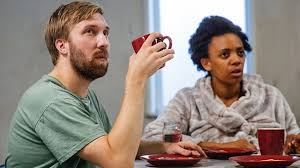 The second choice, Love written and directed by Alexander Zeldin, was somewhat more conventional. Indeed, as an introduction by Lesley Manville informed us the play was originally devised for the Dorfman Stage at the National Theatre. It’s a harrowing tale of the residents of a temporary accommodation in the run up to Christmas. New arrivals Dean and Emma already have two children and a third is imminent. They have been evicted and think that their hostel stay will only be for a brief while. Yet they have reckoned without a  bureaucracy that will dash hopes at every turn. Longer term residents Colin and his elderly mother Barbara also still retain hope but perhaps have even less reason to do so. The main action, such as it is, centres on the two families; brief scenes featuring other refugee residents seem to be there to provide some context rather than advance the storyline. 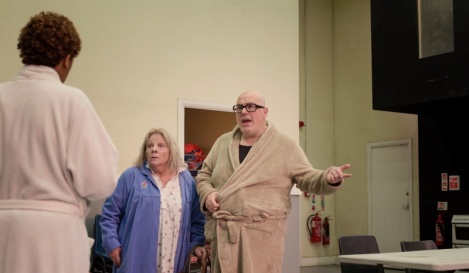 The acting is generally quiet and understated and we are shown rather than told the effect all this is having on the individuals and the family unit. Anna Calder Marshall and Nick Holder are excellent as the mother and son; she bemused and doubly incontinent, he struggling with anger management issues and a bit too ready to invade another’s personal space (how times change). However, the actors amply demonstrate the love that binds the pair together even though they clearly rub each other up the wrong way. Holder’s supressed anger fights with despair as he relates how he is kept waiting five hours for an interview with a housing officer who spends five minutes on their case and then declares that there is nothing can be done for them. In a parallel situation Dean is faced with the dilemma of either getting his daughter to school or attending a benefits interview with only forty minutes’ notice. Luke Clarke invests Dean with a growing sense of despair but still trying to hold it together for the sake of his partner and their children. Janet Etuk as Emma portrays someone who is right on the edge of coping and with childbirth looming, we fear for her mental health. 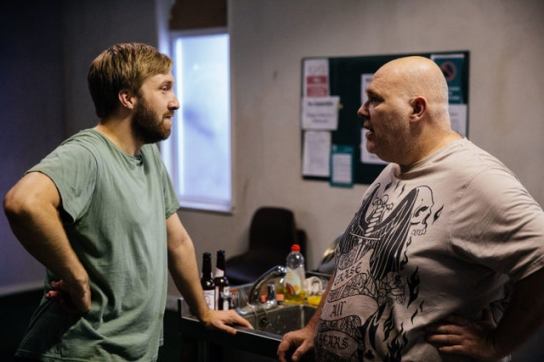 The obvious points of comparison here are the films of Ken Loach and Love is imbued with the same sense of social injustice which should make the audience rage against the machine. It really made me wonder how people in this sort of situation can be coping with the current crisis and all its attendant restrictions. From that point of view alone, this is an important watch.

The Way Out and Love are available via Performance Live on the BBC iPlayer. Click here