In a You Gov poll of 2016, the Shakespeare play with which respondents said they were most familiar was Romeo and Juliet. Given the number of productions there have been plus at least two famous film versions from Zeffirelli and Luhrmann and its reincarnation as West Side Story, this is hardly surprising. It is also ubiquitous on the school curriculum. The challenge nowadays is not only in keeping it relevant but also in finding something new to say.

The Royal Shakespeare Company’s latest version from 2018 adopts an approach based on the assessment of Harley Granville Barker that the play is “a tragedy of youth, as youth sees it”. Thus, there are no star names and the modern day (lack of) attention span is forefront in the approach taken by RSC Deputy Artistic director Erica Whyman; this gives the series of rolling tragedies a sense of inevitability. Of course, the play cannot go full on modern; the misunderstandings which occur towards the end would otherwise be solved by a simple text message. Instead, we seem to be in some sort of alternative world which looks and feels a bit like ours, but which isn’t. It is a world in which carrying knives seems to be par for the course, there are tensions on the streets and where the apothecary becomes a raddled drug dealer. It is certainly a multi-cultural, and, indeed, multi-accented production although there are, thankfully, no cheap divisions along those lines to form the two warring families.

Any production stands or falls on its central casting and Bally Gill and Karen Fishwick as the eponymous couple do a reasonably good job though I couldn’t detect much of a spark between them which somewhat undermines the idea that they instantly fall in love. Gill pretty much gets the fine balance between the bravado and insecurity of the young Romeo and the flash point over Mercutio’s death is particularly well done. Fishwick brings a steely determination to her role but, as I always do, I find myself wondering why Juliet simply doesn’t run away with Romeo when she has the opportunity. The modernisation in this production means that becomes an even more obvious, yet strangely unconsidered, way out of the difficulty. 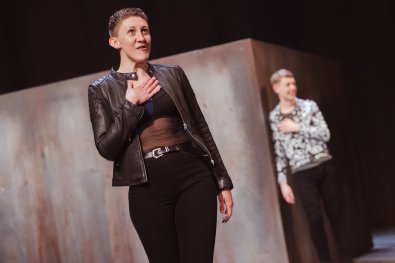 When the production was first put on there were many eyebrows raised over the regendering of Mercutio. Charlotte Josephine captures the swagger and cynicism of the character who proves to be a fighter rather than a lover and this radical recasting certainly gives the production an edge. However, I was left wondering whether it actually undercuts the notion of masculine toxicity which Shakespeare highlights in the play. Beth Cordingly’s portrayal of Escalus probably works better as a politician fighting to keep control. Along more traditional lines are Raphael Sowole’s brooding, menacing Tybalt and Josh Finan’s upbeat Benvolio. Both characters become obsessed with Romeo but, in this production, for clearly different reasons. Having highlighted this as a youthful production I’m afraid to say I found the most successful characterisations are among the older cast members. The Nurse can be a totally tiresome turn but Ishia Bennison gives her heart and makes the most of the comic opportunities afforded by the role. Andrew French has  presence as Friar Laurence and, more importantly, seems to be one of the few performers with a really good grasp of the verse speaking.

The design (Tom Piper) I found somewhat prosaic with attention focused on a large revolving cube which did service as various locations. While it added height for some of the key scenes (e.g. the tomb and Juliet’s bedroom) it was otherwise pretty nondescript; that said it did seem to suit the overall mood of the production which, at least to some extent, means it was a success. It was helped significantly by Charles Balfour’s moody and atmospheric lighting which lent extra tension to the unfolding tragedy. It was particularly effective in the closing moments when the ghosts of the dead characters appear.

One of the supposed televisual highlights of the lockdown has been the BBC’s Normal People – though, truth to tell, it didn’t do much for me. I thought the overall aesthetic of this production and that programme seemed to be targeting the same demographic. Perhaps I’m just too old to fully appreciate either but I’m glad that others can. It is great that the RSC has been so willing to share some of its most recent productions with the public at large and, having already seen Much Ado About Nothing (click here) I can attest that this takes a rather more traditional approach. Fortunately, with Shakespeare, there is always room for both.

Romeo and Juliet is available via the BBC iPlayer for two months. Click here

It is part of the BBC’s Culture In Quarantine strand which features five other recent RSC productions. Click here