The Original Theatre Company were in the middle of a tour of The Croft by Ali Milles when the virus struck but a hastily filmed version of the play has been available online for some time now. Set in a remote region of the west Highlands of Scotland it examines the lives of several women both in the present and the past and how society regards and treats them – in all cases, not well.

Laura and Suzanne are in a relationship and have fled from Home Counties comfort to the rough and ready charms of remote Coilieghillie; however, the pair’s past lives haunt them. Suzanne has left her husband and two teenage sons behind but can’t quite reconcile to the fact that she has done so and spends her time fretting about them, much to Laura’s dismay. Meanwhile Laura is troubled by memories of her parents with whom she had unresolved issues particularly Ruth, her mother, who had cancer. Further back in time we also come to learn about the life of Enid an actual ghost which still inhabits the croft after the local villagers turned against her with accusations of witchcraft. Parallels, prefigurings and intimations of doom run through the play and the various characters are shown to be spiritually linked across the different time lines portrayed.

Most of the actors double their roles to further enhance this paralleling. Caroline Harker plays both Suzanne and Ruth and by doing so suggests that her new and rather younger partner, Laura,  is desperately searching for a mother figure. Lucy Doyle as Laura also doubles as Eilene from the nineteenth century, the pregnant daughter of the local landowner who is taken in by the despised Enid. The two male members of the cast, Drew Cain and Simon Roberts also play four characters between them. Frankly, this is all a bit muddling although the actors do a reasonable job of differentiating between the various characters, sometimes transforming in full view of the (actually non-existent) audience. The only actor to remain in one role is Gwen Taylor as Enid and it is certainly her image that is being used to pull in the punters. But her character is sadly underwritten giving this fine actress far too little to do, especially in the first half, and failing to explain the ghost’s apparently malignant motivation to the modern day inhabitants, especially the women. 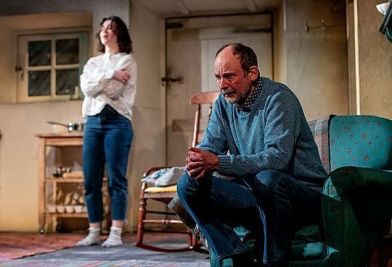 As a first play Milles has done a reasonable job of the writing and construction although I found the last section particularly baffling, overblown and melodramatic. Although this suits the tone of the nineteenth century storyline (the shamed woman becoming a society outcast) it really doesn’t work for the more modern sections. The fact that this is going to be a spooky mystery is far too heavily telegraphed with the remote location and the fact that (surprise surprise) there is no phone signal. There is also some clunky exposition about the various relationships from both Laura and Suzanne’s pasts as the local ghillie is got up to speed by way of being a conduit to the audience. I found myself smiling a little grimly when a hidden letter from the past turned up behind one of the picture frames. The ghostly effects, when they come, are nothing spectacular relying on lighting changes, jarring sounds, wisps of mist/smoke swirling around and the front door flying open and shut. At one stage Enid’s face gets covered in blood but as there is a natural explanation for this, the moment has little effect. 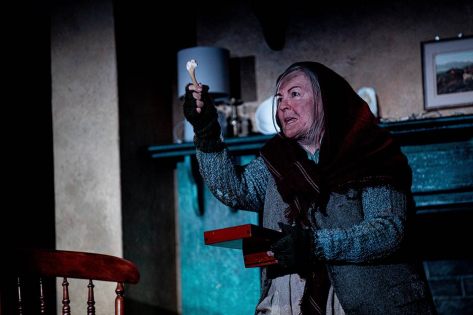 The design team of Adrian Linford, Chris Davey (lighting) and Max Pappenheim (sound) serve the play well creating a believable location and, as and when required, a spooky atmosphere. Director Philip Franks does what he can to ratchet up the tension but it all becomes a bit obvious what is going to happen and the piece, somewhat ironically given the subject matter, seems rather a throwback to a previous era. There are too many well-worn tropes from the standard ghost play though this is not so much haunted house as haunted hovel. While I can see that a touring production of this show would have done quite well in local theatres, I’m not so sure that it stands up to the closer scrutiny afforded by a television screen in one’s own home. The piece left me neither moved or particularly interested and if it was meant to keep me on the edge of my seat, I’m afraid it didn’t.

The Croft is available via the Original Theatre Company’s website (it comes as part of a package alongside their production of Alan Bennett’s The Habit Of Art) until the end of June. Click here

One thought on “The Croft (Online review)”