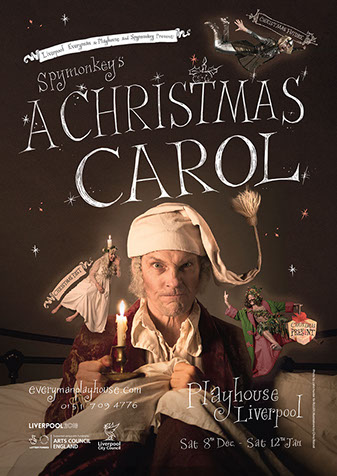 It is totally within the perversely anarchic spirit of Spymonkey that they have released their 2018/19 Christmas show as a freestream in the middle of June. Rather as with Moby Dick a couple of weeks ago they tackle another giant of literature by adapting Charles Dickens’ perennial favourite A Christmas Carol. Of course, they subject this to their usual brand of mayhem all of which is carried out with a four strong cast, three excellent musicians, what must be a very capable stage management team and a whole range of hats.

Toby Park takes the central role of Ebeneezer Scrooge and makes a pretty solid job of it; beneath the madness he shows the character’s real repentance for his past crimes against his fellow humans. Park also plays Mrs Cratchit – at least up to the point where the two characters finally meet. Sophie Russell takes on Bob Cratchit who in turns works a rather strange puppet Tiny Tim who seems to be having an identity conflict with Orville the Duck. Russell’s other main roles are Belle, Scrooge’s left leaning Marxist quoting girlfriend and the Ghost of Christmas Yet To Come who bases its “life” on motivational podcasts. The rest of the characters are carved up pretty equally between Petra Massey and Aitor Basuri who, among others, each play one of the other two ghosts, nephew Fred (Massey) and a strange hybrid puppet Jacob Marley (Basuri). They double (treble?) furiously as the entire brood of  Cratchit children – even when they appear on stage all at the same time. Basuri additionally takes on Dickens himself although he seems to have confused him somewhat with a stage conjuror/hypnotist (David Copperfield??). Oh, and he’s also the Christmas turkey!

Expecting the adaptation to veer wildly away from the original once it got started, I was somewhat surprised that it is as faithful as it is. A lot of the words are lifted straight from Dickens’s narrative and interestingly include some of the lesser known scenes which never usually make the cut with visits to a Welsh coalmine and a remote Scottish lighthouse; not that Dickens would recognise the ensuing sketches as anything he had written. There’s a deep respect then for the well-loved tale but also a deep irreverence as Spymonkey put their usual twist on things. Over and above the original storyline we are also treated to an award ceremony for best ghost, a scene in a Cuban nightclub owned by drug lord Mr Fezziwig, Massey performing a pastiche of Torvill and Dean’s Bolero routine (accompanied by a Henry the Hoover) and the cast and a choir performing that evergreen Christmas classic “No Alarms” by Radiohead – and that’s just in the first half. The level of invention is staggeringly high. 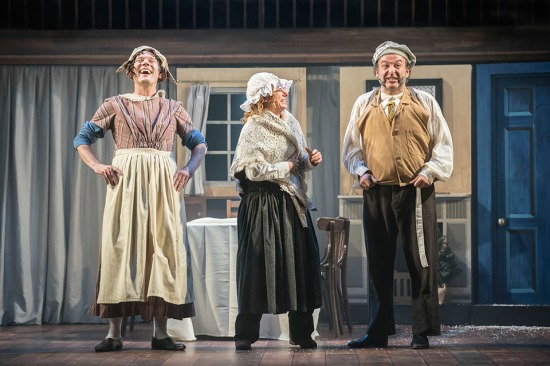 This being a Christmas show there are plenty of other musical numbers to flesh out the action with a musically adept trio providing the accompaniment. Designer Alice Power adds another level of fun with her inventive designs and Ed Gaughan puts some sense of structure and control into the madness from the director’s chair. This version of A Christmas Carol may not be a panto but certainly borrows elements of that genre to provide something entertainingly inventive. It’s quite a challenge to take something that is so well known and even revered and mint something fresh out of it but that is what Spymonkey have done. Even on a warm evening approaching midsummer this crazy crazy cracker of a show is more than enough to put you in the festive mood.

A Christmas Carol is available via the Spymonkey website. Click here for freestream (1 week only) or go to Vimeo OnDemand

One thought on “A Christmas Carol (Online review)”