About halfway through this version of Macbeth I was trying to calculate how many times I’ve seen this play. I suspect that’s not a particularly creditable admission to make when I should have been watching the action but the answer to the question is basically lots. It seems amazing to think that even after however many versions it is, that there are still new things to say or, at least new ways of saying them, that reveal facets that have so far lain undiscovered.

Polly Findlay’s version for the Royal Shakespeare Company comes from 2018 and sets a cracking pace right from the start. It stars Christopher Ecclestone and Niamh Cusack as the power-hungry couple but the action is seen almost entirely through the eyes of the Porter who graduates from the one darkly comic scene of the original to being a constant observer and commentator on what is happening. In this production he even gets a name; I won’t spoil the moment by revealing that here but if you know the play well enough then I’m sure you will guess. Michael Hodgson seizes his moments and makes them memorable especially as he literally chalks up the numbers of the dying on a wall. 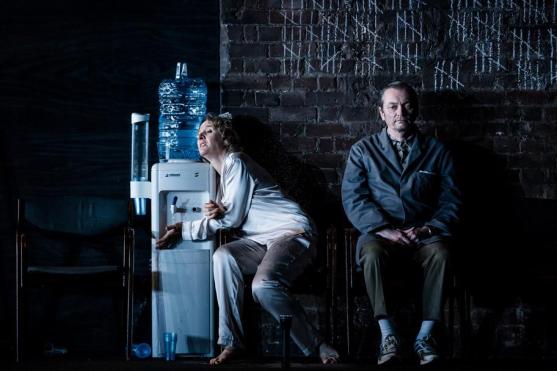 Nor is this the only numerical feature that counts (sorry). For above the stage is a large digital clock display that counts down relentlessly from the moment Duncan is dispatched until the second that Macbeth reaches his grisly end. Obviously introduced to ratchet up tension it succeeds, but possibly  not for the right reasons. I found myself ignoring the ebbing of Macbeth’s life and wondering whether the actors found it hard to time the action in order to meet the imposed deadline…. And what happened if they didn’t? I suspect there is some nifty stage managerial/technical footwork involved in seeing that this doesn’t happen. I did notice that, unless they had a 25 minute interval, the clock had jumped forward for the start of the second half.

The third directorial decision of questionable note is the casting of three young children as the witches. They manipulated dolls as they spoke and were used to shift the furniture quite a lot which seemed to me to indicate that human fate was similarly being organised. By extension, this means that Macbeth is not operating as a matter of free will but travelling along a pre-ordained path and I’m afraid that, valid as it is, I just don’t buy it. There was an Omen like eeriness to the young girls and although I didn’t expect them to be wearing black and have pointy hats I wasn’t convinced by the pink pyjamas that they wore- they just didn’t suit the overall mood.

However, where the production does score is in its no nonsense approach to the text. Not only is it cut but it is rendered at tremendous pace  which this play always needs to maintain the sense of events rushing towards the protagonists. In particular the short scenes which make up the tail end of the play are almost reduced to single images as events move frantically towards the climax. 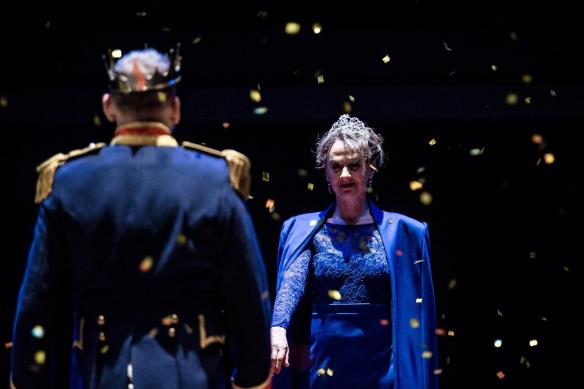 And what of Ecclestone and Cusack? While they put their own mark on the roles, I’m not sure either is entirely successful in capturing the essence of their characters. Ecclestone’s blunt northerner approach is pretty convincing as he matures into a manspreading tribal warrior and his delivery of the set pieces brings a degree of freshness to the words. In the first few scenes I thought he seemed underpowered and I assumed it was going to be a thumbs down; but his performance grew on me as the play progressed. Cusack interestingly followed the opposite trajectory starting really well but fading fast towards the end. I found her performance of the sleepwalking scene almost risible. Raphael Sowole makes  a better ghost than he does a live Banquo while the rest of the thanes are the usual interchangeable bunch even if they do give solid support. Probably the standout performance is from Edward Bennett as Macduff; he is particularly moving in the scene where he learns of the death of his family and which makes his search for revenge entirely believable.

This was a more than competent generally unfussy account of the play which probably sits somewhere in the middle rank of versions I have seen. Fortunately, I managed to swerve the, by all accounts dreadful mess of the almost concurrently produced National Theatre version in the same year. However,  I think I should have liked to have seen Peter O’Toole’s 1980 stab at it, if only to see why it was so universally derided; the Sunday Times called it “a milestone in the history of coarse acting.”  It’s remarkable just how difficult a play it is to get totally right but it can be done because I saw it happen – Ian McKellen and Judi Dench did it definitively in the mid-1970s. In fact if you want to see a version of the Scottish play that will really hit home then head for Broadway HD where this version is being shown.

Macbeth is available via the BBC iPlayer for two months. Click here

It is part of the BBC’s Culture In Quarantine strand which features five other recent RSC productions. Click here