Following yesterday’s review of Doing Shakespeare this looks to be shaping up as a Shakespeare week – or at least a Shakespeare related week – as I finally found time to catch up with the interestingly titled William Shakespeare’s Star Wars. Taken from a fairly recent sub-genre of writing, the mash up, this takes as its intriguing premise the idea of Star Wars having been penned by the Bard. In actuality the book (which came out in 2013) was written by Ian Doescher and is both a parody and an homage. It was brought to the stage (well screen) by the enterprising The Show Must Go Online project. TSMGO is the brainchild of actor Rob Myles and its main mission is to systematically produce online readings (although they are far far more than that) of each of Shakespeare’s works in the order in which they were written; I had the pleasure of taking part in Love’s Labour’s Lost six weeks back (click here for my account of this). Occasionally however the project breaks ranks and produces something Shakespeare connected rather than Shakespeare penned. Thus, William Shakespeare’s Star Wars arrived to entertain us on, of course it did, May 4th.

Produced, apparently, by 16th Century Fox, author Doescher actually takes part in this online production. He assumes the role of Chorus in the vein of the character who appears in Henry V to set the scene and implore the audience to use their imaginations to “piece out our imperfections”. This is entirely necessary. Where Shakespeare had to find a way to raise two opposing armies, this show has to conjure up alien worlds and characters, light sabre battles, futuristic transportation and the destruction of the Death Star. And, in case you’re wondering, yes, all those things are present and correct; I’ll refrain from spoiling the surprise by revealing details. 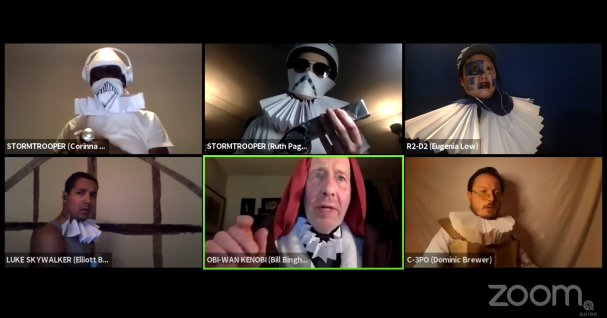 The rest of the cast come from all points of the globe and are a mixture of professional and amateur actors who are clearly having a ball. While nobody entirely resembles the original filmic incarnations of the characters there are some inspiring homages. Bill Bingham as Obi Wan Kenobi has more than a whiff of Alec Guinness about him and Dominic Brewer’s CP30 captures the essence of the fussy droid. Both he and Eugenia Low’s R2D2 play the comedy well and it begins to dawn on you that the characters essentially fulfil the clown roles in many a Shakespeare play. Elliott Borneman and Tiffany Abercrombie certainly capture the feel of Luke and Leia; the latter sports the instantly recognisable bagel hair style. Until he revealed his true voice in the Q and A, I was convinced Sam Benjamin (Han Solo) was as American as Harrison Ford.

There are some cleverly improvised outfits and remarkable props bearing in mind that the show was created at the height of lockdown when getting out of the house to find anything was pretty much a no no. I was particularly taken with Darth Vader’s (Miguel Perez) Covid 19 mask which brought the piece right up to date. The characters all wear Elizabethan ruffs which is a nice sight gag. There is an evident sense of pride and care in getting things right and an attention to detail which is quite astonishing considering how quickly TSMGO’s shows are put together – we are talking days rather than weeks. There are even special effects as things blow up, space craft fly across the darkened sky and Obi Wan and Darth Vader ignore social distancing to recreate the light sabre duel. The Princess Leia hologram scene is particularly well done. 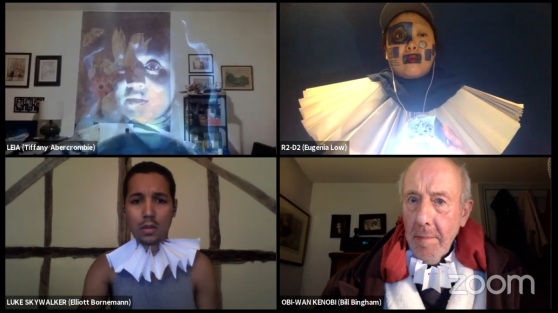 Doescher’s script is written in iambic pentameter with dialogue from the film reconfigured to suit the metre. There are more than a few references to the original Shakespearean canon; some of these are direct lift quotations while others are adapted to suit the scene they are part of. It’s great fun playing “spot the reference” both ways round. Wisely the production confines itself to a 40 minute time slot – anymore would be stretching the premise too thin. However, the online video runs for considerably more than this as there is a fascinating Q and A session at the end where some of how it was done is revealed. There’s also an intriguing introduction from Steve Purcell, an associate professor of Shakespeare and performance studies at Warwick University, no less.

The Show Must Go Online is to be congratulated for its ambition both with this individual performance and its wider Shakespearean project. It was one of the very first to enhance the power of Zoom for live performance and if you’ve yet to see one of their performances then what are you waiting for? They are online every Wednesday evening at 7.00 pm and all the past shows are available on their You Tube channel. William Shakespeare’s Star Wars was, quite rightly, one of the first recipients of an OnComm, a new award for online performance which seeks to recognize the way the art form has had to quickly morph (there’s more about the award here). TSMGO are in the forefront of showing theatre a way forward as it is clear that the whole of show business is going to be massively affected for some time to come; as the subtitle of this show has it they provide Verily, A New Hope.