Among the more unusual theatre credit listings I have ever come across, one of the most surprising must be for a “Chimpanzee physicality and vocalisation consultant”. Yet this is the position occupied by Peter Elliott on a production of Great Apes originally written by Will Self and adapted for the stage by Patrick Marmion. It originally played at east London’s Arcola Theatre in 2018 and is now available to stream online.

The conceit of the piece is that one day Simon, our hero, wakes up and finds that he’s been transformed into a gigantic beet…. no, hang on, that’s Kafka’s Metamorphosis… Simon, our hero, wakes up and finds that Sarah, his girlfriend, has been changed into a chimpanzee. In fact, it would appear that the whole world population has been transformed into chimpanzees;  it’s only Simon who isn’t simian. Or is he hallucinating after all those drugs he took the night before? Or has he even woken up yet? Whatever the case, Simon, a Turner prize winning artist, is hustled off to a psychiatric unit where he is placed under the care of radical thinking chimp Doctor Zack Busner to be cured of the psychotic delusions that he is perceived as having. Needless to say, everyone there has also turned ape overnight and Simon seems to be the only articulate human left alive; the rest are busy running around wild in the forests and jungles or in captivity in the zoo. 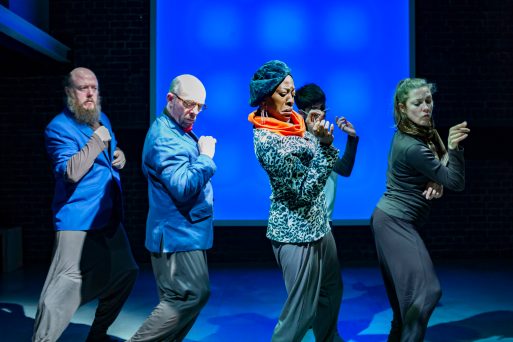 It’s a fascinating premise of role reversal and one that is crammed with many ideas- perhaps too many – as pot shots are taken at the role of the family, the art world, sex, violence, medics and the NHS, evolutionary theory, species preservation and many other topics. This rather scatter gun approach is amusing enough but means that nothing quite receives the depth of analysis it deserves. The trademark caustic wit of the novelist has been well and truly preserved in the script and the various illusions to literature and popular culture are a nice touch. Kafka has already been mentioned but the writing is also heavily invested in the satire of Jonathan Swift. Self/Marmion also reference Planet Of The Apes and even Love Island. Then there is the monkeying around (sorry) with language such that we have references to “ladies and gentlechimps” and “chimpmanity”; I particularly liked the notion of exasperated chimps going “humanshit”. As with all Self’s work you have to keep on your toes (or should that be knuckles?) 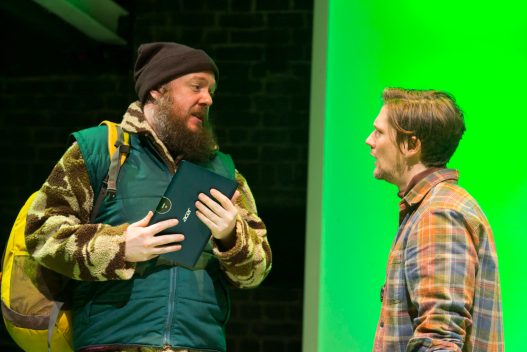 The cast of just seven are excellent, many of them finding multiple chimp characterisations to suggest a whole society which looks familiar but isn’t quite. And they really throw themselves into the physical aspects, leaping around and screeching, grooming and presenting their backsides to each other, climbing ladders and pant-hooting (look it up). Articulate chimps these may be, but they have retained their social structures, means of group communication and functional attitudes to sex alongside their more sophisticated milieu. You can see the work Peter Elliott (see above) and movement director Johnnie Riordan must have put in – indeed they are the unheralded stars of the show and have produced a highly convincing picture of an ape dominated world. Simon is played by Bryan Dick whose certainty that he is human is gradually undermined – each time he reappears he subtly changes until we become unsure whether the character is a human with delusions about everyone else or a chimp with delusions about himself. The play, however, is quite rightly dominated by the alpha male posturings of Busner, except that just to mess with our minds a little bit more, this part is very strongly played by Ruth Lass in perhaps the first ever example of casting which is cross gender and cross species. 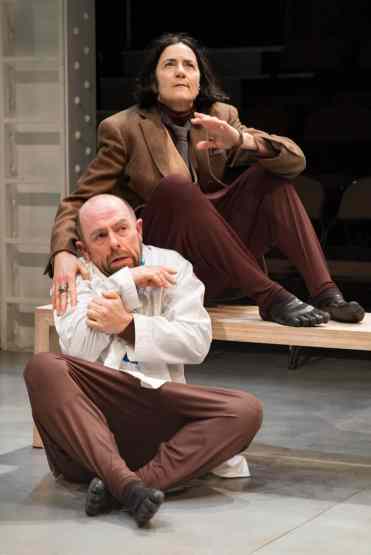 Constructing a play from a novel text invariably means that staging has to be inventive – a book doesn’t need to be restricted by location setting – and so it is here. We are transported from Simon’s flat, to a nightclub, the hospital, an art gallery, Busner’s home, the zoo, Oxford University and even Africa with little more than basic furniture and a large screen. It might be supposed that the screen would be used for video footage or even still photos of the various locations but not a bit of it – in fact I’m not really sure why it was there other than for some mildly interesting light displays (Matt Haskins). There’s a lot more thought been given to Sarah Beaton’s costume design which thankfully doesn’t try and ape (sorry) the real thing though there’s a lot of brown and black in evidence. Mostly the “look” is down to the actors’ deportment; short length crutches are cleverly deployed to obtain the correct level of stoop.

As is made clear in one of the discursive sections of the play, it is only by a small quirk of evolution that the current situation pertains and it is from this premise that the piece is ingeniously constructed by director Oscar Pearce and his troop (sorry). I learned a lot about ape behaviour and perhaps even more about that of humans which, of course, is the point of such satire. We are actually closer to apedom than might be thought; the final seconds of the play make that absolutely explicit.

Great Apes is available on You Tube. Click here.