For three days last week, London’s Almeida Theatre played host to Shifting Tides, a digital festival aimed at 14 – 25 year olds “exploring the intersection between art and the climate crisis”. Two predominantly drama focused outcomes resulted. The first is an audio drama commissioned for the Young Almeida Company and the second a series of short video plays by young writers. All this material is now currently available online, along with artwork and poetry also relevant to the overarching theme.

As Waters Rise is the title given to a three part play by Ben Wetherill. Apparently, this was originally commissioned last autumn as a stage project but has been rewritten for audio; material has been reworked to take account of the corona virus pandemic. However, it is predominantly concerned with the effects of climate change on young people in London. While the word “series” implies the continuity the pieces certainly have, it would probably be more accurate to say they are three one act plays which use the same basic scenario. Everything takes place in 2025 as large parts of London have been submerged under rising waters caused by global warning. People have already died as a result. A slow to act government (I’m saying nothing!) has introduced new laws in an attempt to maintain the social order. Dissenters are not tolerated but that doesn’t stop an air of rebellion permeating the population as inequality becomes even more pronounced. 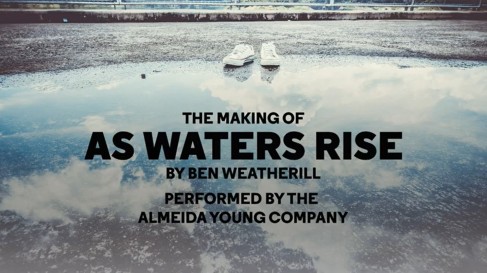 In the first play, The Other Side Of The River. a group of disaffected teenagers decide to redistribute wealth by breaking into the home of Alyssa, an over entitled media star, and make off with her jewellery. However, there are aspects of the group’s pasts which mean that these modern day Robin Hoods are not quite acting as a united team. In part two, Near The Surface, the main action takes place in a counselling circle where young people who have raised political objections by attending a protest or wearing the wrong slogan on a T shirt have been placed to be re-educated. One participant has lost her mother through what she regards as government inertia and boldly seizes her moment. In the final instalment, Coming Up For Air, a group of young people find themselves on an enforced competitive hike where they learn a good deal about themselves and each other. Some tenuous connections are made with the first two parts though things are never quite tied together.

All the roles were separately recorded at home by the participants and then knitted together by director Alex Brown; the “joins” are not at all conspicuous. The 14 – 18 year old actors make a very good job of the dialogue and provide some interesting characterisations. Although clearly an ensemble effort, the most memorable performances for me were Muhammad Abdraheman as Zack in part one and Pollyanna Knight and Tom Cadley as Beth and Josh in part two. The second play was, in my opinion, the strongest being a feisty satire which was keenly aware of its targets and provided some convincing arguments. An interesting listen, then, to plays which focus on a topic of concern to many.

Writing The Climate consists of seven short plays written after a masterclass from dramatist Evan Pacey. There is quite a diversity of views expressed here from the over anxious 12 year old who feels she is not doing enough (and certainly not as much as Greta) to the angry father who just wishes that Extinction Rebellion protesters who have halted his bus would understand that he has to earn a living in order to provide for his family. Over half of the pieces are monologues though there are a couple that spread their wings to incorporate more than one actor. Continuity and consistency of presentation is achieved through the direction of Abi Falase and the acting of the ten participants is universally sound. I particularly liked the sincerity of Mohamed Bangura in the piece In Waiting For The Hangman’s Noose where he his calm measured delivery is clearly at odds with the emotions the character is feeling. Even better is Tuesday’s Surprise Livestream where travel vlogger Mike attempts to defend the indefensible and reveals the inherent selfishness of his character. The use of chat messages scrolling up Mike’s screen adds an extra dimension and I especially liked the one at the end about how to finance a trip to the Dead Sea. Both the performance by Patrick Ashe and, especially the clever writing of Joanna Woznicka combine to make this a highlight of a good little series.

If you’re interested in the subject of climate change (and surely we should all be), Shifting Tides is a good way into the topic but it is also entertaining in its own right. It’s good to see the Almeida concentrating on young writers and performers and making sure that talent does not go unnoticed at this difficult time.

As Waters Rise and  Writing The Climate are both available through the Shifting Tides section of the Almeida Theatre website. Click here