In 1879 the sound of a door closing brought Ibsen’s A Doll’s House to a significant and society convulsing conclusion. Jane Clegg written by St. John Ervine has many similarities with Ibsen’s masterwork and I’m sure that it is no coincidence that this now streaming 2019 revival from the Finborough Theatre finishes with the same noise. In both instances it is the sound of change as the position of a male dominated world shifts on its axis and things will never be quite the same again.

Set in 1913, just before another great world shift, the title character starts the play as a seemingly typical wife and mother of the period. Jane has a home, two children, a husband and his mother to look after and clearly does so more than competently. What she does not have, however, is any sort of financial independence. Recently a relative has died leaving her a reasonable sum and, much to her husband’s and mother-in-law’s disgust, she has refused to hand it over to the man of the house as would have been common practice. Rather she wants to keep it secure for her children’s future. She no longer trusts her husband, Henry, who has no head for economic reality, who gambles and who has had an affair – indeed, it transpires he is still having the illicit relationship and had hoped to get his hands on the legacy in order to decamp with his “fancy woman” to Canada. Jane is not going to let this happen and so he turns to stealing from his employer. One fateful night all of Henry’s chickens come home to roost at once and the steadily failing marriage is dealt a final irrevocable hammer blow. 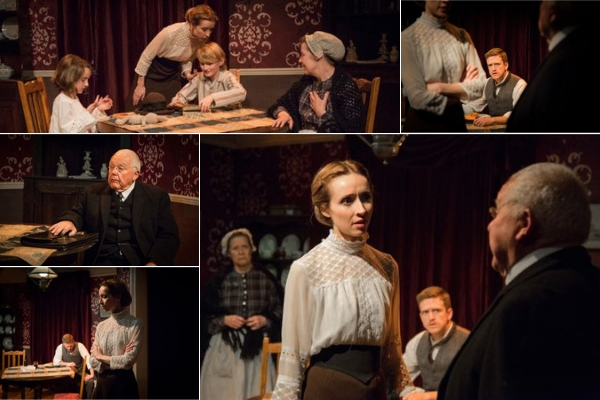 This piece falls into the category of a well-made play of three acts and is none the worse for that. Its elegant structure and growing sense of tension make it an absolute pleasure to watch and, even if some of the dialogue sounds a little clunky to modern ears, that is more than compensated for by a plotline that is clear, uncluttered and knows what it wants to say. David Gilmore’s lucid direction enhances the author’s intentions and he has gathered a strong ensemble to play out this domestic tragedy. Alix Dunmore is the quiet yet steely centre of the household with determination etched on her face. She makes it clear that Jane’s concern for her children is all that has held her back from stepping into the unknown before this point and she leaves us with the impression that her character will weather this particular storm and that her life will become easier. As Henry, Brian Martin is excellent at demonstrating the weakness at the heart of the feckless husband. His deception and lies close in on him and he reacts just like a cornered child adding bluster and prevarication to his morally and financially bankrupt persona. It is clear that at least some of his failings are a result of being over indulged by Mrs Clegg Senior. She represents the old order against which Jane is quietly rebelling; it is the blind willingness to adhere to accepted social norms which has facilitated and encouraged male domination. Maev Alexander is convincing as a woman who truly does not see why things should be otherwise and has become complicit in propping up the system. Matthew Sim’s bookie, Mr Munce, strikes the one false note in the play though the fault lies in the writing rather than the skill of the actor. The dialogue Ervine has given him seems rather cliched and one note and the character’s repeated threats to expose Clegg start to get wearisome. Sidney Livingstone as Clegg’s supervisor, Morrison, lends appropriate gravitas to the proceedings.

The small Finborough stage is used to good effect by designer Alex Marker providing a cosy domestic Edwardian parlour. In fact, the restrictions work to the plays advantage as we see what a small world Jane Clegg inhabits. Costume design by Carla Evans keeps pleasingly within the designated period. It is also a mercy that every word of the dialogue is clear on the video (not always the case) and the visual framing has been used to good effect with close ups coming at appropriate moments. I’m not sure if the dialogue has been cut but at slightly under ninety minutes the piece does not outstay its welcome and is all the stronger for it.

Jane Clegg is one of those plays that falls into the category of a forgotten classic, so all credit to the Finborough for mounting this domestic drama originally seen in Manchester in April 1913 with Sybil Thorndike playing Jane. It came at the height of the call for women’s suffrage and could not have been more timely in its depiction of a woman struggling to break the economic bonds that hold her prisoner. In a strange last twist to the story, about six weeks after the premiere, St. John Ervine was standing next to suffragette Emily Davidson at the Epsom Derby when she took the fatal step into the path of the king’s horse.