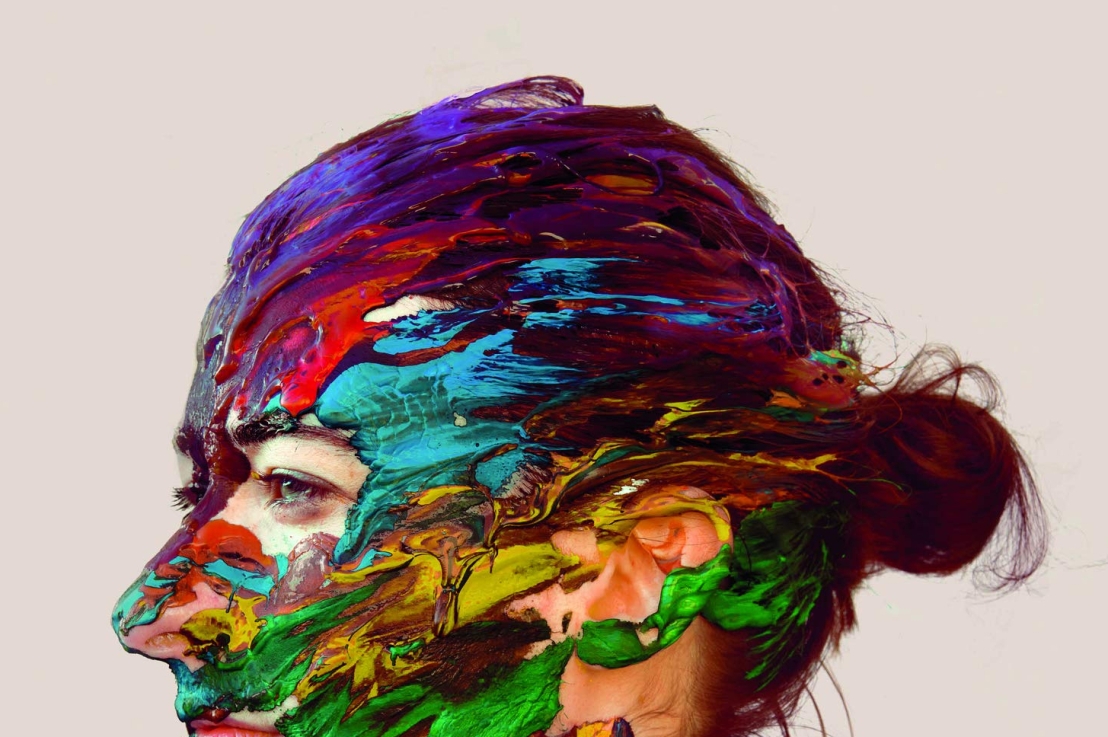 One of the early entries into the lockdown theatre world was Breach Theatre’s It’s True. It’s True. It’s True: Artemisia On Trial. After some time on furlough it’s now back online and available to watch again. Having not quite got to it before, I was determined to catch up with it while the opportunity is still there and I’m glad I did for it is a piece of quality theatre which has much to say about the world as it was and the world as it is. 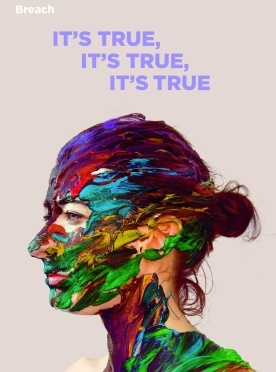 Essentially this is verbatim theatre with a twist, the twist being that rather than concentrate on recent events we are getting a glimpse of the world back in 1612. The setting is the trial of an Italian painter Agostino Tassi who is accused of raping a fellow artist, 15 year old Artemisia Gentileschi. Most of the court transcripts survive and Breach have used these to formulate this devised piece which packs a huge punch and demonstrates that 400 years on we still haven’t come all that far. The court trial may be notionally of Tassi but, as the title of the piece tells us, it is the young girl who is really in the dock. Artemisia’s testimony is called into question, especially when the court allows the defendant to cross examine her directly. He has an artistic reputation (he works for the Pope); she does not. Her personal reputation is hung out to dry by various young men who claim to have had sex with her and by her supposed chaperone/confidante, Donna Tuzia. Incredibly, she is tortured with thumbscrews, apparently the better to establish the veracity of her statement – it cannot be Tassi as his artist’s hands must not be damaged! All this makes for strong stuff which rightly promotes outrage in the viewer but – thumbscrews aside – is it so very different today? At the time of writing the Johnny Depp libel trial with all its lurid detail has just finished. Even though Tassi was found guilty after the seven month proceedings, the establishment found a way to get round this and he was soon at liberty again. This, despite the fact that quite apart from the rape, Tassi planned to murder his wife, committed incest with his sister-in-law and had been planning to steal valuable paintings from the Gentileschi household. But he did work for the Pope so…. 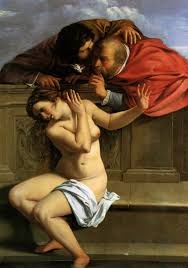 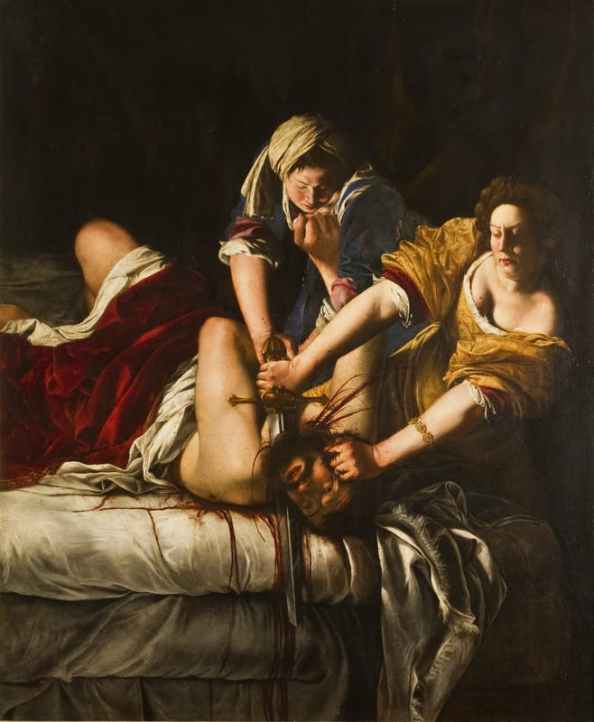 As this is partly a play about art, the setting (Luke W. Robson) is made to look like a studio with a painting frame dominating the backdrop and along the way we are treated to a pair of stunning recreations of Gentileschi’s artwork based on two Old Testament stories. The first is Susannah and the Elders which has been seen as evidence of and a visual allegory for the young girl’s sexual harassment by men. In the second, Judith Slaying Holofernes, there is a sense of Artemisia taking her revenge (Holofernes is said to be based on Tassi) which will continue to echo down the ages. Lucy Adams’ strikingly lit tableau in both instances enhances the clever staging. 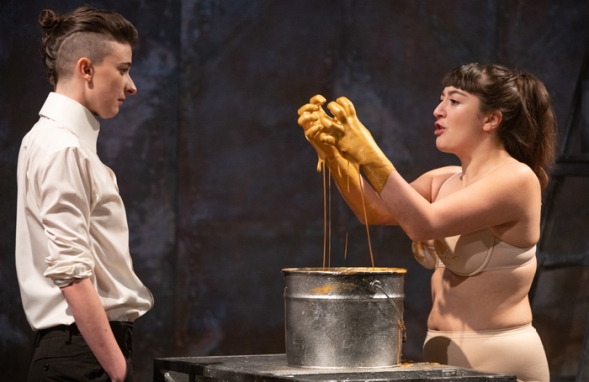 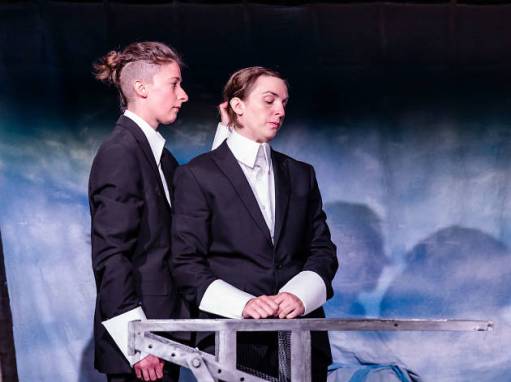 Three actors multitask as the principal characters and as a range of lawyers and other witnesses and extremely good they are too. They pointedly appear first in oversized (male) lawyer clothing which they continue to wear even when playing the female characters, demonstrating the acute masculine bias of the trial itself. For quite a significant portion of the play Ellice Stevens as Artemisia is stripped practically naked to give her testimony – a telling visual metaphor for what is going on. Stevens cuts a strikingly brave figure as she refuses to compromise herself. At one point she repeats the words “It is true” sixteen times while holding the audience in her gaze (unfortunately this does not really have the power it should on video) and we are left in no doubt that it is so. As Tassi, Sophie Steer is particularly frightening in demonstrating the dominant and haughty male arrogance which guided proceedings and oozes entitlement as his story shifts to suit his claims. Kathryn Bond has most of the (dark) comedy as Donna Tuzia who has done more than she will admit to enable Artemisia’s distress. There is also a late entry appearance by Harriet Webb who helps Artemisia find the will to survive. 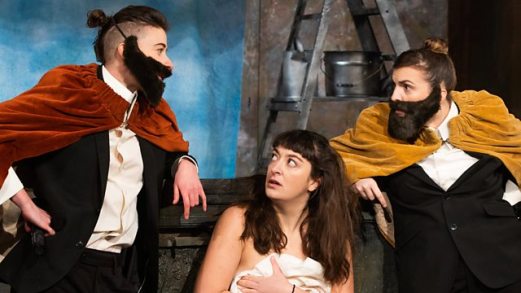 The script as written by Stevens and director Billy Barrett is economical and forceful (especially if there were seven months of court transcripts to work through) and music both loud and brash and hauntingly choral is used to maximum effect. My only disappointment was with the last five minutes or so as the piece seemed to deteriorate into a pastiche rock concert. I think (though I’m not sure) that this was meant to somehow celebrate Artemisia’s indomitable spirit and the power of feminism but it just seemed a bit lazy and cliched – shouldn’t it have been something from the world of art which rounded out the show? That grumble aside this can be thoroughly recommended as a clever, intelligent and stunning piece of theatre. Unlike me, you’re advised not to leave it so long before streaming this.