Slightly unlikely as it may seem, there are currently two online shows which deal with the subject of the four Brontë siblings who made such a huge splash in the literary world (well, three of them did anyway) as the authors of Jane Eyre, Wuthering Heights and The Tenant Of Wildfell Hall. The two shows both feature exactly the same characters but have very different styles and aspirations; it seemed the time was absolutely ripe for comparisons.

The first piece, At Home With The Brontës, has been released as part of this year’s Edinburgh Fringe Festival online by Lemon Squeeze productions. It consists of two monologues and a duologue involving all four of the Brontë siblings and more or less tells the whole story of their literary careers as played out at Haworth parsonage in Yorkshire. Rather than start with one of the success stories, writer and director Joan Greening focuses on the lesser known brother, Branwell. He is full of literary and artistic promise but, unfortunately, he is also full of alcohol and narcotics which seriously curtails his compositional abilities. Stu Jackson adequately conveys Branwell’s troubled soul, but the piece is mainly expositional to set the scene for the more famous sisters. Julia Munrow as Emily picks up the baton and reveals more about the composition of her novel and the intertwined lives of the family.

By this stage I assumed that two more monologues were to follow and probably in the order in which the quartet died. Instead there follows a section where Anne and Charlotte directly interact. Although this to some extent provides a welcome change of direction, I’m not sure it adds anything which could not have been achieved by keeping to a structure of solo voices. Emma Hopkins plays Anne as the obvious peacemaker while Sarah Archer provides some moments of comedy as the rather too pleased with herself Charlotte. It makes her characterisation distinctive but I’m not sure whether this was an invention of the writer or that Charlotte really did think she was a cut above her sisters. 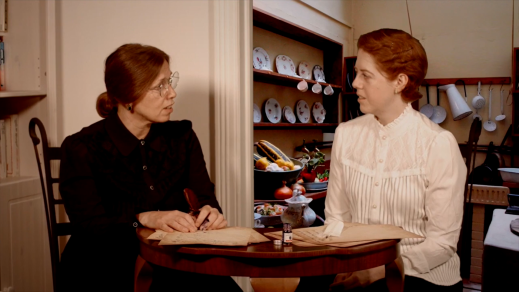 The production is unhurried and a pleasant enough way to spend an hour – and I certainly learned some things I didn’t know before – but the main thrust of the narrative concentrates on exposition and I felt I wanted to find out more about the souls of these people. It struck me that the various pieces would probably make for a good interactive encounter with character guides at Haworth.

Although, as already indicated, Wasted tells essentially the same story, the style could not be more different. Essentially a rock musical it is being streamed by Southwark Playhouse where it was first performed in 2018. Given the rather more laid-back atmosphere of the first piece this is much more high energy with insistent rhythms, loud guitar riffs and some histrionic vocals. Christopher Ash’s music while not eminently memorable – and certainly not particularly hummable – covers a range of styles including rap and a pastiche of opera. The lyrics by Carl Miller are not, in this recording anyway, always particularly clear; perhaps the sound balance was better in the live situation. Miller is also responsible for the book which follows the same chronological trajectory as the other piece above but spends rather more time examining the individual situations of the siblings. In fact, it is probably too much time; the piece runs to nearly three hours and is seriously in need of some trimming  in this non-live incarnation. Staging is very simple and could do with some more variation – I lost count of the number of times one of the quartet stood at each corner of the square wooden stage and sang straight out. Possibly this is good rock concert practice, but I’m not so convinced by it for a staged drama. 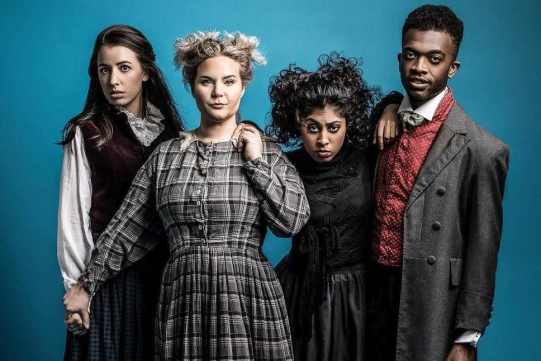 The performances were definitely enjoyable with a particularly spirited turn coming from Natasha J. Barnes as driving force (and rock group manager) Charlotte. Siobhan Athwal’s portrayal of the ethereal Emily was much as expected given the context in which she was being played – an interesting mix of Kate Bush and Stevie Nicks with a dash of Alice Cooper. Her troubled soul comes to the fore in the number “I’m A Goth Before My Time”; I couldn’t decide whether this stereotyping was deliberate and therefore cleverly self-knowing or just rather lazy. Anne’s frustrations seem to revolve around her inability to lose her virginity; Molly Lynch portrays the youngest sister, much as I suspect she was in real life, as the family peace maker. And then there’s the real rock and roll tortured soul/victim of Matthew Jacobs Morgan as brother Branwell. I felt that he came across as a bit too nice rather than the feckless brute that he probably was, though it was interesting to see the parallels drawn between him and sister Charlotte as they both pursued unrequited loves.

Branwell, of course, is the one who truly squandered his talents, wasting both his time and his body with drugs. Wasted also refers to the ever present consumption/TB/wasting disease which finished off most of the family. The musical, like the title, can be viewed at several levels and I can see why it was a success in a live context but I’m not so sure it comes across as well in this recorded iteration. Perhaps seeing this not long after the first piece provided a bit too much Brontë in one fell swoop. Both these productions have their plus points and it is interesting to see how the same subject matter can be treated in radically different ways. However, ideally, I’d have liked the length of the first piece and the energy of the second combined to make something truly memorable.

At Home With The Brontës is available via Online@TheSpaceUK. Click here

One thought on “At Home With The Brontës/Wasted (Online review)”