As one of, if not perhaps the most, pivotal venues for the Festival it’s pleasing to see that an Edinburgh institution has taken itself online as Traverse 3 to sit alongside the usual physical Traverse spaces. Their eclectic mix of events focusing particularly on new writing can be accessed with a pass and as Tuesdays seem to have become my fixture for the festival, I decided my visit would focus on what they had to offer.

The venue’s Breakfast Plays have become a fixture, so what better way to start the day than by accessing one of the five new pieces which are appearing online in audio format? Being a sucker for an interesting title I went for Contemporary Political Ethics (or, How To Cheat) by Jamie Cowan a young writer who shows plenty of promise. I thought this was a terrific piece very well directed by Gareth Nicholls with memorable characters and some cracking dialogue. Terry is running a poorly attended polling station with the help of Hannah. Although they have firm and somewhat opposing political views, they have been holding them in check out of respect for the democratic process. Into the mix comes Kev, a 17 year old on academic probation instructed to

observe the process for his Modern Studies class. He is bored rigid, truculent and totally uninterested in the election process; Kev acts a catalyst and soon the trio are all at each others’ throats. Bhav Joshi is first rate as Kev and captures just the right tone for the needling uncooperative student. Robbie Jack and Anna Russell-Martin are also on fine form as the adults; their dogmatic approach to life is ultimately as unappealing as the teenager’s. This is a cracking play which would have been even better if ten minutes had been shaved off, but Jamie Cowan can be rightly proud of leading this year’s Traverse series of new writing.

From one troubled youth to another – this time it’s Adam in a monologue called Removed by Fionnuala Kennedy. He has just turned 18 but takes us back through the last ten years or so of his life to a time when he and little brother Joseph are removed from their alcoholic mother and taken into care. First, this is with various foster parents but when he refuses to be adopted he is placed in a care home. Here he grows up fast among a group of fellow LACs who are vividly bought to life. Finally, we see Adam taking the first tentative steps into full independent adulthood – life clearly isn’t going to get any easier. This play could so easily have been one long round of clichés, but Kennedy 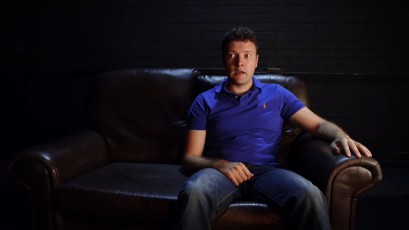 skilfully avoids this and actor Conor O’Donnell has just the right amount of ordinariness about his characterisation to convince the viewer they are watching real testimony. Which in a sense we are, as Kennedy has taken the stories from  interviews with members of  the Voice of Young People In Care group; fittingly some of them make fleeting appearances at the end. Nor is it all doom and gloom as might be anticipated – many of the anecdotes raise a smile, even if, at times, it is a wry one. This piece makes inspired use of the camera to emphasise Adam’s emotions and is a clever piece of direction by Emma Jordan.

Great though it is to be “at the Traverse” it wouldn’t be a real Edinburgh experience if one didn’t have a little wander. So, I thought I’d try an online fringe “branch” with the not particularly snappy title of  the Thornhill Theatre Space World Wide Virtual Fringe Festival; their material is all hosted on Facebook. In true fringe style I stuck a virtual pin in the map and came up with Proxy, a monologue both written and performed by Heather Alexander. In it she plays Skip, first as a five year old (cleverly done) and then 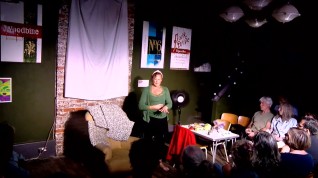 as an adult. She is a victim of factitious disorder – a family member presents someone they are ostensibly caring for as ill (it used to be called Munchausen by proxy syndrome, hence the piece’s title). The perpetrator is April who claims that the child has extensive food allergies and therefore, virtually starves her to the point where she is eating paper from a book. The tale is a harrowing one but very well put across by Alexander despite a couple of fluffs on what was clearly a very hot night for performing.

It was back into serious mode for Those Girls a performance piece of Abigail Cook’s poem How We Survive (Girlhood). Reimagined from a previous staged version, this is a well-crafted and moving investigation into the many issues of being a teenage girl and covers topics such as body image, racism, relationships, social media and all the other pressures which exist as part of modern day life. The words of the poem are interspersed with girls talking about their experiences, making more explicit the points Cook makes. There is also a thoughtful change of tack in the middle of the piece which came as a pleasant surprise. A dreamlike quality pervades many of the images and this tone is emphasised by a mournful piano soundtrack. It is not a long piece, but it is most definitely a powerful one.

Finally, it was back to The Traverse for a filmed drama simply called Declan. The dialogue for the piece is taken from Kieran Hurley’s hit play of 2018 called Mouthpiece which examined the social and cultural divides of Edinburgh as represented by Declan, a 17 year old undiscovered artist and Libby, a middle-aged female playwright. In an act of cultural appropriation, the latter writes the former into a play and the two eventually battle for ultimate control. A review of Mouthpiece in The Scotsman stated that the “story might have worked better as a monologue, tightly focused on the anger and potential of Declan’s journey from naivety to disillusion and beyond” and that is what this version has done. Libby is still in the story but everything is told from Declan’s point of view. Having not seen the original it’s hard to say whether this new version is an improvement but it certainly makes for an arresting and visceral half hour. 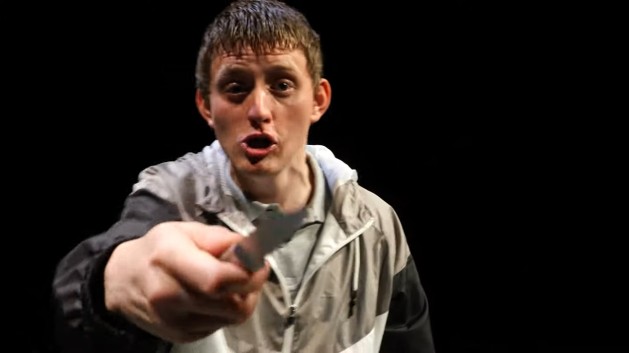 Angus Taylor gives a desperate edge to Declan’s personality and there is always a sense of violence bubbling away under the surface; eventually this is turned in against himself. The camera gets in very close and the hurt and anger is palpable in the actor’s eyes. We see Taylor both as Declan and as a stage version of Declan and if that isn’t meta theatrical enough just to add another layer the character is also played at brief points by director Lorn Macdonald ….who was Declan in the original production of Mouthpiece – keep up at the back, there! The film follows Declan from the Traverse itself, out onto the crags and into areas of Edinburgh where no tourist would dream of setting foot. Sometimes the piece uses text overlay and sometimes animation recalling the artwork of Francis Bacon with whom Declan feels an affinity. The shifting dynamic of the structure produces a sense of real unease and leaves the viewer thinking about the nuances of the piece hours later.

So ended my third Edinburgh outing –  a day when everything I sampled was of high quality and provided many powerful moments on which to reflect. Followers of these festival reviews will know that I have tried to “free form” my choices on two previous occasions to provide a breadth of experience only to find themes kept emerging of their own accord (all the pieces in week one were about the supernatural and all those in week two about the pandemic crisis). Inevitably then, the elements in week three also formed themselves into an overarching theme – that of the stresses and strains of the lives of young people. It seems that themes just can’t help asserting themselves. Ah well, one last attempt at randomisation next week!

Contemporary Political Ethics (or, How To Cheat), Removed and Declan can be accessed via the Traverse Festival website. Click here

Those Girls can be accessed via the Edinburgh Fringe listings. Click here  (The original poem can be found here)