Something like 200 people are in the cast of Waiting For The Ship To Sail; this, Chickenshed’s annual spring show, was cut off in its prime this year with the sudden arrival of Covid 19 so that’s a whole lot of people to disappoint. Fortunately, in this brave new world of online performance that wasn’t the end of the story and the show lives on in video form. The piece is about a subject which has been, once again, growing in importance of late – that of the plight of migrants and refugees. What could be more appropriate for a company that prides itself on the notion that “we can all choose to create a better world where everyone is welcome and everyone is included”.

This piece (I can’t really call it a play) was inspired by Elizabeth Laird’s book Welcome to Nowhere (Where Do You Go When You Can’t Go Home?) which was written after the author volunteered in refugee camps. However, it is not a conventional narrative focusing on a group of characters. Rather it approaches the topic universally and examines the migrant experience via six phases of experience as outlined in the book. Thus, section one, “Home”, focuses on the experiences of migrants in their original locations and examines why it is that they feel compelled to leave. A lot of the work is based on testimony (actual, I assume) of desperate people and vividly highlights the trials they have to endure to make their voices heard. The cast work in organised groups which ebb and flow onto the stage and engage in stylised movement and interpretive dance to highlight the various themes. The downloadable programme states: “The action is a single thread of phases which move seamlessly from one section to another. Each one invites you to be a part of the narrative, which is structured more like poetry than drama”. While I take the point entirely, to me it seemed more akin to another art form, that of a moving collage with the performers’ individual contributions combining to form a cohesive picture in the viewer’s mind. 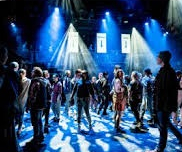 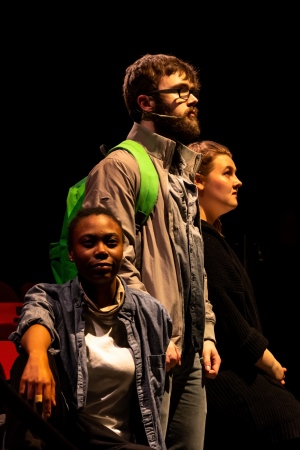 While I have nothing but admiration for the company in tackling such a bold and important subject, I did find watching the performance rather one note. It’s difficult to bring light and shade into a performance piece on a subject which doesn’t have a lighter side – neither am I suggesting that they should have done so. But there was rather a tendency to hammer home the points made and it was all in danger of becoming very predictable. Being a dispossessed migrant must be a horrible experience but as a spectator I had understood that after the first twenty minutes of the show, and there was simply too much testimony of a similar nature to keep things fully interesting. The one interesting and unexpected twist was, at one point, to view events from the perspective of the smugglers and I thought the last ten minutes was particularly powerful in making the point that we all have rather mongrelized backgrounds. As I’ve had occasion to say a number of times while reviewing online shows, I’m sure a lot of my feelings was to do with being at one stage removed and that I would have felt differently had I been there in the moment at the live event. 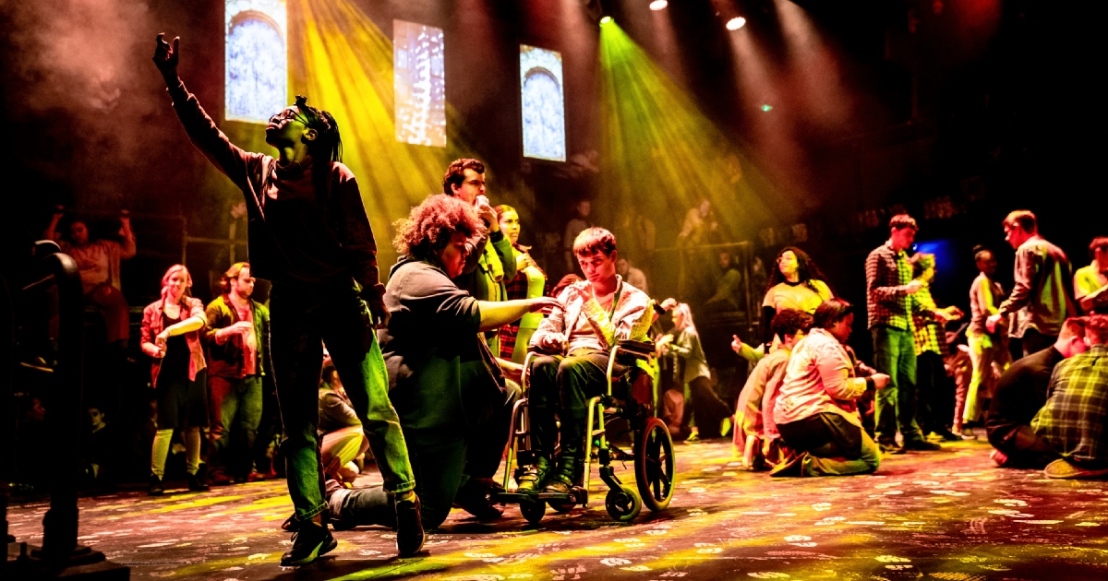 And so, I found myself admiring the skill with which the whole thing was put together rather than engaging with the piece on an emotional level. The staging was inventive and the thrilling lighting design of Andrew Caddies was particularly significant in creating mood and atmosphere. There were some pleasing songs from Dave Carey who also played the piano. Many of the cast have great singing voices as well as disciplined movement skills though obviously I’m not going to try and single anyone out because a) it’s simply not that kind of show and b) I don’t want to upset 199 others. Suffice to say that the level of commitment shone through. I notice there are no less than sixteen people credited as Creative Directors who are presumably responsible for individual sequences and the whole show free flows under the generally bold direction of Lou Stein. If nothing else Waiting For The Ship To Sail amply demonstrates that Chickenshed’s policy of inclusivity remains, on both narrative and performance levels, absolutely watertight.

Waiting For The Ship To Sail can be accessed via You Tube. Click here

A number of Chickenshed’s other spring shows from previous years are also available as is their version of David Walliams’ The Midnight Gang. Click here

One thought on “Waiting For The Ship To Sail (Online review)”