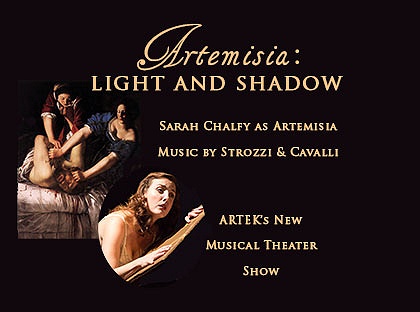 Artemisia Gentileschi has, rightly, enjoyed a bit of a moment as her paintings have gradually been rediscovered and her place in the ranks of the great artists has been recognised. Michael Palin examined her life and work in a fascinating documentary not long ago and already this year we have been treated to Breach Theatre’s It’s True, It’s True,  It’s True which I reviewed some weeks ago (click here). Now  with a major exhibition of her work just opened at The National Gallery in London, the release of Artemisia: Light And Shadow on video is therefore absolutely timely.

This is billed as “a one-woman multi-media show”; the first part is more or less the case (there is a harpsichord player accompanying the paly) but the second makes it sound rather grander than its restrained staging suggests. Writer Nahma Sandrow takes us through Artemisia’s life using snippets of her own writing from letters and so forth to give the piece authenticity. Thus, we learn how the young artist learned to paint and eventually became a celebrated figure in the courts of Europe – she was invited to London by Charles I – if then largely forgotten until fairly recently. We also learn something of her personal life and her five children, only one of whom survived into adulthood, and how she became the secret lover of a Florentine nobleman. The key incident which has tended to dominate her biography is her rape and the subsequent trial that followed. At first this incarnation of Artemisia doesn’t want to discuss the incident – it is clearly too painful for her. However, she eventually does – how could she not when it is evidently so fundamental to the development of her artwork? Even so, I do feel this element was underplayed and is much more powerful in Breach Theatre’s account which centres on the mockery of a trial which was undertaken.

Sarah Chalfy plays Artemisia as a determined figure who has clear ideas about her art and is not naïve towards the ways of the male dominated world she moves in. Good use is made of the jointed mannequins which artists employ especially when she tells us about her children and describes the thumbscrews that were used on her at her trial. The moments of biography are augmented by songs of the period written by Barbara Strozzi and Francesco Cavalli, two of Artemisia’s contemporaries (also largely forgotten). Chalfy sings beautifully and with real emotion and is accompanied by Gwendolyn Toth on a harpsichord. The songs selected provide an interesting gloss on the monologue, however, I did find that this element tended to be over dominant to the point where a play with music was in danger of becoming a concert with textual commentary. As the show is being presented by Artek – New York’s premiere early music ensemble – perhaps this was actually the intention. I can only respond that the dramatic impetus is still somewhat lost by taking this path. 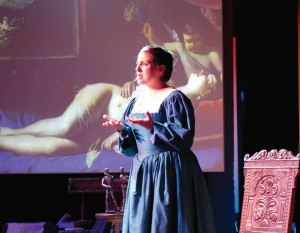 Paul Peers’ set design places us, mostly, in Artemisia’s studio where intriguingly and mysteriously her work is hidden behind some artfully swathed drapes. Reproductions of the actual artwork are projected onto a central screen and this is often cleverly done; when the trial torture scene is being recreated the projection concentrates on the hands of characters in the paintings. It is tempting to see her works as thinly veiled responses to her treatment by some of the men in her life – indeed Breach theatre’s piece takes exactly that tack, and it seems to be the case that she was particularly obsessed by painting Judith beheading Holofernes – but perhaps this reductive approach does her work a disservice. As an introduction to the artist behind the paintings this low key and thoughtfully staged biography will be of interest. However, if you want real drama then seek out It’s True It’s True It’s True or, even better still concentrate on the actual paintings themselves.

Artemisia: Light And Shadow  is available on You Tube – click here

One thought on “Artemisia: Light And Shadow (Online review)”