It being nearly Halloween I thought it was about time for a themed week and that I should start with a classic portrayal of evil. Having seen a version of the Scottish play recently (click here) the other obvious opening gambit was Christopher Marlowe’s Doctor Faustus. A version filmed at the Greenwich Theatre in 2009 being readily available that was the obvious way to head. 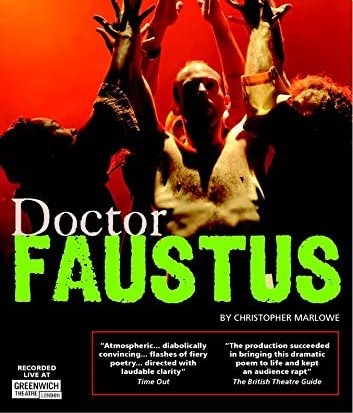 The production is a pretty safe rendition of the play and certainly one that could be used by students studying it as a set text. The only real deviation is that the costumes are clearly early nineteenth century rather than of Renaissance times and therefore Gothic in tone – more Doctor Frankenstein than Doctor Faustus. The set backdrop is Faustus’s library; learning is, of course, at the heart of the play. Faustus initially rejects the law, divinity, etc. in order to pursue the black arts and it could be said that the whole of the central character’s life is a continuous learning curve only coming to realisation when it is too late – we’ve all been there!

Gareth Kennerley makes a suitably inquisitive Faustus whose uncertainties about proceeding with his plan start to echo Hamlet’s indecisions. The problem, as always with this play, is that the central character spends a great deal of time playing practical jokes on the Pope and other dignitaries which after a while becomes plain tedious. I get that the point of all this is to show just how far Faustus falls from his grand plans and schemes to the point where he is playing tricks on a horse dealer but it does become rather repetitive – more Dr Fatuous than Faustus. Kennerley has much more room to flex his muscles at the start and end of the play as Faustus initially wrestles with his conscience and eventually tries to save his own soul. The big climatic speech at the end is well played leaving us wishing that Marlowe had gone for more of this sort of thing rather than playing to the gallery.

The other key role in the play is Mephistopheles which is one of those parts that can be played in a variety of ways. Tim Treloar makes him a figure of inner rage and contempt spitting derision at many of Faustus’ schemes and enticing him to waste much of his time on inconsequential nonsense. He is less a figure of temptation than I recall, indeed Treloar’s interpretation makes it clear that Faustus is a victim of his own folly as he fails to pick up on the clues which his demon more or less spells out for him. Treloar’s is a powerful performance that comes within a whisker of tipping the balance of the play – a refreshing and enjoyable interpretation none the less. There’s a great moment right at the end where he reveals his inner evil and this comes across well on film – I’m surprised that it worked at all in a theatre context.

The other ten members of the company play a variety of roles both human and diabolic with varying degrees of success. The various servant figures (Wagner, Robin, Rafe) keep the humour broad employing comic accents and overly expressive faces to try and paper over the weaknesses in Marlowe’s text. The tedious scene in the Pope’s Palace was not enhanced by trying to force the comedy and turning it, virtually, into the Keystone Cops. One scene which did work quite well (though even here I have seen it done better) was the parade of the Seven Deadly Sins which rightly avoided going for broad excess and was all the more successful for it. I felt that, as director, Elizabeth Freestone needed to keep a firmer hand on the tiller and employ some judicious cuts to highlight the poetry rather than the comedy of Marlowe’s text. 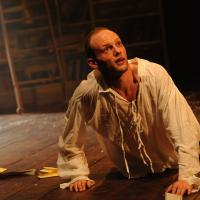 Dr Faustus was the subject of a personal piece of comedy/near theatrical disaster for me back in 2016 when appearing at Stratford in A Midsummer Night’s Dream (the tale is told here). The play was also one of my own A level set texts back in the day so perhaps familiarity does breed a degree of contempt. This production provided an interesting if hardly thrilling opening to Halloween week but if you’ve never seen the play before this isn’t a bad place to start.