What with #Lockdown2 and the instruction that all theatres will have to close again, this has been a weekend of reversals and disappointments. Thankfully, What A Carve Up! has not been one of them. I’ve been aching to see this production since it was first announced and the wait has been worthwhile producing, as it has, a totally unique and innovative form of online theatre which is properly exciting. And that’s on top of a first class adaptation, excellent direction, all-star casting and even a pre-show recipe card if you feel like adding a meal to your night out/in.

Jonathan Coe’s original novel is a savage take down of the Winshaw family and while they may be fictional, their ghastly real life counterparts live on amongst us. They are a tribe with fingers in every kind of greed satisfying pie of dubious moral provenance that you can think of. Political chicanery, arms deals, questionable banking and agricultural practices, responsibility for a crumbling healthcare system and having far too much influence on a complicit media are all grist to their collective mill. Coe’s book shines a brutally satirical spotlight on the 1980s era of “greed is good” Thatcherism. This version’s masterstroke, courtesy of adapter Henry Filloux-Bennett’s glorious script, is to bring things bang up to date and suggest how our current parlous state (including the pandemic fall out) is the result of the Winshaw’s avarice – or rather their real life equivalents. While the family’s collective murders in 1991 may seem a blessing in disguise, it is their biographer Michael Owen who is accused of the deed and, years later, his son wants to clear his name. Thus, the narrative framework for looking back and re-examining the case becomes Raymond Owen’s video testimony. Alfred Enoch (as Raymond) addresses the camera in a heartfelt monologue which shows the character keenly feels the loss of both his parents and adds to the actor’s impressively developing CV. 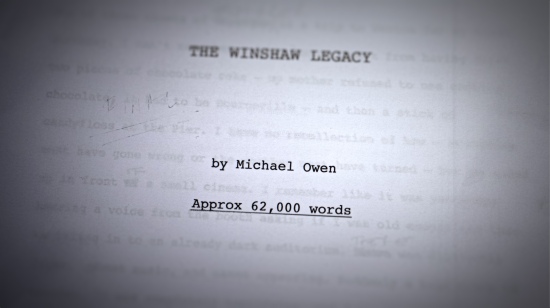 This is clever enough on its own but weaving through as a second strand is a TV interview which Raymond obsessively plays and replays; this is with a young surviving member of the Winshaw clan, the odious Josephine. A Katie Hopkins’ like figure with an ego the size of a planet and a marked disdain for the rest of the human race, she seeks to defend the ravages wrought on the country by her deceased relatives and trades on the fact that they met a grisly end to defend her own pernicious views. Fiona Button is remarkably good in this role and gives a pitch perfect performance. The scenes between her and journalist Tamzin Outhwaite are real stand outs; the latter, particularly, speaks volumes just with her restrained looks of incredulity at what she is hearing. As well as sifting through this video for clues, Raymond also investigates his father’s writings, looks back through family memorabilia and talks to a number of his associates and others relevant to the case. This unleashes a host of superb voice cameos from the likes of Stephen Fry, Derek Jacobi, Celia Imrie and Griff Rhys Jones and great fun is to be had playing “spot the voice”. And if that still isn’t enough, we’re also treated to the voice talents of Sharon D. Clarke, Robert Bathurst, Rebecca Front, Jonathan Bailey and Samuel Barnett. Just imagine any regular production attracting that calibre of cast.

This last strand gives the production the air of a radio play but by mixing in Raymond’s monologue, Josephine’s duologue, snippets of the film comedy murder mystery which gives the novel/play its title, some animation about debeaking chickens (I kid you not), fake adverts and dozens of pieces of visual evidence we are given a wonderful hybrid which does more than the sum of its parts. There’s even bang up to the minute satire (the pale shadow of its former self Spitting Image 2020 please take note) which links the ghastly Winshaws to Johnson et al….though even they refuse to take responsibility for the likes of Cummings. This all serves to retain interest throughout and replicates the oblique structuring, shading and tone of the original novel. The clever use of visual and aural repetitions in the editing provide a literary dimension which is often hard to replicate on film or (especially) on stage and highlights the considerable technical achievements of the extremely talented designers and editors. Director Tamara Harvey orchestrates the whole thing with confidence and provides clarity where it is needed even though the first twenty minutes or so may be confusing if you don’t know the book; but stick with it – I promise it’s worth it. I was left with the impression that this production may actually have created a new art form combining the best of all worlds and proving there’s life in the old dog yet. In this way it is a truly unique experience.

This was a fine way to finish this otherwise thoroughly depressing weekend; it’s perhaps ironic that the release date for the piece coincided with the debacle that was the announcement of the second lockdown – What A Carve Up! indeed. And so, my grateful thanks to the actors, creatives and technical wizards who worked on this and to the Barn, Lawrence Batley and New Wolsey Theatres for spearheading the charge into a brave new world. I was slightly dreading one of my favourite books of all time being handled badly but now I can’t wait for them to turn their collective attentions to another project – perhaps Coe’s sequel (of sorts) Number 11? Indisputably very highly recommended.