Having worked my way through about half of the Shakespeare canon during #Lockdown1 it seemed about time to get going with the rest. It occurred to me that, so far, I hadn’t touched upon the ten plays which form the Histories so what better way to start than with the earliest – that’s in terms of historical period rather than order of composition. King John must be one of the least performed of the Bard’s plays; indeed I’ve never seen it on stage and my sole interaction with it has been a TV version with, somewhat surprisingly, Leonard Rossiter in the main role. This videoed version was staged at the Stratford Festival in 2014/15 and before confusion sets in that is Stratford in Ontario, Canada not the more famous one upon-Avon.

What forcibly struck me is how much this is a drama of the absolute moment. For, deliciously, here is a play about a capricious and egotistical leader who refuses to relinquish his hold on the throne and let someone else get on with the job of healing the nation which he has done so much to tear apart. His tactics are divide and conquer and he sets himself up as a champion who will rid his people of the oppression of the Establishment – in this case the Catholic church. He has no respect for the women in his life, is a bully and a coward and demands that his ego be massaged at all points. Strangely, although he is tyrannical, he wants people to like him – and he thinks that they do. Now I’m not drawing any specific parallels here (ahem! ahem!) but even the colours fit, with the king preferring red and the opposition being dressed in blue. 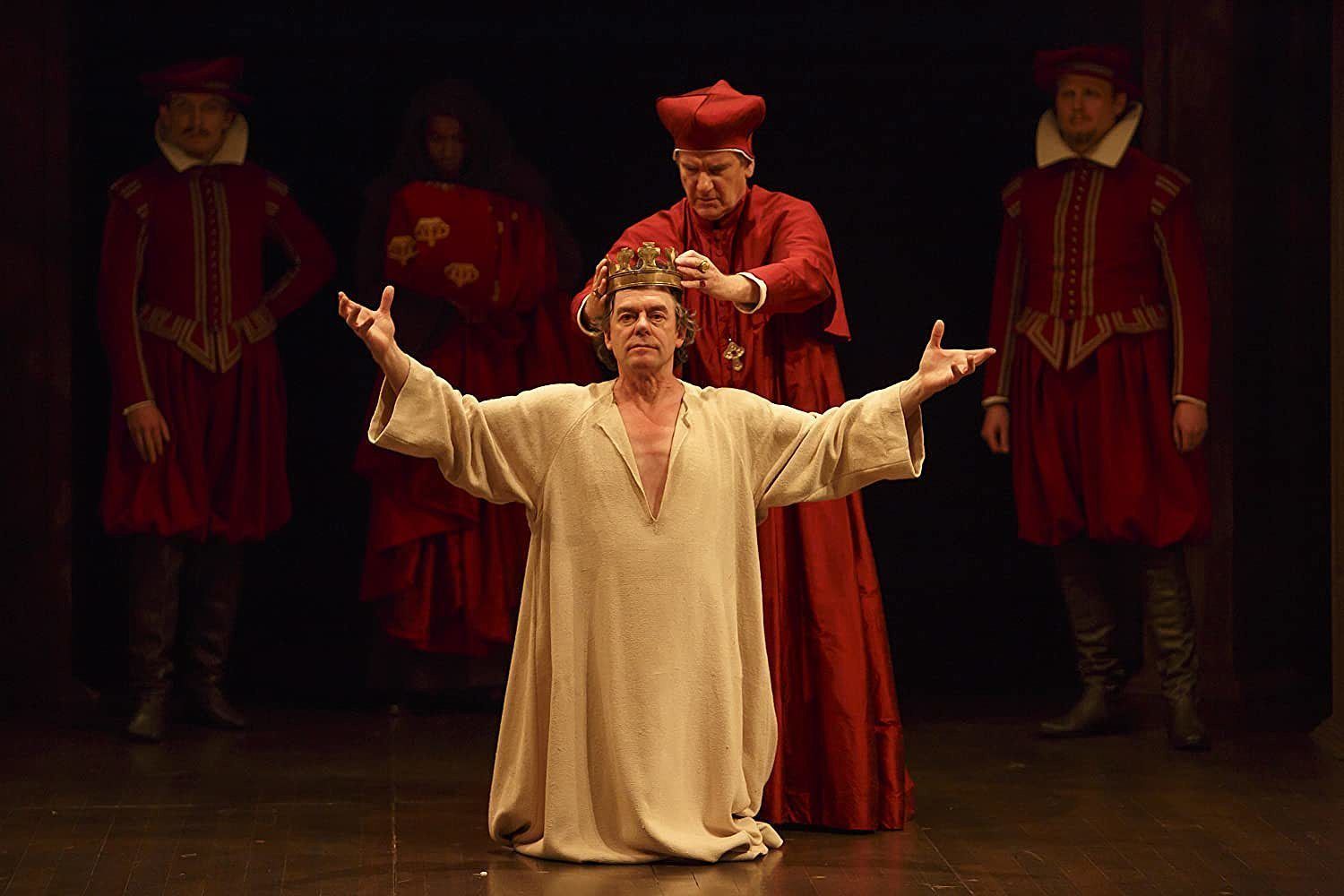 So, unwittingly as the production is about six years old, director Tim Carroll has made some really interesting choices which actually lift the play above its medieval/Elizabethan roots and make it a really pertinent moment to be watching it in 2020. But what of the Shakespeare original? Well, it’s not WS at his best but neither is it the stinker which it is sometimes cracked up to be. There’s a lot of infighting and politics to be got over and it’s as well to do some fact finding first about who’s who and what’s what in relation to claims to the throne, French sovereignty and the place of the Church in the scheme of things. But also, it’s a family centred melodrama as various figures are used and abused in the king’s fight to stay in power. In particular, it contains an examination of the bonds between mothers and sons – Eleanor and John, Constance and Arthur and Lady Faulconbridge and her two sons; fathers tend to be largely, notably absent. 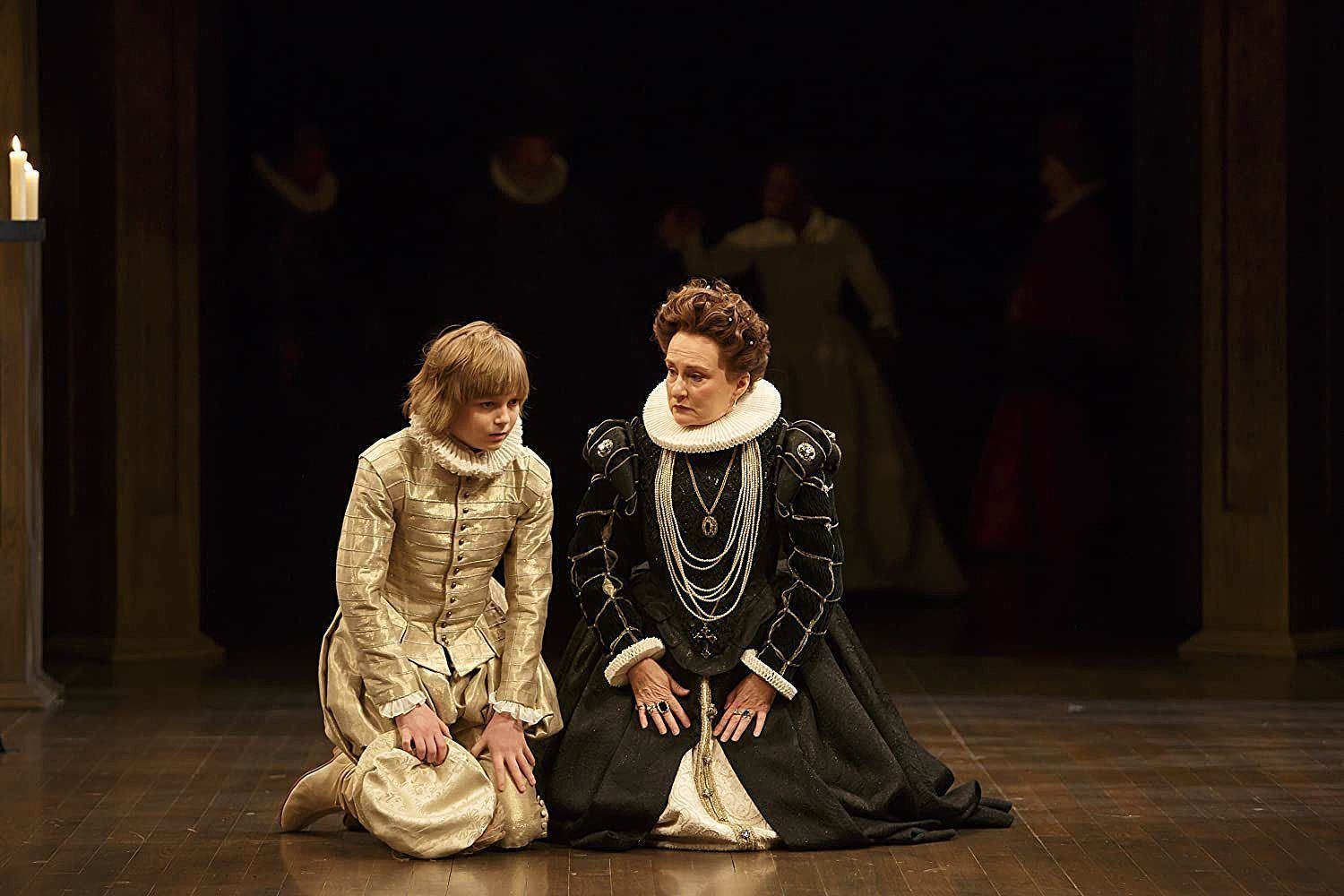 The production is solid in terms of acting and staging but perhaps borrows rather too heavily on the traditional Stratford (upon-Avon this time) way of doing things; it is not a risk taker. Possibly that’s all to the good as concentration can be given to the plotline which is generally less familiar. The title role is played by Tom McCamus as a spoiled dilettante forever living in the shadows off his two older and more capable brothers. He has none of the expected bearing of a king and has a somewhat affected manner of speech. His personality and physical defects (in this version he is subject to fits), his economic carelessness and his treatment of others mark him out as a most unsuitable leader and McCamus gives this full emphasis. His main adversary (until she suddenly is reported dead) is Constance. The name is a mark of the character as she fights to protect her son. Seana McKenna gives a technically highly sound performance though I never quite felt that the real soul of the character came through. Possibly the most interesting role is that of Philip the Bastard played by Graham Abbey. In what might be seen as a dress rehearsal part for Edmund in King Lear, the character is slightly to one side of the main plot commenting on proceedings and directly addressing the audience. Abbey gives him some of the cynicism of a stand-up comedian. The other winning performance comes from the conflicted Hubert of Wayne Best charged with the messy job of getting rid of Prince Arthur but finding himself unable to do the deed. The rest of the cast make for a solid ensemble who do a good job and diction is sound although some of the verse speaking is less so. Annoyingly there is a tendency to pronounce Dauphin as “dolphin” which is just silly.

Director Carroll is evidently a fan of “Original Practices”, and these can be seen to some extent here in the design choices of Carolyn M. Smith. The thrust stage is used well although the only scenic element is a pair of large upright candelabras such as would have been seen at the Blackfriars Theatre (not that there is any evidence this play was ever performed there); a gallery is used sparingly but effectively. Costuming is rich and sumptuous but echoes Tudor dress rather than the medieval period; this gives the production an appropriate degree of spectacle. Both halves of the performance are begun with appropriate musical introductions. Having now seen a faithful rendition of the play it strikes me that this is one which is ripe for possibilities of interpretation; indeed it is a pity that it can’t be remounted in the here and now as it’s time has definitely come and shows that Shakespeare knew what he was doing when it came to reflecting on the dynamics of political power in this country’s history or indeed more universally.