Back in April when I started reviewing online material, a lot of what was available to watch had already been filmed and put up on the internet prior to the lockdown. These ranged from sophisticated multi-camera captures of live performances as pioneered by NT Live to more prosaic “one camera at the back of the audience” recordings often never even intended for public release (so called archive recordings). These were liberally scattered around platforms such as You Tube and Vimeo and took some tracking down. There were also several streaming subscription services such as Digital Theatre and Marquee TV which specialised in polished and crafted productions tending to favour companies and theatres with the money to make such product. The introduction of Scenesaver has latterly provided a useful platform for more budget conscious productions. Then came Zoom which engendered straightforward readings of texts and gradually more sophisticated use of the developing technology – see The Show Must Go Online or the work of The Original Theatre Company. Great to have though all of this is, it took a little longer for real innovation in the art form to set in, but recent weeks have seen several examples emerging. Pre-eminent has been the production of What A Carve Up! developed by three collaborating regional theatres and which has been universally hailed as a game changer. It really pushes the boundaries of what might be deemed theatre and has pointed the way towards a brave new world until we can start reclaiming the old one.

Another innovative piece which I have only just discovered but has been around for a couple of months is User Not Found by theatre group Dante Or Die. Billed as “an immersive podcast”, this started life a couple of years back as a live event but has now been reimagined as an at home experience and an intriguing one it is. The piece examines what becomes of our online 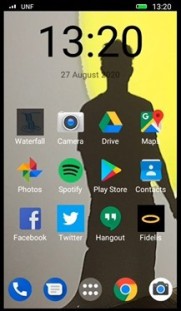 identity once we have passed on and left a heap of stuff on our social media platforms. Terry is sitting in a café one day when his phone starts to display messages of condolence from various friends. An ex of his, Luka, has just died and Terry discovers that he has been nominated as an executor of Luka’s online identity and therefore has to make decisions about retaining or deleting various accounts and their contents. What amounts to Luka’s life is on the internet and Terry has the painful job of making decisions about whether it should remain that way. Naturally this gives rise to a deal of reminiscing and exploration of what it means to lose someone close (unfortunately highly topical at the moment).

However, it is not so much the narrative arc and the themes that fascinate as the sophisticated design and lifelike experience that have been employed. The production mimics very accurately the experience of using a mobile phone and, indeed, benefits from audience members using that type of screen to watch the play. Headphones are also recommended – quite rightly as there is some very interesting use made of sound (Yaniv Fridel) which would be harder to appreciate over a loudspeaker. While it’s unusual watching and listening to a play in this way, it is what gives the piece its USP and certainly ensures that you are drawn into the narrative. I several times had to restrain myself from tapping a “Next” button on my screen in order to move things along. At one point my phone alerted me to a news update that Boris Johnson was self-isolating, and I momentarily wasn’t sure whether it was for real or part of the play – it’s that convincing.

Terry O’Donovan plays Terry (voice over only) and guides us through the experience. His soft lilting accent is just right to convince us that Chris Goode’s script, which is full of beautifully phrased language, is actually happening and that the invidious choices he has to make are a result of a combination of emotion and practicality. It also poses the question as to what we would do in the same circumstances. The whole thing is highly inventive and a feast for the eyes and ears as Terry scrolls through Luca’s Facebook and Twitter accounts finding messages, posts and photos which invoke some happy and painful memories. There is even a musical interlude as invented French pop star,

Laurent Mercier, sings a TV talent show inspired song which brings back memories. There are moments when the direction (O’Donovan again and Daphna Attias) gets a little self-indulgent and tangents seem to be taken simply to show off what the designers (Marmelo and Preference Studio) can do but in this instance I didn’t mind because it is all so fascinating. If you are looking for a true one-off this intriguing piece won’t disappoint and it’s available until the end of the year. Strongly recommended.

User Not Found can be accessed on You Tube. The advice is to use a mobile phone and headphones to enhance the experience– click here