It’s been a bit of a Gershwin week, this week – and nothing wrong with that. The other day I ventured into opera territory for Porgy & Bess and over this weekend it was announced that ballet/dance musical An American In Paris would be streaming on The Shows Must Go On. Opera and ballet in the same week? My, how my world is changing.  George Gershwin wrote the original musical composition with the same name in the 1920s and this was turned into a 1951 film with Gene Kelly and Leslie Caron. The stage show, though based on the film, has a radically rewritten book by Craig Lucas but retains many of the film’s musical numbers (though often with different contexts) with bonus and glorious songs from Gershwin and his brother Ira. To bring everything full circle the show finishes with a lengthy ballet to the original symphonic poem.

Based as it is on the film, what is immediately noticeable in this production is the use of a free-flowing style from scene to scene which rapidly moves events along. The stage is a constant whirl of set changing, all carried out balletically as the streets, the river, a fashion house, a chic department store, nightclubs, art galleries, a brasserie and a whole host of other Parisian locations are evoked. Gorgeous backdrop projections from 59 Productions start out as sketched outlines before developing into more fully realised paintings – this is a city where even the buildings don’t stand still. The ensemble is also in constant stylised movement whether as characters thronging the boulevards or as stagehands delivering furniture to the settings. The show opens and closes with full on ballet sequences under the eye of renowned choreographer/director  Christopher Wheeldon. The other filmic referencing is through the use of a Technicolour design pallet wonderfully realised by Bob Crowley (marvellous sets and chic 1940s costumes) and Natasha Katz (lighting). The whole production looks a million dollars (sorry, francs). Pleasingly though, it is not all froth, as a darker underbelly reveals itself through references to the recent  war (the show is set in 1945), the Nazi occupation of the city and their treatment of the Jewish population there. 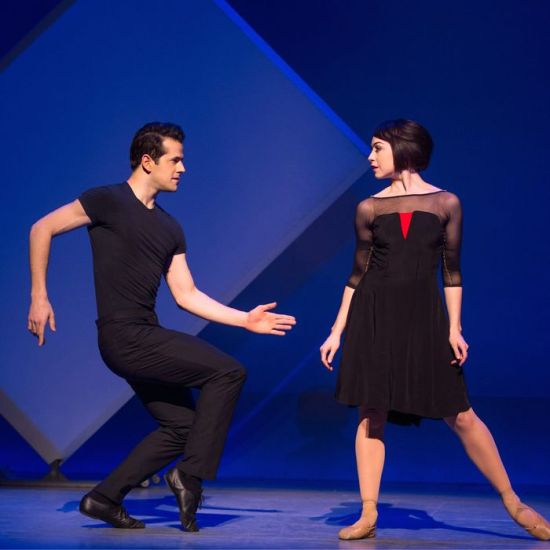 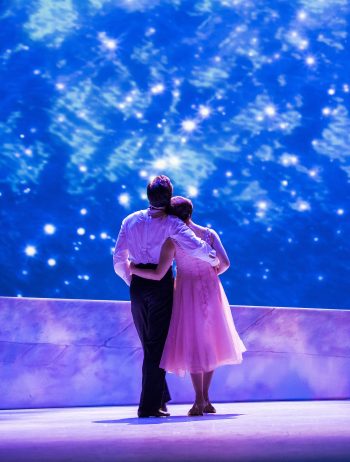 Evoking the spirt and, to some extent, the looks of Gene Kelly is Robert Fairchild as hero Jerry Mulligan. He’s an ex American soldier who has remained in Paris to pursue a career in art and design though clearly he’d have done better to join the Paris ballet as his dancing is so lithe and expressive. He meets and falls for shop girl, soon to be ballet dancer Lise (Leanne Cope) and she is clearly attracted to him. The fly in the ointment is fiancé Henri (Haydn Oakley) to whom she owes a debt of gratitude; though not particularly suited, he too has dreams of a career in the arts. One of the highlights of the second half is a dream sequence in which the full on razzamatazz is given to “I’ll Build A Stairway To Paradise” as Henri acts out his fantasy. Then there’s struggling composer and Gershwinalike Adam (David Seadon-Young) who also falls for Lise. Just to complicate things even further, rich arts patron Milo Davenport (Zoe Rainey) falls for Jerry. While the outcome is probably never in doubt this tangled web leads to plenty of soul searching on the part of all concerned but as these are decent, kind people all will be well in the end. It’s perhaps a pity that there’s not a bit more grit in this particular oyster as everyone being so thoughtful about everyone else’s feelings can get a bit monotonous. It’s left to Jane Asher as Henri’s snooty mother to represent the less salutary side of human nature but it turns out she has particular reasons for her manner and is really a pussycat at heart.

Asher aside, the cast may not be hugely well known but this works to advantage as the audience has no preconceptions about what to expect. Actually, I’m probably being a bit unfair as Fairchild and Cope are principal dancers for the New York and Royal Ballets respectively so it’s my ignorance of the art form rather than their obscurity that makes them fresh faces to me. And mercifully they can sing and act too – a double triple threat. What are well known are the songs and, as the Gershwins would have it, they are “S’Wonderful” regularly breaking out into full production numbers where no expense has been spared. The whole makes for a delightful though undemanding evening’s entertainment. The show is centred around notions of art struggling to survive in the face of personal and public adversity – and what could be more topical than that?

An American In Paris  is available today on The Shows Must Go On You Tube channel– click here. After that is can be found on subscription services stage2view – click here – and Broadway HD – click here

One thought on “An American In Paris (Online review)”