Whatever else may have occurred within the world of the theatre during the pandemic, nobody could remotely accuse it of being complacent and biding its time. Rather, the last year has seen a number of glorious innovations in form and content (e.g. What A Carve Up! and some ingenious interactive puzzle-solving pieces). Also prevalent has been the harnessing of modern technology as a means of communicating with a remote audience via our TV screens, our computers and our phones (e.g. User Not Found and The Ghost Caller). Two more boundary pushing pieces which have recently emerged are courtesy of relatively small scale companies ThickSkin and Darkfield Radio; indeed it has been companies such as these which have most consistently pushed the envelope.

The first of these pieces has been examining how virtual reality might be used to enhance the dramatic experience in Petrichor which is currently playing live at The Theatre Royal, Stratford East and can also be experienced online – naturally in the spirit of this blog I accessed the latter. It’s basically a dystopian fantasy piece in which a pair of people are caught up in a degrading and drudge like existence when the only three things which can be done are to work, to eat and to sleep. Nor is it clear exactly what that work is, but what is plain is that  it is repetitive and soul destroying. In return Petrichor (the system) will ensure that nothing bad happens to you – but of course neither will anything good. In the best traditions of this type of fiction and despite the odds, a relationship forms and the bounds of the system are tested as the pair connect.

Ayesha Fazal and Dominic Coffey play the couple who interact with the system and, eventually each other. The piece is wordless and so everything is conveyed through the protagonists’ movements which are fluidly expressive one minute and staccato and regimented the next. As an audience member you are at the centre of the experience with everything going on around you – a reverse theatre in the round if you will. Although I didn’t have a VR set, and I’m sure if I had the piece would have been quite remarkable, the 360-degree conception still worked on a tablet with sweeps of the finger bringing new perspectives at will. This aspect actually replicated the theatre experience where you can, of course, have an element of control and look at any part of the stage or actor that you wish.

To me the piece was about mood and a celebration of what technology can accomplish. The various members of the creative/technical team are to be congratulated on conjuring up a dynamic and hypnotic piece which draws you in and presents theatre in a wholly new way. The pulsing music which put me in mind of Jean Michel Jarre but was by Neil Bettles, is a major contributor to this. The show is badged as being created by directors/choreographers Jonnie Riordan and Jess Williams with animator Ben Walden which I think is noteworthy because it is evident that some key elements of drama such as a plotline and characters have been rather marginalised. I notice among the listed credits there is no writer or dramaturg mentioned … and this shows. If ThickSkin can only marry its dynamic visual sense to something more purposefully structured, I think they may be on to something. 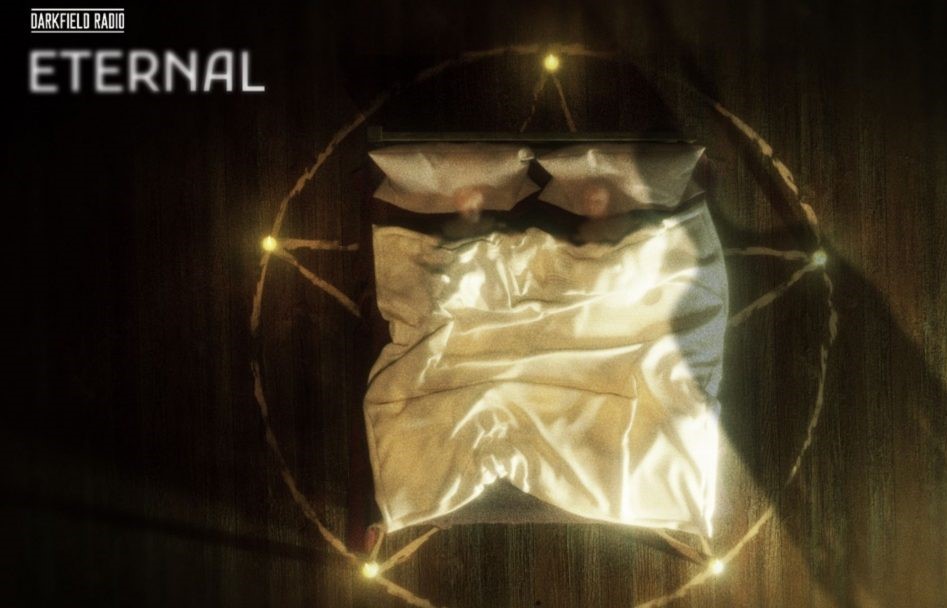 From a piece heavily predicated on the visual, to something which has no visuals at all, other than the ones 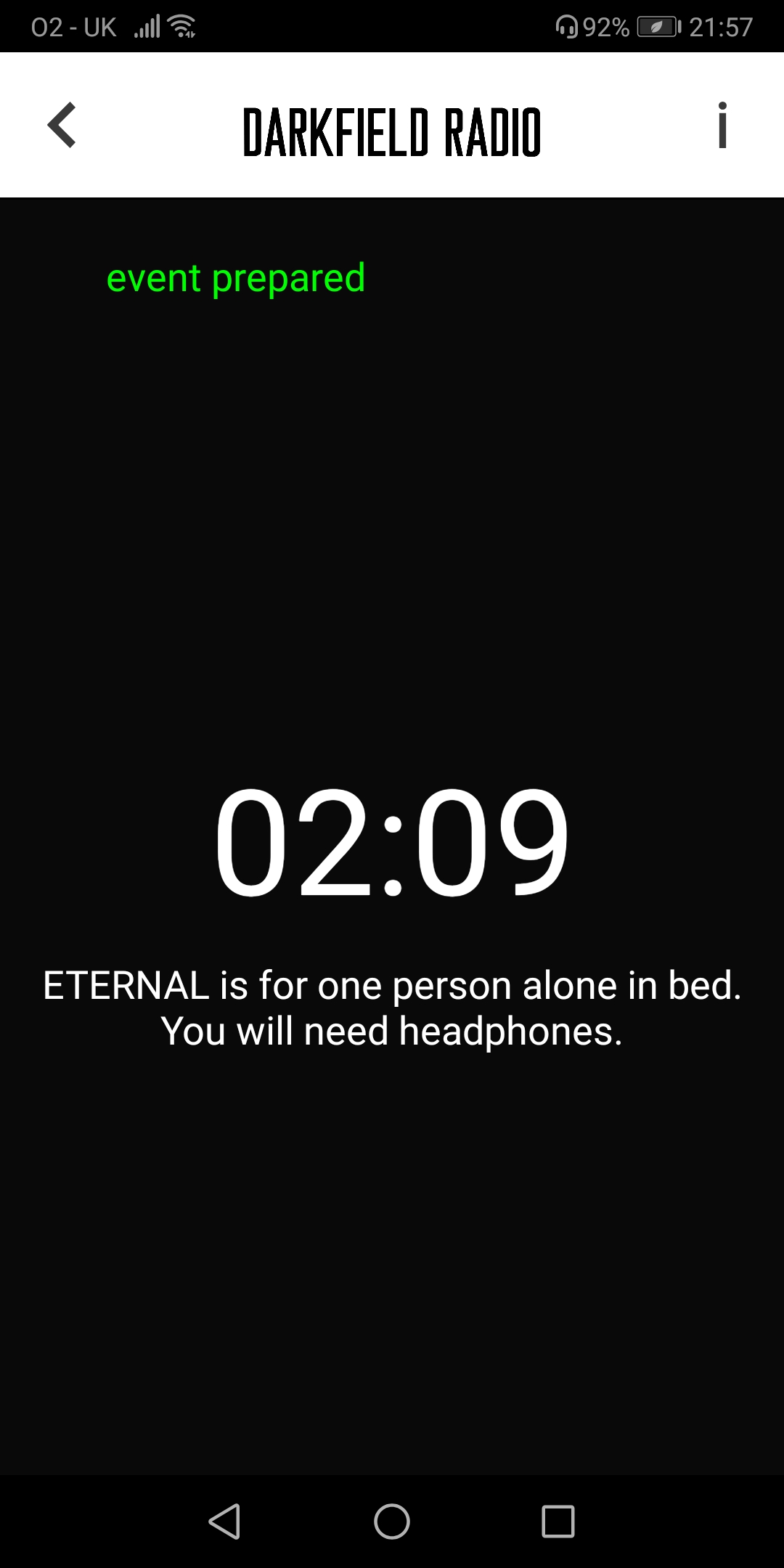 conjured up in your own head. Eternal from Darkfield Radio will provide you with plenty of those and late at night not all of them may seem particularly welcome. This is the third piece in a “site specific” loose trilogy from Darkfield – the other two Double and Visitors require a willing partner in the same physical space (your kitchen and living room respectively) to play along. In this instance you are on your own and the location of choice is your bedroom. The instructions at the start of the short play instruct you to lie down in the dark and close your eyes. From here Glen Neath’s script transports you to another bedroom …or someone/thing is transported to yours. The sort of faint but troublesome noises which you hear at the dead of night are replicated and a hypnotically lilting voice (Lloyd Hutchinson) relays a tale of horror that becomes genuinely disturbing. Although, unlike its predecessor above, this piece does have a narrative, I was more or less happy to forget about it and simply revel in the total creepiness of it all which was made all the stronger for the use of suggestion. The whole is complemented by David Rosenberg’s excellent sound tech which I’m sure would have you hiding behind the sofa if you weren’t already lying down in bed.

One thought on “Petrichor/Eternal (Online review)”