Considering the doors of the National Theatre have remained resolutely shut for most of the year, the organisation has had quite a reasonably busy time. The suite of  sixteen shows streamed weekly during #Lockdown1 has now been evolved into their at home on demand streaming service. The closure of Death Of England: Delroy the day after press night by #Lockdown2 also meant the play received a subsequent brief streaming outing and now the same fate has fallen their pantomime Dick Whittington which played just a handful of times before the introduction of #Tier4 restrictions curtailed further dates. The last performance was filmed and is streaming free for a few days as a Christmas present joint presentation from the NT and The Shows Must Go On You Tube channel before moving onto the former’s on demand platform.

The show is not a totally new one having been premiered at the Lyric Theatre, Hammersmith in 2018; the National have only ever put on one panto in its history and appears to have done what many a regional theatre does at this time of year and bought in their show. That said it has clearly been revamped and updated and is being performed with an eye to social distancing of performers. As the production is in the cavernous Olivier Theatre at least there’s plenty of room. The auditorium has been reconfigured as an in the round space – I’m not sure I’ve ever seen a panto in the round and am slightly dubious about the format’s ability to deliver in this configuration. Panto performers need to be able to engage with the whole audience at once not just parts of the audience at various times. This is particularly essential when the audience is also socially distanced and watching while masked up. The auditorium looked to be about only half full which certainly must have had an effect on both the players and the spectators. A panto really needs life, noise and interaction and the rather muted version of this we saw made the whole thing seem sometimes to be struggling to hit the right notes. 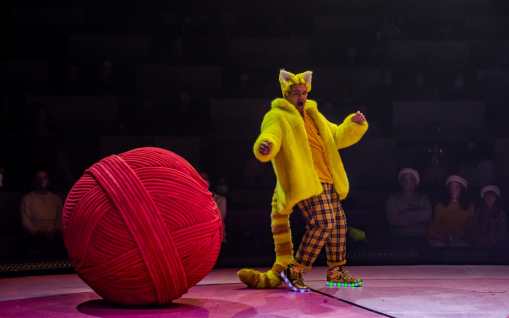 I’m  not totally sure that the script by Jude Christian and Cariad Lloyd really helps either. It has the usual slant of mixing innocent fun and filth as it mines just about every double entendre over the hero’s name; I did like the gag that it used to be William Whittington but he decided to change it because others kept shortening it inappropriately. For the youngsters there’s a talking cat, a fairy like spirit of London they can cheer and a hissworthy villain they can boo. For the adults there are some quite smart political jokes about elections and the virus so it’s difficult to say why it doesn’t quite gel. Where it comes into its own are the set piece routines (usually the Dame’s province) where the wit ratio is considerably raised. There’s a clever patter song set to a Gilbert and Sullivan tune about the ever-changing nature of Covid rules and another monologue which puns extensively on Underground station names. However, to truly get that you probably have to be from London and understand the referencing and this show is being streamed worldwide. Most panto takes place in imaginary fairy tale kingdoms or alternative takes on a real place (cf Aladdin) and although this show subscribes to the latter model its insistence on being a song of praise to London (presumably a legacy of its Hammersmith origins) tends to jar somewhat.

I suppose at times such as we are living through it is only natural for a family show to be optimistically slanted but I did find the “messaging” a little trite. In particular, it seems that all we need to do is pull together as a team to get through our difficulties – this aspect is particularly overegged. Talking of eggs (segue warning!)…the Dame’s full English breakfast dress is a riot and other colourful costumes by Georgia Lowe ensure that particular panto tradition is upheld. There are also some impressive props created by Debbie Duru and lighting effects from Jessica Hung Han Yun. Through its design elements, this panto certainly provides a feast for the eyes if not always the ears. Director Ned Bennett draws the various threads together successfully although I wish he’d got the scissors out to a show which could have done with losing twenty minutes or so. 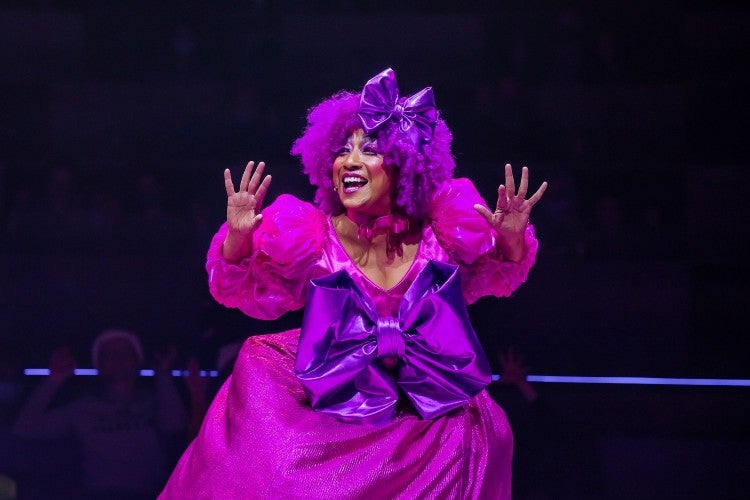 In the end, though, as with all pantomimes, it comes down to characters and delivery. Dickie Beau as Dame Sarah hits all the right notes and will please adults and children alike. Amy Booth-Steel as wicked Queen Rat is a pleasure to watch and, although I found Tom Cat’s dialogue annoying, Cleve September will certainly appeal to younger sections of an audience. Laura Checkley as Mayor Pigeon channels Boris Johnson’s ruffled appearance and speech patterns and on first entry recalls the time he got stuck on a zip wire. However, Boris ceased being Mayor back in 2016 so it’s questionable whether all this is all rather remote now. Lawrence Hodgson-Mullings and Georgina Onuorah as Dick and love interest Alice come across as rather anodyne although that’s not really the fault of the performers and Melanie La Barrie as Bow Belles adds an appropriate level of sparkle to proceedings.

I’m aware that this review has had a certain aura of “Bah, humbug” about it and feel a trifle guilty as the National have done a terrific job this year, but festive season or not all your humble reviewer can do is be honest and – in the end – it is just an opinion. This year the digital panto market is a pretty crowded one (see here) and there’s more arriving every day. The traditional season of excess has been replaced with something a little more sobering in 2020 but fortunately that doesn’t apply to online theatre. Compliments of the season to all readers/followers and here’s to a better 2021.

Production photos by The Other Richard

Other panto listings can be found here