For those of us who mourn the loss of theatre going opportunities and are searching for online content, the platform Scenesaver has proved a little goldmine of pieces which can be dipped into/savoured at length and has provided some interesting “finds”. It is also proving invaluable to those who, for one reason or another, can’t get to venues anyway. The eclectic range of content on there embraces a range of styles and genres and ranges from the homemade to the professionally shot. In a move to replicate the experience of the after-show discussion in the bar, they have also come up with the notion of a Theatre Club which meets at various times each week. I hope you’ll forgive a short ad break while I advertise a session which I am hosting tonight to discuss the play About 500 by Simona Hughes. Originally supposed to be playing live at last spring’s Vaults Festival, this piece was an early adopter of online theatre opportunities and was filmed with its original cast. It went on to win the very first OnComm award and I found myself reviewing it very positively (see here). If you’re interested in hooking up to the discussion then register with the cost free club (details here) and meet us at 8.00pm (UK time) this evening; you’d be most welcome. 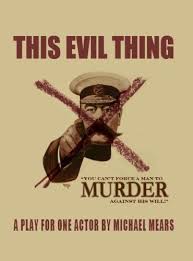 Right – advert over, now on with today’s review. This is for another OnComm winner on Scenesaver, namely This Evil Thing written and performed by Michael Mears. It is one that has actually been on my “to see” list since last summer and apologies that it’s taken so long to get to it – anyone would think I had something else to do! This is a one actor play which examines a somewhat scandalous aspect of the First World War which tends not to be spoken about when the horrors of that period in history are being highlighted. It looks into the plight of conscientious objectors (the CO’s as they were known), those young men who, answering the call of their consciences, refused to join up or be conscripted into what they saw as a state organised killing machine. The powers that be acted against them with draconian measures, fearful that their example might start a tidal wave of refuseniks. Although their numbers were a drop in the ocean compared with those who died on the battlefields, their story gives some fascinating insights into how they were regarded at the time and why their story has, largely, been buried.

Mears is a significant presence in this piece. Not only has he written the script, produced/directed the film, shot it all on a mobile phone and provided “extra sound effects”, he plays every single role – I’d estimate about 50 of them. These range from members of the armed forces, to politicians, to sympathisers, to commentators as well as the COs themselves; occasionally he also plays himself. All this is achieved with some nifty editing and use of simple costume changes and/or props. The central and most significant character is Bert Brocklesby, a Yorkshire schoolteacher and Methodist preacher who refuses to compromise his principals and becomes an absolutist refusing to do anything which might assist the war effort in any way – even scrubbing a bag of potatoes destined for the army cookhouse is refused. A softly spoken and stoical characterisation from Mears lends Brocklesby an air of certitude and determination and it is his (real) image which ends the play. 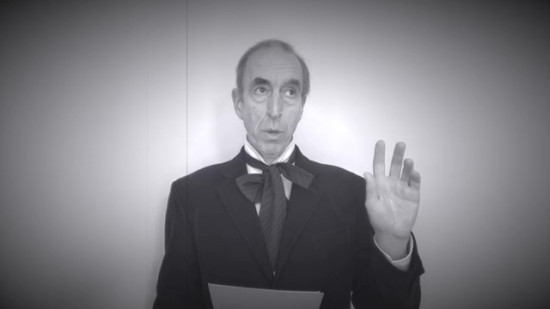 Elsewhere Mears conjures up the spirits of, among others, Prime Minister Herbert Asquith, proto-feminist and pacifist Catherine Marshall and  philosopher/supporter Bertrand Russell as well as a whole range of military types. For the most part, caricature is avoided and what comes across is a sincere attempt to reproduce and represent all sides of a difficult argument, one which still has resonance today. Although presented as a continuous piece the film is shot in six 15 minute episodes against plain backgrounds helping us to concentrate on the words. The overall simplicity of the presentation belies the complexity of the viewpoints being aired but what is certain is that this story of a group of young men, who in their own way exhibited extreme courage, deserves a wider audience. Mears’s committed and well thought out piece on a tricky subject is dealt with empathetically, entertainingly and consistently delivers.

This Evil Thing  is available via the Scenesaver platform – click here