Way back in the middle of last summer I spent most Tuesdays wandering around at the Edinburgh Festival; of course, that was virtually but I probably managed to see more than I would have done had I really been there. The result was four blog posts which covered a range of some 20 shows (click here, here, here and/or here). One of the big facilitators of this festival in the ether was the appropriately named Online@TheSpaceUK who have now returned with a second series of eclectic material with something to suit all tastes. 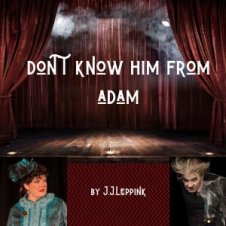 One of the companies that caught my eye in that first season was Blue Fire and their delightful short piece At The Ghostlight which linked the worlds of Shakespeare and Victorian music hall. The group is well represented this time round with two pieces and, as it’s always good to visit old friends, I thought I’d make them my first port of call. First up was Don’t Know Him From Adam by J.J. Leppink. It turned out that there was something more familiar about this than I might have supposed. One of the characters in the season one show was music hall artist Nelly Power and now here she is again in this new piece. In what is either a short play or an extended sketch (take your pick) she is interviewing a new company member, the titular and rather decrepit Adam. He seems a most unlikely candidate, even if he has spent some time hovering in the back row of the chorus in Gilbert and Sullivan’s operas at the Savoy. Coming across like a combination of (vocally) Harry Enfield’s Old Git character and (physically) the Julie Walter’s waitress in Victoria Wood’s famous “Two Soups” sketch he doesn’t even seem particularly keen to get the job. Lottie Walker (reprising her Nelly – not a euphemism!) is joined by Edz Barrett as ancient Adam and raise a few laughs at the expense of theatrical types. I followed this with Ally

Sloper’s Half Holiday by Chris Harris. This is another character from Victorian Britain, in this case the subject of what is popularly regarded as the first published strip cartoon. Steve Taylor brings him to life in a front of stage curtain short monologue which is pleasant enough but doesn’t really go anywhere. I wonder if the character provided the inspiration for W.C. Fields’ public persona. 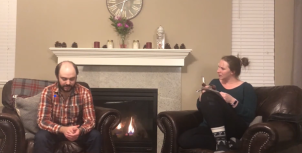 Another play I had watched last summer was from the company Flying Solo and they also have a new piece in this second season. Simply called Alive it features a couple (Ben and Caitlin Hilzer) who get into a degree of conflict when he brings an old urn home and declares that, after her death, he will use it to store his partner’s ashes. She’s not ready to face his intimations of mortality and reacts with some degree of disquiet “When I’m dead, I’d like to feel alive” she declares. Jenny Stafford’s relatively gentle comedy could have done with a bit more grit in the oyster to have made it all a little less cosily resolved – that said it was nice to see something for a change which didn’t involve the actors social distancing or appearing in Zoom boxes in separate locations.

Having revisited some old acquaintances, I thought I would conclude by picking something totally at random. This turned out to be Bard Overboard: A Global Pandemic Holiday Special 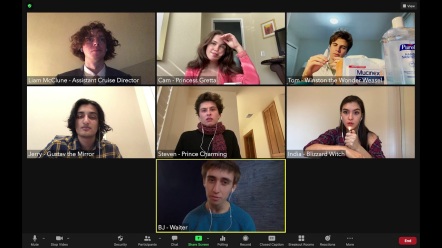 by Harris Solomon. It’s a Zoom platform piece about the preparation for and final results of a corporate message/advert for a cruise line. A group of actors, who are quarantining onboard, have been drafted in to provide the talking heads but they are variously inept, full of their own self-importance, bolshie or suffering from virus symptoms so look set to make a hash of the whole business. Add in some less than co-operative passengers and it becomes evident that the advert they are supposed to be making is doomed. Extra Credit Ensemble fields a young cast with plenty of energy who have provided the sort of comedy made popular in the UK with Northern Comedy Theatre’s Doing… series. I was puzzled by some of the badge names used on the Zoom call – it was never really made clear why India was dubbed The Blizzard Witch or Tom was also known as Winston The Wonder Weasel. As far as I can gather this is because you need to know about their main show – simply called Bard Overboard and due to premiere at Edinburgh – in which a group of actors try to stage an onboard cruise ship production of Hamlet to impress a Hollywood agent…. although that still doesn’t explain how witches and weasels come into it. Anyway, that aside, it’s a jolly enough piece which could do with some trimming but raised a smile or two.

There are over fifty choices of show currently on the site which range in length and content – just in case you think it’s all comedy, that was because of the coincidence of choices I made. They are also repeating a further fifty shows from the first season among which I would recommend After The Turn: The Mystery Of Bly Manor, At Home With The Brontës, At The Ghostlight and The Plague Thing. Your support for these smaller production companies is invaluable at this time and, whatever your taste, there’s bound to be something to appeal.