From a universally acknowledged outstanding body of work, which of Arthur Miller’s plays can lay claim to being his greatest? For most, it probably comes down to one of two; either the late 1940s drama Death Of A Salesman or the slightly later The Crucible widely seen as a parallel to the 1950s McCarthy hearings against alleged Communist sympathisers. A top notch production of the latter is available online which might help you make up your mind.

The play was filmed at The Old Vic in 2014 and is a powerfully staged and meticulously delivered production under the direction of Yaël Farber. It is also rather time consuming – well over three hours – but that is one of its strengths as this allows the pressure cooker atmosphere to build and build; besides, at the moment what else do you have to do? Before the dialogue even commences there is a highly charged seven minute opening sequence which introduces tension through ritualised movement and eerie sound tracking (Richard Hammarton) as the inhabitants of seventeenth century Salem enter the space. Their lack of communication emphasises the distances that have already sprung up in this community which will tear itself apart as they forensically examine each other’s reputations and integrity. And if that isn’t a metaphor for the US today then I don’t know what is. And that is far from being the only evident parallel. Concerns about the influences of religion, particularly those which deal in fundamentalism, are as pertinent as they ever were, as are notions about the role of women in the world of politics and the ability of rumour and gossip to gain traction in people’s everyday lives. At the heart of the story lies the repercussions of sexual infidelity and the strains this places on the ability to trust.

Farber’s cast probably couldn’t be bettered. As the Proctors, the couple at the heart of the drama, both Richard Armitage and Anna Madeley give performances that make you forget they are performing, so finely balanced and nuanced are they, particularly in the scenes where they are alone together. Armitage is like a coiled spring gradually unwinding. In the last half hour of the drama his guard is finally down as he gives emotionally draining responses to his accusers; it is a bravura turn which deserves all the plaudits it acquired and the fact that its raw power can still be felt via a screen makes it a definitive interpretation. There are equally committed and striking performances from Jack Ellis as Danforth, the man with real political power but terrified of losing it, and Adrian Schiller as Hale,  the sometime witch finder who ends up by examining himself  and finding himself wanting. Newcomer Samantha Colley gives a chillingly assured performance as Abigail Williams the leader of the young women and the self-induced hysteria which surrounds their increasingly alarming claims. With impressively choreographed writhing and hair swishing courtesy of movement director Imogen Knight, I don’t think these scenes have ever been better. Balanced against the youthful histrionics are the stoicism and determination of the older Salem inhabitants as demonstrated by Ann Firbank and William Gaunt. But really there are no weak links among the twenty plus cast who flesh out all levels of the society which is being pulled apart and almost destroys itself – parallels again.

Both the design by Soutra Gilmour and Tim Lutkin’s lighting capture the perceived Puritan ethic of the times and both elements emphasise the darkness at the heart of Salem in general and some of its inhabitants in particular. The look, sound and feel of the play gives the  impression that there is something monstrous lurking just out of sight, as there is though it is of human making rather than supernatural. The production uses an in the round configuration (this is very difficult to show/appreciate on video) which brings the audience right into the action and must have been a thrilling way to see this intense drama. 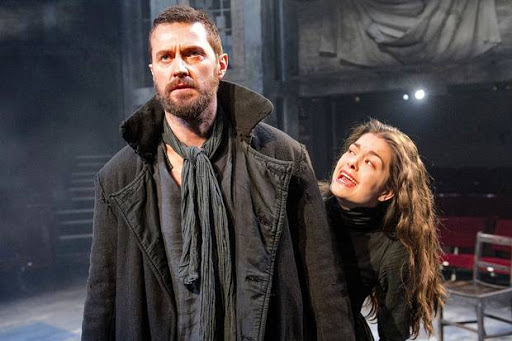 Farber’s powerhouse production is essential viewing for those interested in Miller’s work and is one of the few examples which can be found online currently, although the same platform is also showing All My Sons and there is an interesting version of Incident At Vichy which I have already reviewed (click here). Other than a couple of film versions there is, unfortunately, no sign of a Salesman to help answer the initial question; I guess you’ll just have to decide for yourselves. Meanwhile I can thoroughly recommend this particular interpretation of what has become a timeless classic.