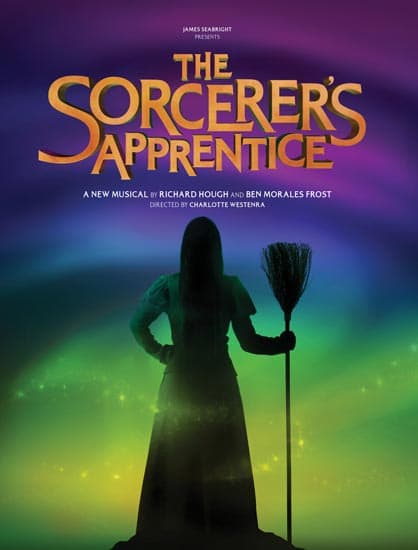 Is The Sorcerer’s Apprentice the first staged full length musical to receive its premiere online? I think it probably is, and that demonstrates just how far things have moved on from this time last year when no theatre would have contemplated such a thing. Unsurprisingly it is Southwark Playhouse who have scooped the honours after putting on quite a few smaller scale productions over the last year  (Before After, The Fabulist Fox Sister, Public Domain – all of which are still currently available). And they have done so in style.

The show is unashamedly old fashioned in its construction, plotting and characterisation though absolutely none the worse for that. It is basically a fable about good versus evil, though perhaps the latter is more a case of being misguided rather than out an out villainy. The rich Lydekkers own an energy-guzzling factory situated in the far northern town of Midgard. The problem is they are draining the Aurora Borealis and upsetting nature into the bargain. It falls to the town’s resident magician Johan Gottel to oppose the climate change deniers’ plans for expansion and he makes this his mission in between curing the locals when they feel unwell (they don’t do doctors In Midgard). Gottel, however, has his own problems in the form of a fractured relationship with his teenage daughter Eva. Needless to say, they eventually join forces to save the town/the world and forge a new understanding in which daughter will become apprentice to the father.

For those who know the original Goethe poem/Dukas music/Disney’s Fantasia you will already have spotted a gender swop for the main character. Together with the environmental concerns this gives the musical a somewhat more contemporary feel and allows the storyline to explore the father/daughter relationship. Eva is rather more feisty than Mickey Mouse ever was and the sorcerer himself (in the cartoon called Yen Sid – work it out for yourself) is portrayed as far from self-assured and all powerful. In order to overcome the baddies they have to work together and become more than the sum of their parts. Meanwhile in a direct parallel there is the mother/son relationship of Lamia and Fabian Lydekker. They too, have to come to a new understanding though they tend to do so through comedy rather than heartfelt soul searching. Families finding strength through working together also seems right of the moment.

Mary Moore as Eva makes her professional debut and does so sensationally investing her character with energy and real gutsiness. True she has one too many songs about finding herself/being true to her inner being etc., but these are put over with such aplomb and a fine voice that all else becomes forgivable. David Thaxton as Johan matches his stage daughter’s vocal prowess and, in their duets together, they soar to great heights. Dawn Hope and Marc Pickering make another fine double act as the capitalist Lydekkers who also, variously, come to understand the error of their ways and Nicola Blackman provides strong doubling as Mrs Arno, the local innkeeper and a magistrate. It’s a pity that the young scientist hero, Erik, comes across as rather underwritten, though Yazdan Qafouri makes the most of his opportunities.

As absolutely needs to be the case the staging by director Charlotte Westenra Is full of magical touches which would have even more of a wow factor seen live but still comes across pretty well on screen. I was concerned that the business with the broom(s) might have been swept aside (sorry!) but in fact it has been ingeniously repurposed and provides a great climax to the first half incorporating Scarlet Wilderink’s puppetry skills. If there are some occasional longueurs post interval, this is nothing that cannot be fixed. Richard Hough’s book achieves just the right blend of the traditional and the contemporary, comedy and drama and the score of Ben Morales Frost is delightful, even incorporating distinct nods to the Dukas composition in the broom sequence. Perhaps one less earnest ballad/duet and something more substantial for Mrs Arno and I’d say the balance was just about right.

The show is a real family musical and, undoubtedly a total breath of fresh air which manages to make some serious points about the way humankind is treating the world. Although I’m sure there was some disappointment about having to cancel/postpone the live premiere, Southwark has yet another hit on its hands which is fully deserving of a wide audience and perhaps streaming is the way to ensure that happens. As for the writers it is to be hoped that they will continue to refine this piece because I’m sure it would provide a substantial hit (perhaps next Christmas?) in the West End. Given that Disney also seem to be reinventing its entire animated back catalogue as live action films/musicals, the Mouse should certainly take a long considered look at this very good piece of family theatre.

The Sorcerer’s Apprentice can be accessed via Southwark Playhouse/stream.theatre – click here

One thought on “The Sorcerer’s Apprentice (Online review)”