Athena Stevens’ play Scrounger was produced at the Finborough Theatre early in 2020 and went on to win an Offie Award as Best Play of the Year. It also appeared online later in the year to general acclaim. This has now been followed by a piece deliberately designed with the online experience in mind, Late Night Staring At High Res Pixels. Initially broadcast as 28 separate episodes, one per day throughout February on the Scenesaver platform, the whole play now remains available for a further month. 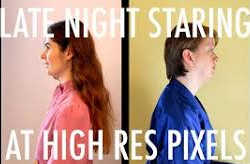 The piece is a two hander (with occasional appearances by a sleek looking cat) featuring Stevens herself and Evelyn Lockley simply known as A and 1 respectively. They find themselves drawn together in a triangular relationship with an unseen/unheard man simply referred to as he/him but who is older than both of them. 1 is having a relationship with him while A regards herself as his long standing BFF although it becomes increasingly evident that, for her anyway, she wishes their association could be deeper and more permanent. Through the course of what turns out to be quite a lengthy piece we follow the vicissitudes of their somewhat tangled interconnection and even though A and 1 start out by not knowing each other, they too form a bond. 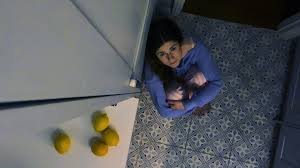 The play is constructed as a pair of monologues played out across an extended period of time and each episode features both characters updating us on the latest twists and turns. At three key points there are telephone call duologues as the pair catch up with each other and their relationship develops and alters. A particularly evidences some guilt as she feels she has colluded with the man by failing to condemn an action which precipitates the narrative. At a Sunday lunch with his parents, which she is attending, he suddenly shows her a topless photo of 1 which she has just sent him. Clearly meant for personal consumption, A fails to comment upon or demonstrate how inappropriate this is and, although she then claims to side with the victim, Stevens’ writing and characterisation of the role introduces doubts into the minds of the audience who may well feel she is creating her own agenda. 1, meanwhile, oscillates between a rather naïve trust and a sense of free spirited independence as regards the other two. As for the man, of course, we can only go by what we learn second hand although he would certainly appear to be both manipulative and coercive and cannot seem to understand why what he has done is unacceptable. 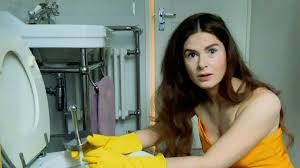 Lily McLeish’s clever direction ensures that there are plenty of changes rung throughout the various episodes as the two actors inhabit various locations in what I assume are their own accommodation. These settings also provide a kind of running commentary on the characters’ state of mind as we see 1 and A huddled in a stairwell or lying down in a state of depression – there’s actually a lot of lying down in this play. Visually, I particularly enjoyed the scenes where A is in her kitchen juicing some fruit in a blender and 1 is discovered furiously scrubbing the toilet bowl as they tell us of the latest developments. McLeish also makes use of interesting camera angles often shooting from above, just showing us a pair of legs or presenting us with an image that seems to be upside down. Form and content seem to be examining the situation from all perspectives. Anna Reid’s design and colour palette also offer some subtle indicators. 1’s world seems to be full of muted pastel colours while A’s seems rather more vibrant and assured, even if this is a front. 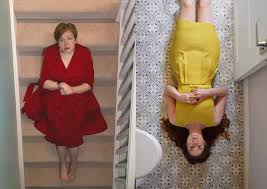 Late Night Staring At High Res Pixels is a dense and intense piece of work which examines the interplay of relationships but leaves the audience to come to its own conclusions about the motivations and intentions of the characters. Badged as “a series of asides” this is not a short play and I wish I had actually caught up with it on a daily basis (which to be fair was the creators’ original intention) as it was perhaps a bit too much to be taken in all at one go. If you start now you would just about be able to replicate the daily experience with a couple of days to spare – the difficulty will be in not skipping ahead to see what comes next.