Well, the day has finally dawned. One year ago today, March 11th 2020, was the date when the World Health Organisation officially declared that Covid 19 was a pandemic. It is also exactly one year ago today since I stepped inside an actual theatre for a live performance – Mischief Theatre’s Magic Goes Wrong, since you ask. It’s been a long old road since then and today’s online view/review will be the 490th since the whole shebang began; before that, though, it’s number 489. A few days ago, I watched an RSC production of The Merry Wives Of Windsor which I had previously seen live at the Barbican but hadn’t particularly enjoyed and, surprisingly found it more to my liking on a screen. Hoping that lightning might strike twice, I decided to go back to an RSC production of Cymbeline which I had also seen at the Barbican back in 2016 and see if a reacquaintance would improve my initial assessment. 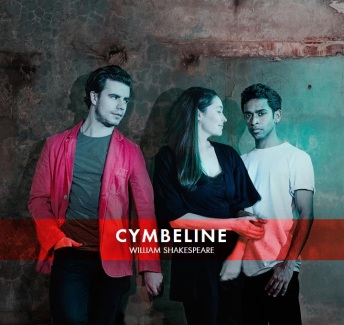 I have to say it didn’t. In fact, I’d go so far as to say I liked it even less than first time round. It really is rather a dog’s breakfast of a play containing elements and shades of Othello, The Winter’s Tale, King Lear and even As You Like It and I swear blind I heard a line directly borrowed from Macbeth. It rather begs the question was Shakespeare doing his late career “Greatest Hits” album? The plot is fantastical but not necessarily in a good way and like many another production in 2016, director Melly Still can’t help referencing Brexit – “Britain is a world by itself; and we will nothing pay for wearing our own noses” has more than a passing whiff of Farage isolationism about it and to make sure we get the point (we do!) in this production the separation has already happened. Thus the Ancient Britain of the original becomes a post apocalyptic world in which the remnants of a tree are preserved in a glass box, outsiders are condemned to live in a hole in the ground and even members of the royal family are forced into wearing Ugg boots or a shredded tutu – admittedly this last could still happen given recent events. Contrast this with the sleek cosmopolitanism of Rome where designer labels still rule and everyone is bronzed and chic; looks like the Europeans are doing very nicely, thank you. 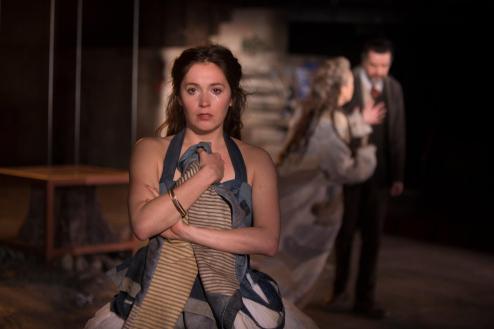 I couldn’t really engage with the heroine – Imogen on Innogen or whatever we’re going to call her – although Bethan Cullinane gives a sparky and often impassioned account of the role. As does Hiran Abeysekera as true love Posthumous channelling Edgar from Lear in the later scenes. It’s a pity that the most interesting character, Iachimo (Oliver Johnstone) basically disappears from the plot about a third of the way through cropping up briefly at the end, although to be truthful the whole plot about him testing Innogen’s fidelity in order to prove a point has ludicrous written all over it. There’s a good deal of gender flipping in this production and this is of the characters as opposed to the performers. Thus Cymbeline ceases to be a king and becomes a queen in the person of Gillian Bevan. It’s far from the most rewarding role in the play but Bevan brings a degree more credibility to the sorrow for lost offspring than a male actor might do. However, changing Cymbeline’s gender means that the monarch’s consort has to be changed from a Queen to a rather smarmy Duke (James Clyde) and as this is the possibly more interesting role it means that the male actor gets the better deal which perhaps partly defeats the object of the regendering to achieve some sort of equilibrium. Other traditionally male roles are reassigned (one of the two lost sons becomes a daughter and Innogen’s servant also swaps genders). Though there is  nothing intrinsically wrong with any of this, the play is difficult enough as it stands without adding extra layers. 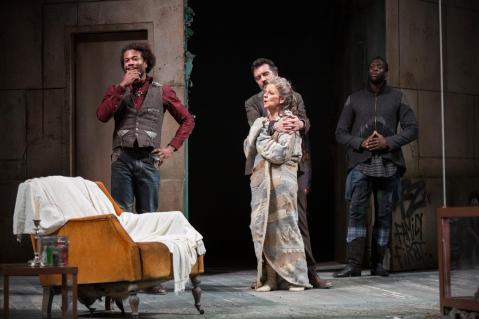 However, it was some of the production choices that really grated. There’s a stylish dance number to introduce the Roman setting (why?). Cloten and his cronies perform a cheesy boy band routine to serenade the heroine (amusing but intrusive). And sections of the text are translated into Latin for the relevant actors to speak but then the text is projected onto the stage in English so the audience can follow it. Except in this instance you can’t because the projected text is often not on camera. Anyway, I think we’ve all learned to accept that in a play actors playing foreigners won’t actually be speaking “in foreign”. And it’s not as if it is consistent; by the time the second half rolls round all the Romans soldiers talk to each other in perfect English seemingly having taken a crash Duolingo course during the interval prior to invading. Essentially there are too many ideas floating round in this production; it’s almost as though the text can’t be trusted to do the job. 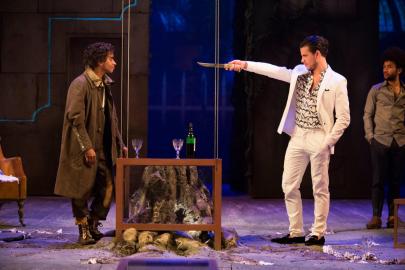 But it’s not all the director’s fault – Shakespeare too can take some of the blame. The opening exposition is convoluted while the final revelations are tiresome and contrived. Indeed can there be a more annoying closing scene in the whole of the canon? For well over twenty minutes it is a procession of people confessing to the part they have played in the unwinding of the plot and time is spent on each of them explaining to each other what has been going on for the last two and a half hours. As we in the audience already know, this is little short of tedious. Ah well, you can’t win them all especially when you’re rapidly approaching 500 plays in the space of a year.