I thought I’d revive a tradition – funny how the pandemic is only a year old and already I’m talking about something which happened just twelve months ago as though it has always been the case. In early April 2020 the National Theatre began releasing some of its back catalogue and Thursday nights became NT At Home Night for a glorious 16 weeks (for an overview and index to individual reviews, click here). Since then, this has morphed into their subscription service and I’ve watched a handful more of their offerings (Phedre when it launched and Dick Whittington and War Horse over Christmas) but never really got back into a regular routine. So, in a week that seems replete with various personal anniversaries, now seemed the moment to return to a Thursday night regular booking. Some of the site’s launch content has now been replaced but it is, of course, all high quality stuff; as ever, the question was where to start.

After much deliberation I plumped for Benedict Andrews’ production of Tennessee Williams’ Cat On A Hot Tin Roof which originally played at the Young Vic and was filmed by NT Live after it transferred to the West End. Unlike most productions of the play there really wasn’t much sense of a steamy Deep South atmosphere about the piece and the traditional antebellum plantation house has been replaced with a rather more representational and sparse setting by Magda Willi which drips with thematic symbolism. It consists of a bed covered in black linen (arid sexuality), a dressing table (appearances and masking), a fully functioning shower (ritual cleansing) and the backdrop is a sheer sheet of gold though grubby in appearance (dirty money). The traditional cabinet with the drink has been disposed of and the bottles are placed downstage along with a huge bag of ice foregrounding the importance of alcohol. 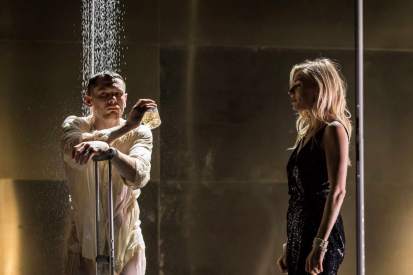 This is particularly so for the ex-athlete and symbolically crippled Brick who spends the entire play consuming whisky desperate for the “click” which will bring him oblivion. Jack O’Connell seethes with pent up emotion and bares his teeth in fury as he wrestles with his own nature and against the other members of his family. His wife Maggie (the cat of the title) is played by Sienna Miller who has a particularly tough job in the first act as the character rails against every aspect of her life in a litany of woes which, perhaps, becomes a little one note; I wasn’t sure if that was because we were supposed to be experiencing this through the lens of Brick’s perception. I’d forgotten just how much the character fades away during the rest of the play. Colm Meaney’s Big Daddy for me wasn’t … well wasn’t big enough. The character seemed to be far more thoughtful and even balanced than I recall and I’m not sure this didn’t devalue the melodrama somewhat. On the other hand, Lisa Palfrey’s Big Mama hits all the right notes making her loyalty to the family more touching and considered than I recall. Hayley Squires as acquisitive and calculating Mae is a standout amidst the secondary cast.

There are some blisteringly good moments in the play which director Andrews and his cast seize upon; this is especially true in the long second act duologue between Brick and Big Daddy as the latter wrestles with the younger man both mentally and physically. Indeed, this is a very physical production with the patriarch’s birthday cake being (symbolically – everything in Williams seems to be symbolic) trampled underfoot, ice being hurled around and Brick’s crutch being brandished as a weapon. The play has been updated but I didn’t particularly care for that especially as the text really hasn’t been; why reference a drinks cabinet that patently isn’t there? Besides in these more enlightened times it doesn’t seem realistic that Brick would have quite so much angst about his repressed sexuality and what others might think of him. One definite good choice though is the conclusion, Williams wrote two different endings, and this production goes for the right one. 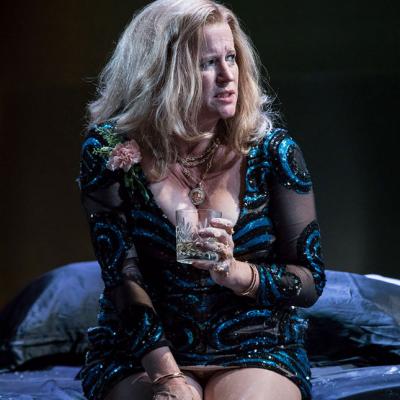 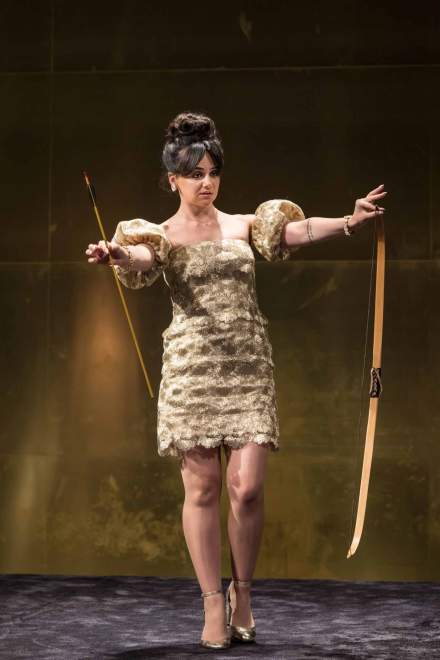 This is the second time Andrews has updated Williams’ work for the Young Vic, following A Streetcar Named Desire, and in both instances, I think he would have done better to leave well alone. Williams is very much a writer of his time who addresses issues which, while they are certainly still relevant today, gives us an insight into attitudes and perceptions at a particular moment. In the same way that you can’t really change the geographical location of the plays – how could you set a play like this anywhere other than the  Mississippi Delta? – meddling with the time frame is also somehow disrespectful. Despite some misgivings about choices, though, this is still a strongly cast and acted production with a clear rendering of the text and a distinct sense of purpose. It clearly demonstrates why Williams’ key plays are still so highly regarded.