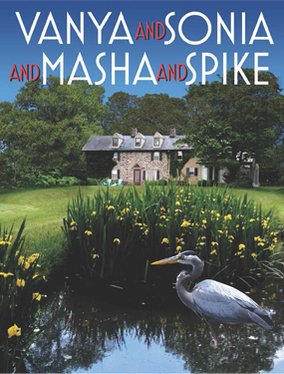 There has been a slight delay on the viewing and reviewing of this next choice of play … by about a year. Around this time in 2020 I had taken a red pen to my calendar and crossed through a number of shows which I was supposed to be attending but had been clobbered by the pandemic closedown. As it gradually became clear that this “temporary” measure was going to carry on indefinitely, the notion that any shows would be postponed for only a few weeks began to evaporate and the vast emptiness of the engagement diary became manifest. So, it seemed quite appropriate twelve months on to settle down to watch Vanya And Sonia And Masha And Spike which is currently being streamed by the Lincoln Center in New York.

As the play is American from writer Christopher Durang this was probably more appropriate than seeing it in London – at least there were never going to be any wobbly accents. I wish the same might have been said about the writing which veers from some rather mundane exposition via sitcom badinage to carefully crafted monologues from two of the central characters. Although popular in the States since the mid 70s, Durang’s work has never really taken off over here and although this is an undoubtedly clever piece, I think that, had it been staged, it might have garnered a rather mixed reaction*. That’s partly because it never really decides what it wants to be mixing Chekhovian melancholy with modern comedy and a family drama.

The main game to play is spot the reference – particularly to the Russian playwright. The three central middle aged siblings in this piece are all named (by their professor parents) for characters in Chekov and the girl next door is an aspiring actress called Nina who decides to nominate Vanya as her “Uncle”. Masha is a pretentious B movie actress and Sonia feels that her life has passed her by. The play is absolutely stuffed with shoehorned in references and semi-references to the plays; there is talk of an orchard of cherry trees, the family home is threatened with an impending sale, there’s an awkward performance of a pretentious play which one of the characters has written as well as many other passing allusions. It’s so referential and self-aware  that one of the characters declares ““I hope you’re not going to make Chekhov references all day.” Well, they are and they do and although this is fun it does become rather a tick list. And Durang is not content to stop there; in order to fully enjoy what’s on offer, the audience need to get references to Greek tragedy (the cleaning lady called Cassandra has premonitions which nobody will listen to), the work of Neil Simon (who also wrote a Chekov homage – The Good Doctor), the Disney iteration of Snow White and perhaps most oddly the films of Maggie Smith.

Kristine Nielsen who plays Sonia does a good impersonation of the latter and also delivers a touching monologue in the form of one side of a telephone conversation as she finally starts to come out of the shell into which her life has placed her. David Hyde Pierce has a withering way with a look that speaks volumes as Vanya. The actor doesn’t really have much to work with in the first half other than to bicker with Nielsen but after the intermission his terrible “work in progress” play written from the perspective of a molecule points out the character’s inability to achieve anything and ultimately leads to the high spot of the play. This a monologue/rant concerning the inequities, as he perceives them, of modern life as compared to when he was growing up; this includes playing video games, using electronic communications (“back then we used to lick stamps”) and dumbed down television. Hyde Pierce modulates the delivery of this and builds to a supremely comic climax – if only the rest of the play had been that good. Meanwhile Sigourney Weaver has great fun as the self-centred Masha delivering some stinging put downs with excellent timing and a good sense of character. Masha has dumb toy boy Spike in tow and Billy Magnussen seems to spend the entire show in his underwear.

Although I mostly enjoyed what I saw, the uneven tone (or rather tones) of the play stopped it from being a both a great piece of work and quite as funny as it thought it was going to be. I was somewhat surprised to see that it won six Tonys in 2013, including Best Play. Durang has said “My play is not a Chekhov parody…I take Chekhov scenes and characters and put them into a blender” but claims that knowledge of Chekov is not a prerequisite. However,  I would beg to differ. In rather the same way as watching Upstart Crow is only fully enhanced by getting the Shakespearean  references, so this needs at least a passing appreciation of what Chekov had to say; otherwise, the knowing laughs of (some) of the audience may remain a bit of a mystery.

*Just Googled to find that it has indeed already been staged in Bath – seemingly the production I was slated to see. Reception was, as predicted, mixed