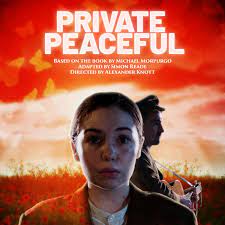 The Barn Theatre in Cirencester continues its short run of plays based on the works of celebrated author Michael Morpurgo. Following Simon Reade’s successfully stripped back version of An Elephant In the Garden they are now presenting a further Reade adaptation of the 2003 novel for young people, Private Peaceful. Like its predecessor (and indeed War Horse and Billy The Kid) this is a play all about war and its effects, though this time it specifically concentrates on the human dimension. It is estimated that as many as 250,000 under 18 year olds joined up to fight in the First World War (the minimum age was supposed to be 19) and Thomas “Tommo” Peaceful is shown as a typical example of how this occurred. In his case he wants to be alongside his older brother Charlie and they both find themselves shipped off to France and the horrors of trench warfare. In many ways the storyline follows an expected and (unfortunately) all too traditional curve as through the eyes of the brothers we are privy to the inhuman conditions and decisions that were made resulting in the indiscriminate slaughter of millions.

The play actually splits neatly into two halves with the first being an account of a bucolic though eventful childhood in the Devon countryside. The Peacefuls are an agricultural labouring family and Tommo looks set to follow in the footsteps of his forebears. His particularly strong bond with older brother Charlie is severely tested when they both fall for the same girl, Molly. She falls pregnant by Charlie and there is a hastily arranged wedding but it is 1914 and the storm clouds are gathering over Europe. Charlie enlists, Tommo pretends to be his twin, the authorities turn a blind eye, and the pair go off to war. This story is told by Tommo through a framing narrative as the clock ticks away the hours over one fateful night. There are just two performers in this play version with Emily Costello taking centre stage as Tommo. It’s a remarkable performance from the first female performer of the role and she is particularly good at creating the vulnerability of the young child growing up. Although she occasionally takes on other roles the bulk of this is carried by James Demaine. Principally he’s Charlie but he also gives us a whole range of other characters from an old crone to Sergeant “Horrible” Hanley. And if that isn’t enough Demaine also provides the accompanying music on a range of instruments; these are principally melancholic versions of songs popular at the time. There is also eerie use made of the nursery rhyme “Oranges and Lemons” which with its intimations of death is a harbinger of the final doom that awaits the brothers. Alexander Knott’s direction nicely differentiates the two halves of the play and the sections where Tommo reflects back on his short life so far as the hours pass are particularly moving. The technical design team of Sam Rowcliffe-Tanner (lighting) and Harry Smith (sound/music) create some very authentic feeling battle scenes with some stark spotlighting particularly highlighting the choices the characters are constantly making. Zöe Grain’s carefully choreographed movement direction also helps to create a sense of foreboding and tension as the actors move around the stage. There’s an interesting choice of props used periodically, as simple pieces of wood become weapons and model soldiers are used to represent entire battalions. This serves to remind the audience that many of the combatants are little more than children and that what starts out as a bit of a daring game ends, ultimately in tragedy. 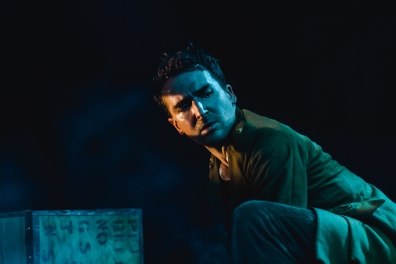 Michael Morpurgo has probably written more about war than about any other subject but makes no apologies for doing so: “War continues to divide people, to change them forever, and I write about it because I want people to understand the absolute futility of war. Wars are still happening today, and children see the effects of the suffering all around them”. Adaptations such as this help to ensure that the message remains strong and for that, among a myriad other reasons, this Barn Theatre/BoxLess Theatre co-production comes recommended.