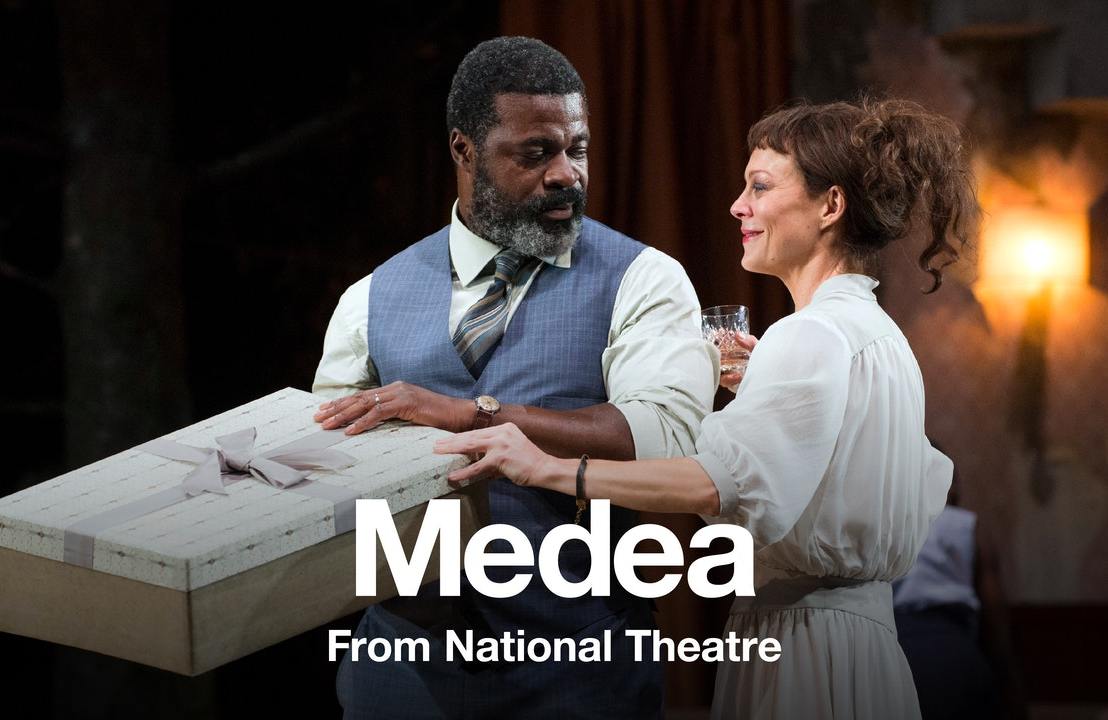 The recent sad death of Helen McCrory was perhaps rather overshadowed by the preparations of the funeral for the Duke of Edinburgh, but I wanted to mark her too early departure from life in some way fitting. It occurred to me that the National At Home collection (which I am watching regularly on Thursday evenings) is offering her 2014 rendering of the title role in Medea; viewing what was considered by many to be one of her major triumphs seemed an appropriate way to celebrate her prowess. Having missed the production in the theatre I was pleased to catch up with it and, especially, McCrory’s performance for she is on blistering form. 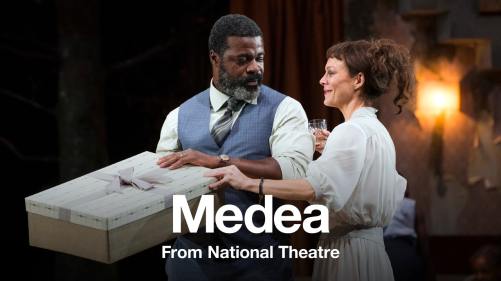 The tale of a spurned and embittered woman who slaughters her own children is one of those fundamental universal myths which strikes at the very core of what it is to be human – there is even a psychological complex named after her. In Euripides’ version of the story, we hear how Medea has betrayed her own father by helping Jason to steal the Golden Fleece from under his nose. She has also mercilessly butchered her own brother to facilitate the escape of herself and her lover who then marry and have two sons. But Jason has had a better offer – to marry King Creon’s daughter and so Medea has been abandoned. And that is all before the actual events of the play itself start to unfold. It’s no wonder, with a backstory in which the heroine has sacrificed everything for her passion, that revenge is high on the agenda. She embarks on a killing spree disposing of Creon and his daughter and even sacrificing her own children to exact revenge. Cannily though, she leaves Jason to survive in order to ensure that his guilt is maximised and his agony is prolonged. 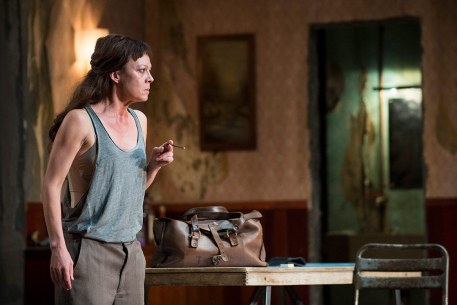 It’s 90 minutes of unremitting darkness and savagery but at its centre McCrory’s characterisation shines incandescently in a performance which commands the Olivier stage and must have been breath-taking when seen live. The character has to hit the ground running with some offstage screams of fury and then ramp things up until the pain and suffering become almost unbearable. Blood and angry tears dominate throughout, as across the course of the play the character becomes a dishevelled wreck both physically and mentally. In the final moments, literally shouldering the burden she has created and almost bent double by grief, McCrory exits into the mists to contemplate the enormity of what she has done. 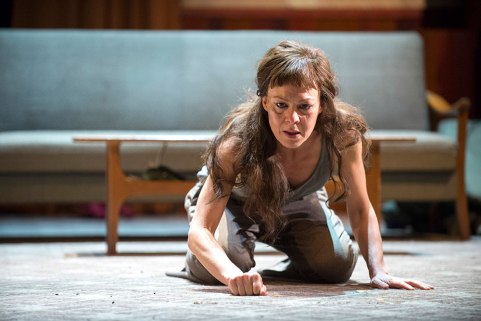 I don’t know whether it is the sheer force of McCrory’s performance throwing everything into sharp relief, but I found many of the other performances rather underpowered. I thought this was particularly true of Danny Sapani’s Jason who failed to convince that Medea would fall for him quite so strongly. Not so much an action hero as a wily politician there was definitely a need for an injection of charisma. Dominic Rowan as Medea’s ally Aegeus is also clearly a canny operator but only has one scene (albeit a key one) to make his mark. While Rowan does what he can I felt it actually held up the momentum of the main action. If this was a modern play, I think we would be looking to the writer as having presented us with an underwritten character. Michaela Coel’s nurse seems to be a sort of au pair. At the beginning she has the slightly thankless task of getting us up to speed with the story so far and, apart from some meaningful staring later on is unable to contribute a great deal more. 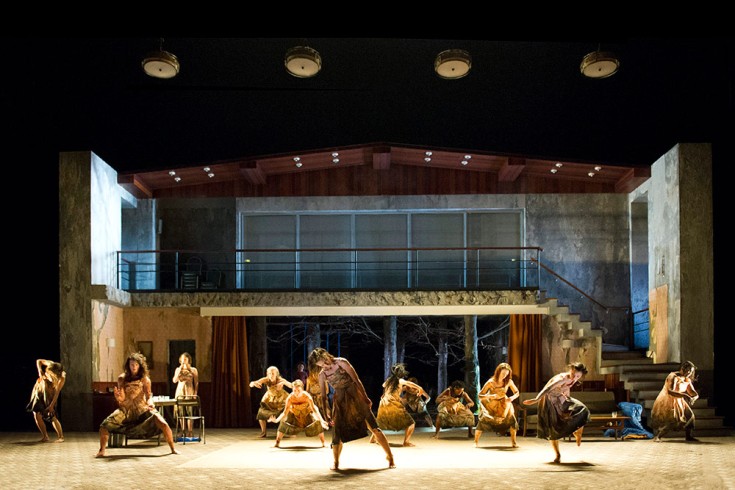 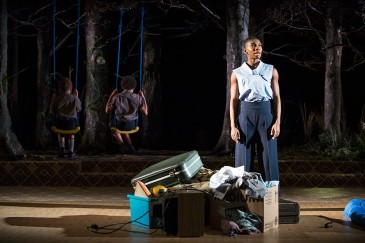 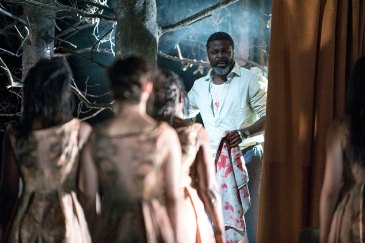 And then there is director Carrie Cracknell’s interpretation of the chorus of the women of Corinth. They are a diverse group and I presume the notion behind their selection was to present us with a tranche of female archetypes/stereotypes. This is fine and works well enough, but I found all the writhing/interpretative dance they are given to do by choreographer Lucy Guerin very distracting consisting, as it did, of a myriad of uncoordinated tics and jerks and with attitudinal poses being struck. To my mind, this added nothing and even detracted from the power of the dialogue in this muscular version by writer Ben Power. Tom Scutt’s set design is appropriately sparse in the foreground with a loomingly foreboding forest of trees in the background. Up above at a gantry level we see the progress of the royal wedding and subsequent deaths occurring which are otherwise simply described. I say “see”, but actually the filming here left rather a lot to be desired. Either the camera was on the speaker down below on the main stage or everything was in long shot behind somewhat opaque screens meaning that it was difficult to see. Usually, NT Live productions are models of visual clarity but this one failed to work in that dimension. 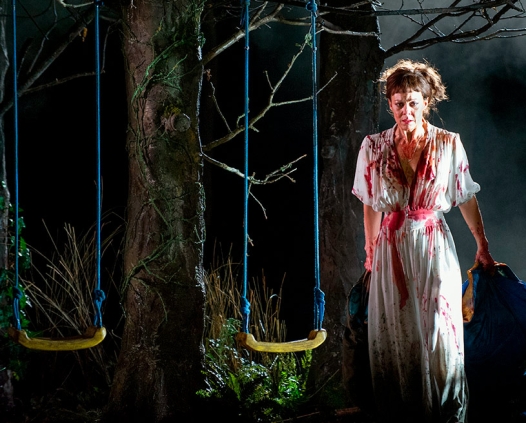 But in the end the evening is all about Helen McCrory and her devastatingly good central performance. I had hoped I would one day get to see her on stage but alas it seems that I have left it too late. Perhaps this is another reason why capturing productions digitally is a good idea because at least such powerhouse performances remain to go down in posterity and inspire others to help keep theatre alive.

Medea is available on National Theatre At Home – click here