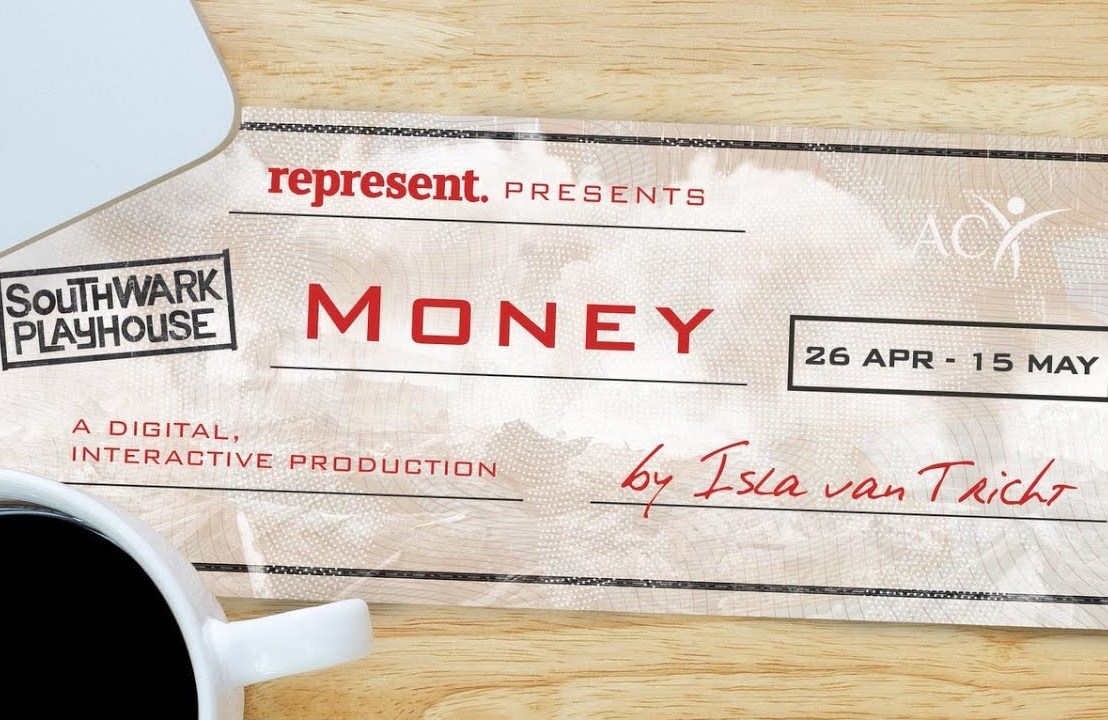 The whole business of financial donations is rather prominent currently, what with the government facing ongoing questions about the source and provenance of the money allegedly used to pay for renovations of the flat in Downing Street. It’s a timely moment therefore at which represent. premieres its new play about that very subject written by Isla van Tricht. Entitled Money, you can tell its fictional simply because unlike in real life we get to have a say in how things turn out – “ooh, a bit of politics” as Ben Elton used to say. For this is one of those interactive shows which canvasses the audience’s opinion and uses it to guide the ending of the play.

There’s more than a touch of a recent infamous viral video at the start of proceedings as various participants arrive for a Zoom meeting, talk over each other, find themselves on mute or realise that they have managed to badge themselves rather unfortunately; I half expected someone to utter the immortal line: “You have no authority here”. However, this isn’t Handforth Parish Council but a trustee meeting for The Nyoni Youth and Community Project. They are a relatively small localised charity but their CEO, Angela, has big ideas about expansion especially as this will honour her father’s legacy as the charity’s founder. She has an ongoing spiky relationship with the Chair of the Board Glenn but hopes she can rely on the other trustees (which includes us in the audience) to vote in favour of her latest announcement. And it’s a big one because she reveals that big business in the form of the Anders Corporation is prepared to donate a million pounds towards the inevitably shaky funding. 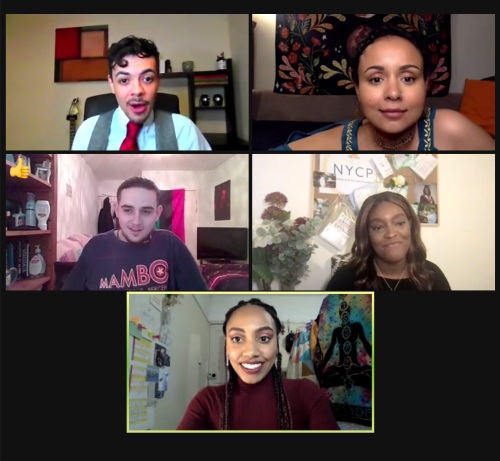 This is naturally a cause for celebration until trustee Kaia points out that the Corporation is ethically suspect having a heavy connection with palm oil production, responsible for deforestation on a massive scale, the likely resultant extinction of several species of animal life and numerous other crimes against the planet. She suspects the practice of “greenwashing” and from what we learn she is probably right. Backed up by the research of fellow trustee Avery they argue that the money should be rejected rather than compromise the principles of the organisation. Angela and Glen think the money should be accepted though they have rather different reasons for feeling this way. The other meeting attendee is Flo; as an employee she does not have a say but believes that the money may be being handed over for morally dubious reasons not unconnected with her personally. Essentially that’s the plot, the key moral dilemma being accept the money and use it to support good causes and worthy issues or reject it on the grounds that it is tainted. The audience listen to the arguments back and forth and at the end vote on a decision at which point different endings kick in.

The meeting is structured just like a real one with stickler chair Glenn laying down the law about protocols and agendas and at one stage pressing the eject button on one of the other participants (a real Handforth moment). Angela pleads passionately for her “baby”, Kaia takes the moral high ground. Flo is all bright eyed enthusiasm and I liked the irony that IT expert Avery was the one always on mute. At a couple of points all characters are invited to take time out to calm down by going off into breakout rooms and we are invited to follow them to listen in to their semi private conversations which gradually reveal a whole lot of backstory and various personal agendas. I wasn’t convinced that this worked entirely. Although I had the freedom to roam from room to room (an unusual and nice touch in itself) there was always the feeling that what was going on elsewhere might have been more important than what I was actually watching. So, it was perfectly possible to miss Flo’s revelations which might have swayed the voting pattern by being in the “wrong place” all the time. I was also less than enamoured with the discussion and revelations between Angela and Glenn which, I’m afraid, descended into contrived soap opera and which went on for far too long rather sapping the piece’s energy with its overuse of meaningful pauses.

represent. are an interesting and enterprising new company consisting of “people from lower socio-economic backgrounds, with a mission to open up the industry to those for whom it is currently inaccessible”. Aaron Douglas, Sarel Madziya, Nemide May, Loussin-Torah Pilikian and Adam Rachid Lazaar create memorable characters and seem very natural in their use of the Zoom platform; they are joined briefly by a filmed insert cameo from Mel Giedroyc as villain in chief Jennifer Anders. This cast do a fine job on an interesting play that just needs a bit of tweaking and tightening by playwright van Tricht and director Guy Woolf. Two of the main quintet are making their professional stage debut in this piece – the first time I recall seeing the claim that someone was doing so online which indicates just how mainstream this way of working has become. Hats off to Southwark Theatre for supporting this project and to the production for raising the profile of “green washing” by big corporations. I’ll certainly be choosing my shopping rather more carefully when I go to the supermarket this morning.