The BBC’s Lights Up festival has provided a highly eclectic mix of material in both aural and visual forms taken from commissioned and pre-existing work and released at a time when live performance has not been an option. It has majored, understandably, in monologues and I’ve worked my way through nearly all of these but had missed one of the first to be made public – largely because I was concentrating on finishing off the Shakespeare canon at the time and it had slipped through the net. This was Pale Sister a reboot of the Antigone legend but potentially interestingly told from an unusual perspective, that of her largely forgotten silent sister Ismene.

Antigone and Ismene are the two daughters/half-sisters of Oedipus (it’s complicated!) who find themselves under the rule of their uncle Creon after their two brothers – the sons/half-brothers of Oedipus (told you it was complicated!) have been killed. Creon refuses burial for one of them because of his treachery, a shocking insult in ancient Greek culture but headstrong Antigone goes ahead and inters the body anyway. Antigone suffers Creon’s retribution but, despite Ismene’s insistence, does not allow her sister to share her fate. For a fuller understanding of the original context, you might want to watch/read Sophocle’s Antigone first; there’s a version on the NT At Home platform with Christopher Ecclestone and Jodie Whittaker if you’re keen. However, as long as you’ve grasped the above you shouldn’t get too lost. 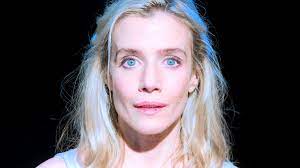 This version of the legend has been adapted and rebooted by Colm Toibin who  wrote it specifically for Lisa Dwan to perform as a monologue following their joint teaching of a course about Antigone at Columbia University. It started life as an audio drama promoted by Audible and then found its way onto stage in Dublin in 2019. In this video version she is directed by Trevor Nunn; I’d be interested to know what specifically he added to the party as the piece had surely already been refined by the time of his involvement. For Dwan is a very specific even stylised performer best known for her understanding and delivery of the works of that arch specifier Samuel Beckett (indeed Nunn seems to be going through a Beckettian phase at this late stage in his career – see here – and he and Dwan are due to gives us his Happy Days once theatres reopen). There’s a sense of balletic movement in Dwan’s performance with every gesture and nuance carefully choreographed and a firm emphasis on the language and sounds that make up the play – unsurprising given its origins. Although I can fully appreciate the care with which the actor had clearly prepared, I found it all rather mannered and rather distracting as the howls of anguish, the whistling through the teeth and the (admittedly haunting) wide eyed staring were clearly the product of considered over refinement. To put it more simply there was just nothing at all spontaneous about it; and I think even if this sort of thing isn’t “of the moment” it is part of an actor’s craft to make it seem so.

Ultimately, I found myself questioning just what the  point might be other than as an academic exercise (see above). Sophocles has already written a perfectly good play on the subject and one that has been revived for millennia, so what is to be gained by repositioning the narrative through the eyes of a minor figure that barely merits a mention in the encyclopaedia entries? And before someone points out that is exactly what Tom Stoppard did with Rosencrantz and Guildernstern Are Dead – at least that had the benefit of a few laughs. Pale Sister by comparison is unremitting in its gloom and despair and even though it may be sitting on a powerful contemporary message in showing how a voice can be given to the previously voiceless, I didn’t find it particularly inspirational and certainly not engaging…..Or maybe it was just a poor choice for a Bank Holiday evening!