With some dramatists you more or less know what you’re going to get – a Feydeau farce, for instance, is always a Feydeau farce. While there is some pleasure to be taken in that, it’s probably writers who push the proverbial envelope as far as form, structure, characterisation and dialogue are concerned which provide a broader picture of the variety of life and provide exciting dramatic experiences; Mark Ravenhill is one such dramatist. Once known as an enfant terrible of theatre and bracketed with artists such as Damien Hirst and Tracey Emin he has tried his hand at a number of genres. His last play, written and performed as a radio drama, is Angela which opened the Pitlochry Festival Theatre’s Sound Stage project earlier this year and has now been broadcast by the BBC.

It is unusual in that it is a highly biographical piece examining Ravenhill’s own background and development with little of the thrusting aggression which marked some of his earlier work. The title character is Ravenhill’s  mother who struggled with dementia and I had feared from the summary description that the piece might be a rather gloomy business. It was, however, absolutely delightful and although it certainly had its serious moments it was also full of humour and insights into being a family in the 1960s – an era I recall all too well. And the play is set against a shifting kaleidoscope of well known children’s tales (The Wind In the Willows, The Ugly Duckling, Jemima Puddleduck), songs of the time and classical ballet – which Ravenhill took up after his mother’s death a couple of years ago. For as much as anything else the play is a celebration of locally based arts and how they can enrich a life. There are some marvellous scenes set in and around a local am-dram group which Angela joins and then foists upon her boyfriend, later husband, Ted. He’s not keen and suffers from stage fright but in the more intimate moments when he reads a story to his young son and plays all the roles it is evident that he is a good actor.

Mind you he is played by the ever reliable Toby Jones so I guess acting ability is never really in doubt. Meanwhile Angela herself is voiced by both Matti Houghton and Pam Ferris in her younger and older incarnations. Although I wasn’t sure that I totally bought into them being the same person, in a way that didn’t matter as one of the play’s themes is the shifting of that slippery facet, identity. Ferris in particular is on top form as she plays the scenes of distress and emotion for all they are worth – it’s a great vocal performance. Ravenhill himself is also played by a pair of actors Jackson Laing (younger) and Joseph Millson (older) and the other sixteen featured characters by a  talented company of just six. Outstanding among these is Alexandra Mathie who, among others, makes an interesting character study out of Angela’s own mother.

She actually called her daughter Rita but in a bid to escape from something she considers a bit common, Angela insists on being Angela. This effectively forms a break with what the young girl sees as her old life and this is further emphasised as she becomes a leading light in her drama group and adopts any other number of guises. The play constantly reminds us about shifts in identity and makes the heart breaking moment when she cannot remember what her name is even more poignant. Her son follows in her footsteps too, hoping to alter his persona and become less of an ugly duckling and more of a swan. But the world is fraught with danger as represented by the character of the fox but also more realistically via some of the medical characters with whom they interact. It is this depth in the writing together with acute observation on family life which makes this play so satisfying and takes it out of the realms of just being a memoir. 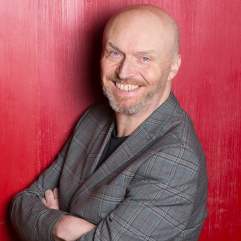 Having missed Ravenhill’s play first time round I was glad to find it in its original incarnation via BBC radio. I thought I would possibly listen to it in sections but so engrossed was I that I played and enjoyed it straight through. If the sun is still shining where you are, find yourself a pair of headphones and an open space and settle back for a real audio treat. Thoroughly recommended.