The Brighton Fringe online content contains a number of plays which deal with health issues (other than our dear friend Mr Covid), and I’ve already seen pieces on isolation, male mental health, OCD and sleep deprivation. These have oscillated between being instructional and entertaining with most containing a healthy (!!) dollop of both. Two  more to add to the same portfolio are Devil’s Food Cake which deals with the tricky subject of eating disorders and Insomniac – does what it says on the tin! 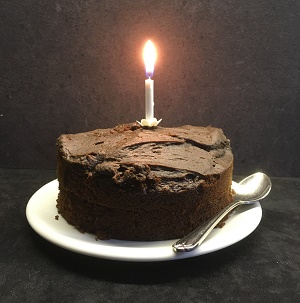 First formulated to contrast with the lighter fluffier and much paler Angel’s Food Cake, the Devil’s version is a super-rich moist confection oozing calories and differentiated from an ordinary chocolate cake by the inclusion of cocoa powder. It’s particularly seen at celebrations and, in the play by Marcia Kelson, puts in an appearance at Sophie’s 18th birthday celebrations. Although she tries to appear pleased it is an unwelcome addition to the menu as she has an eating disorder which prevents her from enjoying such an item. Kelson’s play shows the effect not just on the sufferer but also her support network in the shape of mum, dad and younger sister Katie who clearly has a healthy relationship with her food. The immediate family dynamic is enhanced by the inclusion of Jasmine, a therapist who is guiding the quartet through the trauma that affects them all as they care for, rage at and/or try to ignore the issue. The last “character” is the voice of the disorder itself – Ana as in anorexia who wheedles away at Sophie suggesting that she doesn’t have a health issue but is making a conscious lifestyle choice. Apparently pro-Ana content is rife on the internet and does untold psychological harm as does pro-Mia content – as in bulimia (click here for more). This is a clever conceit and really gets the message across as to why Sophie is ignoring her family’s pleas. 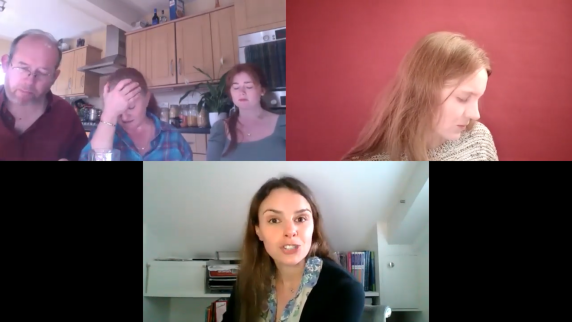 The production comes from the non-professional Putney Theatre Company who have had success with online work in the past with rather shorter pieces. They have clearly learned some valuable lessons from their experience and this rather better developed play does a good job in ticking many of the boxes. Eden Vansittart is very good in the central role and the two letters she reads out (pro and anti-Ana) will have you fully sympathising with her character. The rest of the family are played by what I presume is a real life family (they are all called Jones anyway) who are therefore able to sit around the same table for several scenes with particularly good work coming from Eliza Jones as the younger sibling who shifts between care and annoyance; this has a ring of truth to it. Sophie/Eden is in a separate video space but as she feels isolated from the rest of her family that works on an artistic level. I was less sure about the character of Jasmine who seems to have been constructed to hold the audience’s collective hand by explaining for our benefit what is going on beneath the surface. She makes constant analogies to the animal kingdom (the parenting is variously likened to a rhinoceros, a dolphin, a terrier, an ostrich, etc) all of which seems rather forced and unnatural. I have to say that personally I would find her style deeply annoying/patronising but that’s perhaps typical of that type of beast (now I’m doing it!) It’s a moot point as to whether the play or the situation is fully resolved successfully. 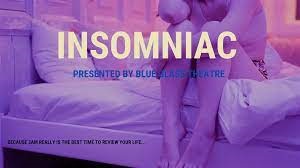 My second issues led play was Insomniac. I’m not going to say too much about it as it is badged as a WIP (work in progress) and, as such, it seems a bit unfair to judge the unfinished article. Suffice to say it is (currently anyway) a monologue piece in which the protagonist gets through the long hours of wakefulness by making endless cups of tea, watching the night sky and musing on her position. Strangely it shares the same background story about the record for self-induced sleep deprivation as another festival piece, The Final Approach – what are the chances of that? I feel this has definite potential as a first person account of a debilitating issue and I would encourage writer/performer Alexis Coward and production company Blue Glass Theatre to look into further development. Perhaps I was drawn to it because I’m currently going through a bout of falling rapidly asleep but then waking at dawn (officially 03:54 today if you’re interested) apparently known as sleep maintenance insomnia. Oh well at least I can get my daily review tidied away before breakfast!